I’m still travelling in far off places, but just a few pictures to whet the appetite of those who have been so eagerly waiting.  Thanks for your patience.  I’ve been longing to share with you all my experience, the sights and sounds of distant lands, obscure to North Americans but definitely very popular places to explore for those in other parts of the world.  I feel like a wanderer in the Tower of Babel, hearing a myriad of unknown languages, not only from the natives of those lands, but from the crowds of visitors around me.

The most amazing sight so far I must say is Petra, the city carved out of rocks, right in the red mountains of southern Jordan, about 3 hour’s drive southwest of the capital city Amman.  Petra was the land of the Edomites, descendants of Esau, twin brother of Jacob in the Old Testament of the Bible.  The ancient city was first constructed by the Nabataeans, and later came under Roman rule.  Earthquake and flooding had destroyed much of the city and it remained obscure for centuries until rediscovered by a Swiss explorer in 1812.

The ancient ruins of Petra was declared a UNESCO World Heritage Site in 1985, and named one of the New Seven Wonders of the World in 2007.  Excavation has been an international effort towards which Brown University’s archaelogy and anthropology departments have contributed substantially.  Follow this link to their fabulous website  http://www.brown.edu/Departments/Anthropology/Petra/

Petra was the location for parts of the film Indiana Jones and The Last Crusade (1989).  You might recognize the famous facade of the ancient temple (The Treasury) which is the entrance to this amazing city in the rocks.

(First a word about COPYRIGHT:  I’ve travelled far, walked great distances and ridden on a donkey to take the following pictures, PLEASE DO NOT COPY.) 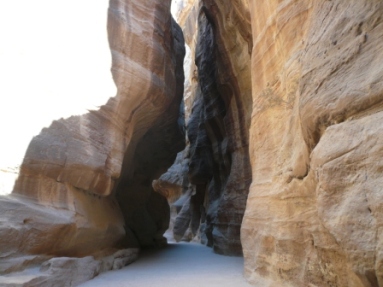 A glimpse through the crack:

The City carved out of rocks: 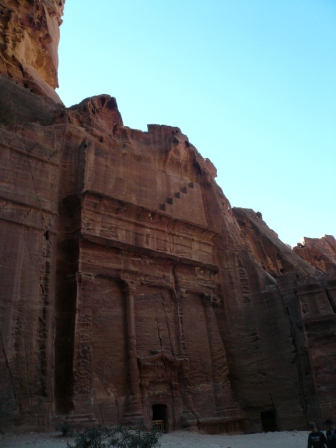 More to come in future posts.  Thanks for waiting.