If you’re reading this on a site that is not Ripple Effects, your’re reading a post that has been copied without permission. Stop reading and CLICK HERE to go to the original post written by Arti of Ripple Effects. https://rippleeffects.wordpress.com

OK, now that the little bit of housekeeping is done, we can start. Mind you, the above words are the only pink, or red, you’ll see here, because this is not your typical Mother’s Day post. I’ve checked on several Mother’s Day sites for good movie ideas. They’re all framed by pink templates. They all point you to movies as old as Gone With The Wind (1939), or as teary as Terms of Endearment (1983), or as dysfunctional as The Joy Luck Club (1993). I mean these are great, but, renting an old DVD for Mom on Mother’s Day? Hasn’t she seen enough Sleepless in Seattle (1993) on Encore Avenue?

By all means, take Mom out to the theaters to watch a movie on her special day!

And guys, you don’t have to sit there, endure and groan silently for two hours. Because here you’ll find iconoclastic, i.e., stereotype bashing, non-chick-flick-genre movies that you and Mom will enjoy watching. Who says mothers are naturally drawn to pink or chick-flicks anyway? I’m speaking from experience. Nothing can make me more proud than to have my teenage son accompany me to the movies. (Bravo to him for his boldness!) Yes, just mother and son. And nothing is more rewarding than to share an experience that we can talk about afterwards.

Here’s Arti’s list of current movie recommendations for Mother’s Day, 2009. As I said earlier, this is the stereotype bashing list, so you won’t see Shopaholic here. Thrillers, actions, sci-fi’s, dramas… who doesn’t need an adrenalin rush every now and then to keep the body functioning?

An absorbing story of corruption, deceit, and investigative journalism. The movie presents an interesting scenario: the old-school investigative newspaper reporter is pitted against the fresh-out-of-college blogger, both hired by the same newspaper to draw readership, a version of PC vs. Mac on the battlefield of journalism. When the female research assistant of congressman Stephen Collins (Ben Affleck) is murdered on the day of a crucial congressional hearing, Washington Globe reporter Cal McAffrey (Russell Crowe) is drawn into the search for the truth. He has to partner up, reluctantly, with Della Frye (Rachel McAdams), a pseudo-journalist/blogger. That’s the executive order handed down by their feisty and no-nonsense boss Cameron Lynne (Helen Mirren). As the investigation peels off layers of suspense, the pair is entangled with dangerous life and death situations. Adding to the intrigue is the role of Robin Wright Penn as the Congressman’s wife, and the colorful Jason Bateman as Dominic Foy, a crucial lead to solving the case. Mom would enjoy the performance by the stellar cast and the well edited screenplay. As to who saves the day at the end? I won’t spoil it for you… you deserve the credit for entertaining Mom. 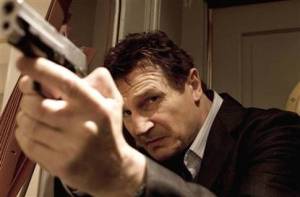 This may be in your second run theaters by now, well, so much the better. Don’t miss it on the big screen. After March 18, I look at Liam Neeson differently. Here in Taken, he embodies the superhero of parenthood. He shows us what a father will do to save his daughter, especially an ex-CIA dad against a human smuggling ring of bad guys. Bryan Mills (Neeson), a highly skilled agent who has retired early to make up for lost time with his daughter Kim (Maggie Grace), has to use all his resources when she is kidnapped while visiting Paris. The action-packed, fast-paced sequences leave you no time to be skeptical of the impossibilities. Mills’ expertly-trained speed and agility would make Jason Bourne drop his jaw (literally or figuratively). And, stand aside James Bond, you’re not in the league, it’s heart we’re talking about. Lose yourself, be swept away, it’s pure escape and fantasy. Any parent can identify with the fear of a child being taken and hurt and the feeling of helplessness that ensues. Liam Neeson just acts out the imaginary scenario, the omnipotent father coming to the rescue of his own, and he’s won my heart. (So remember, it’s great for Father’s Day too, but Dad will likely have to watch the DVD.)

Wolverine too hairy? Bad manicure? Bring Mom to Star Trek then, if she’ s up to pushing her way through the crowds. I’m sure she’d enjoy at least some elements of the movie. While you’re cheering for the young, new Kirk, she might be reminiscing the First Generation. This deserves a brand new post. So watch for it in the days to come.

Other recommendations have been reviewed on Ripple Effects. If they’re still on the big screen, Mother’s Day is a good time to enjoy them with Mom:

2 thoughts on “Movies for Mom”