There’s a story that goes like this.  The Times once asked its readers to send in their answer to this question: “What is wrong with the world?”  The writer, scholar, and theologian G. K. Chesterton sent them this reply:

“I don’t want to belong to any club that would accept me as a member.”

If only the Wheelers had had a conversation with Groucho Marx, maybe invited him to tea in their little white suburban house on Revolutionary Road, probably they could have avoided a tragedy.

In her mind, April Wheeler has dreamed of a club like this:

“I still had this idea that there was a whole world of marvelous golden people somewhere… people who knew everything instinctively, who made their lives work out the way they wanted without even trying, who never had to make the best of a bad job becasue it never occurred to them to do anything less than perfectly the first time.  Sort of heroic super-people, all of them beautiful and witty and calm and kind, and I always imagined that when I did find them I’d suddenly know that I belonged among them, that I was one of them, that I’d been meant to be one of them all along…”

The problem with the self.  What had taken G. K. Chesterton two words to identify, Richard Yates has shown with 463 pages (my pocket paperback).  No, I’m not complaining.  What has driven me to go on and finish the book, despite the ominous cloud hanging over its pages, is Yate’s marvellous prose leading me every step of the way, through every fight of the Wheelers’, every sardonic description of Frank’s New York office, their suburban social circle, and their self-delusion.  And even amidst the dark and grey overtone, the undercurrents of humor could sometimes make me laugh out loud (Having read the book, I’ll have to ask myself: am I being a snob for not using the acronym?)

Humor and irony are only ways of delivery, the message is still poignant.  I’ve enjoyed every visit John Givings goes to the Wheelers’ home during his half-day out of the insane asylum.  John’s mother Helen, the realtor who sells the Wheelers their house, only means good, bringing her son to meet some normal people to help improve his condition.  Yates is superb there in these scenes. As expected, the fool often comes out as the wise, the insane pointing out the truth. But you still want to go over the lines.

Knowing that Frank doesn’t like his job, John responds:

“Whaddya do it for then?   Okay; I know; it’s none of my business.  This is what old Helen calls Being Tactless, Dear. That’s my trouble, you see; always has been.  Forget I said it. You want to play house, you got to have a job.  You want to play very nice house, very sweet house, then you got to have a job you don’t like. Great… Anybody comes along and says ‘Whaddya do it for?’ you can be pretty sure he’s on a four-hour pass from the State funny-farm; all agreed.  Are we all agreed there, Helen?”

“Oh look, there is a rainbow,” Mrs. Givings said…

But of course the problem is complex.  While we are all free agents of our own actions, we are also products of our circumstances and our past. The setting of the 50’s is a time of suburbanization, post-war peace and affluence. But the story could take place anywhere, anytime. When offered a promotion at work, Frank chooses to stay rather than opting for a loftier dream.  Substitute now for the 50’s, who would notice?

Frank and April Wheelers and their two children are the perfect example of the young and wholesome family enjoying the good life, in appearance that is.  What’s troubling them is legitimate, of course. What’s the point of being a nut screw in the machine of Big Business and a willing hostage of conformity and suburban ennui?  April might be fulfilling a self-serving and snobbish desire to move the whole family to Paris, but she could be right that Frank needs to be given the chance to ‘find himself’.  What she fails to see though is that she’s the one who could benefit from such self-reflection even more.

John Givings has more pointed words for the Wheelers in his next visit, which ultimately leads to the collapse of everything.  Yates’ writing has taken me captive.  The last hundred pages of the book have me glued to the seat.  It was already dark outside, I was sitting on a couch reading, alone in the house.  The feeling I had while going through those last chapters was no different from my experience of watching The Silence of the Lambs some years earlier, also sitting alone one night in the same spot… although there’s no similarity between the content of the two.  Haunting, eerie, disturbing…. now this is with me having watched the movie before reading the book.

Revolutionary Road is my first Yates book.  While I’ve admired his writing, I’m not so sure I’ll seek out his other works…  You see, I’ve always thought The Silence of the Lambs is a first-rate movie, but I would not want to see it again and again.

Leonardo DiCaprio and Kate Winslet reunited since Titanic (1997) to play the Wheelers in Revolutionary Road.  On the outset, they are perfect for the roles: Frank the charmer, April the golden girl.  And to top it off, the movie is directed by Sam Mendes, who has brought us the Oscar Best Picture for 1999, American Beauty, another brilliant suburban commentary.

Supporting roles are well performed by Kathy Bates as the talkative realtor Mrs. Helen Givings.  And Michael Shannon deservedly got an Oscar nom for his portrayal of Mrs. Givings’ son John, the lucid lunatic on a day-pass out from the insane asylum. 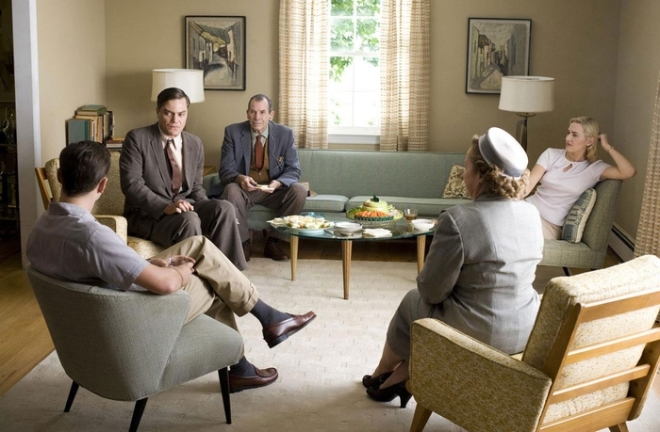 But somehow I feel there’s a significant discrepancy in the characterization that has shifted the dynamics between Frank and April.  As a result, the movie offers an altered view.  April here is a victim of circumstance.  She is portrayed as the courageous one who sticks to her goal, even heroic as Mendes says in the Special Features.  No suggestion of smugness or self-delusion, but rather, she is clear as crystal about her situation. Winslet has such cinematic appeal that her April is a much more amiable character than the controlling and self-serving dreamer and schemer I see in the novel.  And here, Frank is the conforming realist, the bully that needs anger management, the one who lacks the guts to embrace change.

While the storyline and scenes are faithful to the source material, the altered characterization of April Wheeler has subtly changed the premise of the novel.  What we have here is simply a love relation gone wrong.  A tragic drama of incompatible expectations, the conflicts between the progressive, idealistic and unfulfilled suburban wife, and the temperamental, gutless husband who has given in too easily to ordinary life.  The complexities which Yates has so marvellously detailed are absent here:  Was there any love to begin with?  Are dreamers necessarily superior than realists?  And, on what do we base our choices and actions?

What initially sparks off the romance between Frank and April and which sustains their façade can be summed up in this sentence from the book, and which, of course, is absent in the film in any nuanced form:

“Sometimes there was a glint of humor in these embraces of the eye:  I’m showing off, they seem to say, but so are you, and I love you.”

All the more reason to read the source material after watching a movie.

DVD Special Features include commentary by director Sam Mendes and screenwriter Justin Haythe, and Lives of Quiet Desperation: The Making of Revolutionary Road.