Here I go again, the annual Book Sale at Crossroad Market, organized by the Servants Anonymous Society. It’s a worthy cause, therefore, guilt-free looting of good condition used books, over a million of them donated by citizens like me. But I must say, I haul back more than I donate over the years, for many of them I plan to keep.

Compared to the last few years, I’m a bit more restrained this time. Here are some of my loot, all trade paperbacks for just $2 each: 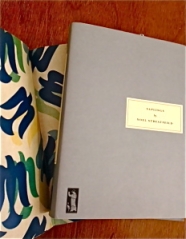 Saplings by Noel Streatfeild — I picked it up right away as soon as I saw the grey, minimalist book cover. Delighted to find inside is beautifully designed. Look at the photo I shot on the left. You can see both the dust cover and the inside of the book cover. This is my first Persephone Book, publisher of neglected women writers. I’ve not heard of the title or the author, but trust the London publisher’s choice, and glad to find it in such a mint condition at a used book sale, I quickly grabbed it.

Parade’s End by Ford Madox Ford — Truth be told, I’d never heard of FMF until I read Hemingway’s A Moveable Feast a couple of years ago. What a name. The only one I can think of along that line is… William Carlos Williams. Anyway, BBC’s adaptation of Parade’s End as a TV mini-series has added another name to my list of favorite actors: Benedict Cumberbatch (Again, ‘what a name.’) In these dry months in between seasons of Downton Abbey, Parade’s End makes one satisfying treat.

Villette by Charlotte Bronte — Here’s another reason for buying a book because of the publisher. I’m a collector of The Modern Library Classics. So finding this in the Classics section in the book sale was a pleasant surprise. A. S. Byatt offers her views in the intro. Other than Jane Eyre, I’ve not read anything else from Charlotte Bronte. Have you read this?

The Matisse Stories by A. S. Byatt — Three stories about three art works by Matisse. A beautiful little book. This from Goodread’s description: “These three stories celebrate the eye even as they reveal its unexpected proximity to the heart… the intimate connection between seeing and feeling…” My kind of stories.

City of God by E. L. Doctorow — Some years ago, The New York Times called the film adaptations of Doctorow’s works ‘expensive failures’. Reason: his novels are ‘too cerebral’, ‘too lyrical’, ‘too writerly’ to be transposed into cinematic images. Got it. Whenever I’ve the time and in the mood for some cerebral challenges, I know what book to pick up. After all, I’ve long wanted to read Doctorow. The subject matter of City of God just may arouse interest to help me through the thickets of Biblical proportion.

Becoming George Sand by Rosalind Brackenbury — George Sand I’ve heard of, Frédéric Chopin’s lover, one of those female writers who had to adopt a male pseudonym in 19th C. society. The interesting part is the modern parallel of the story of a female French professor in Edinburgh. Author Brackenbury (due to my ignorance I’ve not heard of) graduated from Cambridge University (which I’ve heard of) and now Fellow of Creative Writing at the College of William and Mary (that good name I’ve also heard of) in Williamsburg, VA. Enticing enough. 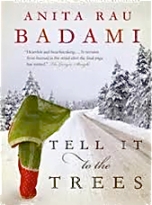 The Hero’s Walk and Tell It To The Trees by Anita Rau Badami — A look at the book cover of Tell It to the Trees helps me get the idea… The Indian diaspora in cold, wintry Canada, and for that I find a linkage. Not that I’m from India, but close enough. I’m sure Anita Rau Badami has a lot more to tell than adjusting to the climate. Born in India, now living in Montreal, Rau Badami has in recent years emerged as a clear voice in Canada’s literary landscape.

Movie Love: Complete Reviews 1988-1991 by Pauline Kael — Roger Ebert in his memoir Life Itself acknowledged Pauline Kael (1919-2001) as his mentor and major influence. While Ebert got a Pulitzer for his movie criticism, Kael got a National Book Award. She had been praised for re-inventing the form and aesthetics of the genre of film critiques. Along with a dearth of female literary voices in film criticism like Susan Sontag (1933-2004), seems like such a species had become extinct nowadays. All the more to appreciate ‘a classic’.

I’m a keeper of lists. If you’re interested, here are my loots from previous years: