This captivating documentary is the second installment of the ‘Exhibition: Great Art On Screen’ series with host Tim Marlow. An ‘event film’, the term refers to this kind of doc focusing on a special occasion, here, the 150th year of the renowned Norwegian expressionist Edvard Munch’s birthday (1863-1944). To celebrate, a comprehensive exhibition of Munch’s works is being held in two venues in Oslo from June to October, 2013, the National Museum and the Munch Museum. The film captures the highlights of this exhibition.

I soon learned too that the theatre charged more for the experience. However, the $17 ticket is acceptable. Short of seeing the actual paintings at the two venues and being free to walk around, I’ve saved a hefty plane ticket to Oslo, and I get to see the works magnified clearly on the big screen and hear expert commentary so I can appreciate even the minute brushstrokes up close. Sure, I can always wear a headphone, if it’s available, to hear the commentary while walking through the exhibition. But it’s a refreshing experience to look at the paintings enlarged on a giant screen, hearing in-depth analysis juxtaposed with dramatized biopic vignettes as I sit back and eat popcorn in a dark, air-conditioned theatre on a hot summer day.

The film Munch 150 has aptly taken advantage of the medium of the cinema. Unlike the previous film in this series, Manet: Portraying Life, which ironically, is devoid of life, Munch 150 has presented to the viewer what such a medium can best do. The camera as a guide and magnifying glass, projecting onto the big screen images larger than life, accompanied by insights from curators and host Tim Marlow, an audio-visual experience. Yes, I’ve mentioned ‘big screen’ several times. That is essentially the benefit that the TV screen or your computer monitor would not suffice.

Edvard Munch (Norwegian pronunciation: [ˈmuŋk], in English, something like ‘Moonk’ with a glottal sound on the ‘n’) was born in 1863 in a small Norwegian village. His family moved to Kristiania (now Oslo) the next year. From an early age, Munch was haunted by death and illness. He first saw his mother die of tuberculosis when he was five, and later, his beloved older sister Sophie tormented and died of the same illness when he was fourteen. He himself was plagued by frequent sickness, and at one time was near death with tuberculosis. Physically struggling with poor health, inwardly, Munch was often stricken by desires and guilt. Nihilistic thoughts added burning fuel to an already troubled soul. These all led to alcoholism, depression and breakdown later in life.

Writing and painting became his outlets. Journals allowed him to spill his thoughts, and the canvas was the visceral medium for him to release deep, psychological turmoils. His fears and anguish, all angst and pains found expression in his art.

I was particularly impressed by his early work The Sick Child (1885-86), depicting the trauma he had experienced as he watched his beloved, ailing sister Sophie lay in bed frail with tuberculosis. A grieving woman holding her hand, head bowed in sorrow. It was a disturbing scene, and yet I’d appreciated the colours and brushstrokes that seemed as if they were just rendered in a free and haphazard way. From the commentary, I felt the poignancy.

The camera and commentator guided me to see the scratches left on the canvas, most noticeably on the pillow near Sophie’s face, something which I wouldn’t have noticed if I just walked by it in the museum. These scratches were troubling to look at, probably made by a pallette knife, or a hard brush. They were marks of anguish and frustration, the outburst of emotions during what must have been a painful process. Munch always left ‘blemishes’ on his paintings. Here, the scratches and patchy layers of paints on paints showed raw emotions unleashed. That was the reason the work was met with criticisms and rejections in his day. It was not pretty and neat as his predecessors had done. He was, literally, painting outside the lines.

The Frieze of Life

Many of Munch’s more well known works are in the series called The Frieze of Life—A Poem about Life, Love and Death. The Munch Museum in Oslo exhibits the paintings as a series on four white walls in a room — and here’s the unconventional — without frames. The curator commented that this was what Munch would have intended. Without the distractions of the frames, the paintings speak out loud and clear. In The Frieze of Life, Munch explored the very essence of being human, the frameless, existential experience that is universal.

The Scream is in the section of The Frieze of Life categorized as ‘Angst’. It is the most well-known of Munch’s paintings. A deathlike skull-face devoid of gender, hands covering the ears and screaming out into the void. Munch painted this after an actual experience while he was walking in the woods, hearing a huge scream inside him. He was overcome with fear. After that episode, he painted The Scream. In it is a figure that has since become the epitome of existential angst. I’d appreciated the comment in the film stating that ‘it’s an icon, not a cliché.’

The Scream made history just last May. It had set an auction record for a piece of art work, fetching $119.9 million (£74m) at Sotheby’s in New York. Almost seventy years after his death, Munch’s works still scream. 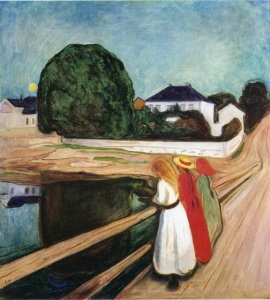 A more delightful painting, The Girls on the Bridge is fresh, bright, and colourful, exuding a summer spirit. But even in this work, Munch depicted the struggles between innocence (white dress) and desire (red). And while we see the green clump of a tree, full of life, we also see its ominous, dark reflection on the water. In the midst of life, we are in death. Munch seemed like a party pooper, but maybe that’s why he needed to scream. Or else we wouldn’t have heard him.

The next and last installment in the series is Vermeer and Music.

Arles: In the Steps of Van Gogh

Edward Hopper, William Safire: The Visual and the Word