What can a little bear from ‘Darkest Peru’ do to ease one’s tension, uplift a depressed mood, or simply elicit laughs out loud? Plenty. Paddington can do plenty of good for all of the above. I’d chosen the right film to come out of a stressful month.

Clever, fast-paced, passionate, and very funny, Paddington the movie is 95 minutes of pure delight. Although Michael Bond’s stories first came out in 1958, director and screenwriter Paul King has brought out some relevant, contemporary issues in his adaptation such as migrating to a new land, finding a home, striving to belong, accepting diversity, and basically the universal search for ways we can all live together despite differences. 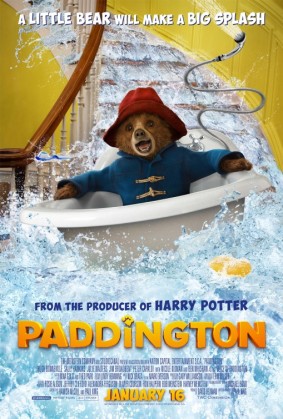 The movie begins with a black-and-white old news reel. I like that already. An English explorer, Montgomery Clyde (Time Downie), heads over to ‘Darkest Peru’ and discovers a talking bear family. As he leaves, he urges them to visit London. After an earthquake that killed his Uncle Pastuzo (Michael Gambon, voice), the little bear (charmingly voiced by Ben Whishaw) is sent out by Aunt Lucy (voice of Imelda Staunton) to head for a new life in this believed-to-be-friendly London. To send him off, Aunt Lucy hangs a little sign with a string around his neck that says: “Please look after this bear. Thank you.”

And so the little stowaway with a suitcase full of marmalade hides on board a cargo ship and is transported to a foreign land where the Brown family finds him at Paddington Station. Thus his new name.

Despite the chaos that ensues in the Brown household, and the initial reluctance of Mr. Brown (Hugh Bonneville, who is like a Papa bear himself), and daughter Judy (Madeleine Harris, “So embarrassing!”), Paddington’s inept charm readily wins the heart of the enthusiastic Mrs. Brown (the always enthusiastic Sally Hawkins) and very friendly young son Jonathan (Samuel Joslin). Later, Paddington finally gains even the public’s favour with his serendipitous heroism on the streets of London.

Here is no place to argue against stock characters. Of course we need a villain; we have the parallel of Cruella De Vil of 101 Dalmatians in the form of Millicent, played by Nicole Kidman. I’m sure she enjoys doing that too. Driving a van that says Taxi when the sliding door is opened, she soon reveals herself a taxidermist when the door is closed. Good to see stars letting loose in non-typecast roles. Julie Walters and Jim Broadbent also present for you to discover. And if you know what the Paddington Bear author Michael Bond looks like, you can find him in cameo too.

Very well integrated are the effects of real-life, human actors interfacing with the animated bear and other cartoonish scenarios. Do we need to know how the technical genius behind the screen worked, how they used around 600 shots with bears, which required 350 people across two countries working on the visual effects for three years… to enjoy the film? Definitely not, maybe best we don’t go into the complexities of CGI’s, simulations, and yes, how to deal with fur. The final results are all what the technical team had striven for, delivering what they would like us to see. I can fully appreciate the effects. Kudos to them all.

It is definitely a snub Paddington doesn’t get an Oscar nomination, in any category. While in the land of its origin (England, not Peru), Paddington is nominated for two 2015 BAFTA Awards (The ‘British Oscars’): Best Adapted Screenplay and Best British Film. So I do hope the box office here can redeem the slight on this side of the Atlantic. Go see how the little bear and his new-found family can dispel your winter blues. Noms or no noms, this is a winner in my book.

As for that sign Aunt Lucy hangs around Paddington’s neck, we may need to heed it even more in this conflict-ridden world of ours:

“Please look after this bear. Thank you.”

Click on the link to the fascinating article in The Telegraph, Paddington: The technology behind the small bear from Darkest Peru.

21 thoughts on “Paddington: The Marmalade to Spread on Your Day”