Director John Crowley’s movie adaptation of Brooklyn by Colm Tóibín has aptly answered my query (last post): what elements in the book make movie materials? Potentially, a lot. The trick is not to turn them into cliché moments on screen, for this isn’t an unusual story: a young woman leaving home and finding independence and love in a new land. While the film has its flaws, Crowley has crafted a beautiful and stylish transposition.

Here in Brooklyn, Hornby tells his story by linking up succinct scenes that just about cover all key episodes in the book. They are short, to the point, and well-paced. The editing too is seamless, driving the film on without delay. After all, they only have about 120 minutes, and they’ve done a smooth job doing that. 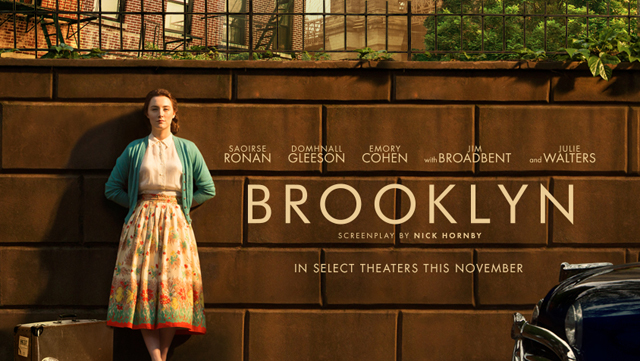 Tóibín’s seemingly simple narration of young Eilis Lacey’s journey of emigration from Ireland to America in the 1950’s is transposed onto film with sensitivity and nuance. The ‘mundaneness’ of daily living – working in a department store, dinner back at the boarding house, night class several days in the week – is transformed into vivid scenes by a lively cast of actors. To their credits, the already animated dinner table banters at Mrs. Kehoe’s (Julie Walters) rooming house as described by Tóibín have now come to life. Indeed, Julie Walters embodies Mrs. Kehoe, and Jim Broadbent as Father Flood is well cast.

Crowley, or is it Hornby, had softened Tóibín’s shrewd descriptions of some of his characters, presenting them in a sympathetic light, making them more likeable. The mood is less serious than the book but evoking empathy just the same. Although two weak spots I find. First is the glamorous and confident older sister Rose (Fiona Glascott) is not depicted as such, lessening the effect that is to come later. Secondly, Jim Farrell (Domhnall Gleeson) is absent at the beginning but appears only in the last part of the film, hence there is not much for character contrast or development.

While most of the supporting characters are well played, the film belongs to Saoirse Ronan, the young Irish actor who first drew notice from Joe Wright’s adaptation of Ian McEwan’s Atonement (2007). Her performance as 13 year-old Briony sent chills up my spine. With that role Ronan became one of the youngest Academy Awards nominees. In the most recent Wes Anderson’s The Grand Budapest Hotel (2014) she sends out very different vibes. As of now for Brooklyn, Ronan has a Golden Globe Best Actress nom. I anticipate she will go all the way to the Oscars.

Cinematographer Yves Bélanger is apt to let the camera linger on Ronan close-up many times, for she acts without speaking. Her facial expressions representing the spectrum of Eilis’s emotions and thoughts are spot on. It is a delight to watch her.

Another animated scene is dinner at Tony’s (Emory Cohen) Italian family home. Here, we see the characters jump out of the book, especially the kid brother, 8 year-old Frankie (James DiGiacomo), whose infamous line is “We don’t like Irish people.” But of course, the whole family welcomes Eilis and supports Tony, who has interpreted his literary version well: respectful, authentic and transparent, as Tóibín writes,”he was as he appeared to her; there was no other side to him.”

Domhnall Gleeson as Jim Farrell has a hard role to play for its very short appearance in the last part. He has not much material to work from but just hangs around with Nancy (Eileen O’Higgins) and George (Peter Campion) who try to set him up with Eilis. Not much to launch a lightning courtship.

Colours play a major role in the film, albeit I feel a pinch of contrivance; watching the colourful 1950’s costumes is like looking into the window of a candy shop with all kinds of macaroons. However, the colours may well set the mood and setting for the film: The overall greenish tone of the first part in Ireland, to the stark green coat Eilis wears as she leaves home on board the ocean liner to the cheery bright yellow cardigan after she has met Tony. Towards the last part, it’s back to the greenish hue of Enniscorthy, only the newly returned Irish/American gal wearing her bright colours. Too explicit a visual translation? Maybe, but I like macaroons, and I won’t hold a Ripple against the colour treatment.

Another visual imagery is at the beginning, right after Eilis has landed in America and gone past the immigration line, she opens the door to head out. We see her step out into an overwhelming brightness of white. Too heavenly? Or maybe just the right sign to boost the confidence of our seasick and insecure heroine?

How do you translate Tóibín’s quiet descriptions on screen? His signature depictions of a calm surface that hides tumultuous billows of emotions? Crowley gives us silence. Indeed, there are cinematic moments that are devoid of sound; the most memorable one is close to the ending when Eilis reveals her secret to her mother (Jane Brennan), sending shock waves and despondence on her face. Yet she restrained her emotions. Mother and daughter embrace in utter silence with tears flowing, saying possibly a last goodbye to each other in their lives and releasing a determined letting go for both.

Brooklyn is a beautiful adaptation worthy of its literary source, among one of the best films I’ve seen in 2015.

11 thoughts on “Brooklyn: From Book to Film”