For the past seven years, I’ve a special post at Christmas which I’d named Reading the Season, just to help me dwell on the Reason behind all the festivities. Some past authors I’d read include Marilynne Robinson, C. S. Lewis, Madeleine L’Engle, Luci Shaw. This year I’m going back to the source material, The Bible, for my Christmas read. And no, my selection isn’t from Luke 2, which Linus so eloquently delivers every year in the delightful A Charlie Brown Christmas.

I reread the little love story in The Book of Ruth, one of the earliest parallels pointing to the Christmas story. This time I found it particularly relevant. So here it goes…

A long time ago in a land far, far away a man named Elimelech and his wife Naomi, together with their two sons Mahlon and Chilion, had to pack up and leave their hometown of Bethlehem in Judah to escape from a famine in the land. As migrants, they travelled to a foreign country called Moab.

Alas, Elimelech died soon after and left behind Naomi and their two sons. Years passed, the sons married two Moabite gals, Orpah and Ruth. Could it be the food there, for not long after Naomi’s two sons also died. Bitter and despondent, Naomi sent her two daughters-in-law back to their own family and began her lone journey to return to Bethlehem.

But Ruth was adamant to follow Naomi back to where she came from with this moving vow:

Don’t urge me to leave you or to turn back from you. Where you go I will go, and where you stay I will stay. Your people will be my people and your God my God.

Touched by her loyalty, Naomi let Ruth travel with her back to Bethlehem. She was like a migrant all over again. To the people there Naomi, if anyone still recognized her, was now widowed, sonless, bitter and destitute. The two women didn’t even have a refugee camp to take shelter.

To survive, Ruth went out to the fields to glean the grains left by the harvesters. It happened that they were in the fields of a kind landowner Boaz, who after noticing Ruth and hearing of her love for her mother-in-law, told his workers to leave more grains in the fields for her to glean. Yes, it just happened that she’d come to the right field.

When Naomi learned of Boaz, she saw a glimpse of hope. Definitely this was more than the food bank; this generous landowner actually was a relative belonging to her late husband’s clan. Out of desperation, she sent Ruth on a risky mission: to go to Boaz at night and approach him tactfully, letting him know of their ties in kinship.

Lo and behold, Boaz, an honourable and compassionate man, was harbouring a deep and ardent love for Ruth. That night, though surprised to see Ruth, he received her readily and with respect, restraining and keeping his torrid passion well under wraps, umm like… Mr. Darcy.

According to the law of the land, the closest relative had the first right to redeem the lands that Naomi’s late husband Elimelech had sold and to marry Ruth to carry on the family line. But lo, Boaz wasn’t that person; instead, he did the honourable thing, extending the first right of redemption to the closest relative, yes, like umm… Mr. Collins.

And it happened that Mr. Collins was willing to buy back the land but wait a minute, he couldn’t take Ruth as a wife. There could be reverberations, for Ruth was a foreigner, a Moabite. Further, the land was for her to continue with Naomi’s family ownership, and would not be under his name. “I pass,” he said in the sight of ten elder witnesses. Phew!

So only then did Boaz declare not only his willingness to redeem the land once owned by Elimelech, but also his desire to take Ruth as his wife to save her from destitute, poverty, and childlessness. How marvellous it was that Boaz, a legit kinsman redeemer according to the laws, was also truly, madly, and deeply in love with his redeemed.

And we are definitely indebted to the two lovers for producing the line of descendants, for Ruth later became the great grandmother of David, from whose ancestral line generations later came Jesus.

With this beautiful ending I come back to Christmas 2015, and ponder on the lowly birth of Christ at the manger, to become our Kinsman for the ultimate purpose as Redeemer. 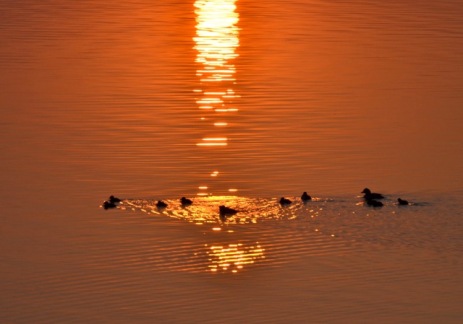 The Risk of Birth

This is no time for a child to be born,
With the earth betrayed by war & hate
And a comet slashing the sky to warn
That time runs out & the sun burns late.
That was no time for a child to be born,
In a land in the crushing grip of Rome;
Honour & truth were trampled by scorn–
Yet here did the Saviour make his home.
When is the time for love to be born?
The inn is full on the planet earth,
And by a comet the sky is torn–
Yet Love still takes the risk of birth.

2011: Walking on Water by Madeleine L’Engle

2008: The Bible and the New York Times by Fleming Rutledge

16 thoughts on “Reading the Season: The Book of Ruth”