What will we do without Downton in 2017? Will our biological clock even recognize it’s a new year?

But at the moment, let’s just celebrate this monumental achievement for one last time. If Sunday’s Episode 1 of this last Season signifies anything, it’s: tis the Season to be jolly.

This intro Episode has well prepared us for some neatly resolved, long due conclusions, and rightly so. For how can we live with an unsettled ending for any of its characters? They all deserve a good life, don’t they, including Mr. Barrow, the in-house villain? Well yes, but maybe not for a thief and blackmailer like Ms. Bevan.

Thanks to Ms. Bevan though, Mary’s secret is finally made known to Robert. Charlie Sheen had thought of it first: if the secret is out, no one can blackmail you anymore. Simple. But of course, Mary has her point. Tony Gilliangham is just not good enough for her. And the best line of the Episode belongs to our inimitable heroine:

“I’d rather be alone than with the wrong man.”

With that line, Robert knows his daughter can run the kingdom, let alone Downton Abbey.

Talking about good lines, looks like our scribe Julian Fellowes wants to leave us with more indelible ones just as parting mementos.

With this episode, we finally see that Mrs. Patmore has talents other than the culinary. Why, acting as a go-between to sort out marriage expectations sounds as nasty a mission as Ethan Hunt of the Impossible Missions Force would choose to accept. Well, what are friends for. And we applaud her (ugh… awkward) effort.

Yes, Mr. Carson will take Mrs. Hughes, wrinkles, warts and all, with the lights turned off or on. A gratifying, redeeming scenario in an alternate universe far from Ishiguro’s The Remains of the Days. 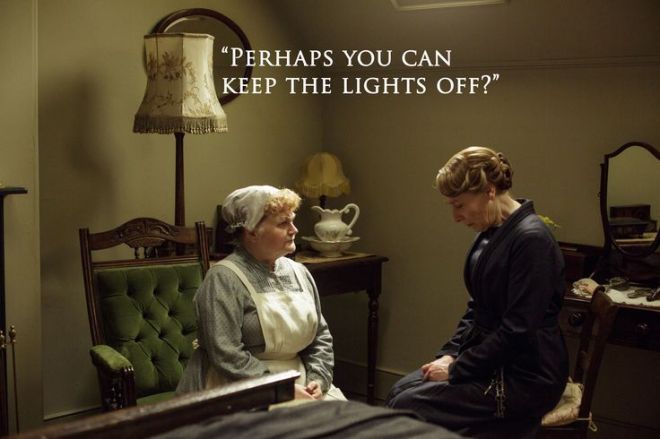 And at long last, Mr. and Mrs. Bates are proven to be innocent of any and all crimes. Mr. Green apparently had more enemies than anyone would have thought. But while the Bates escape the miscarriage of the law, will Anna be safe from the literal, biological kind? Of course we all wish them well in giving Downton some more little ones, upstairs or down, since little Sybil will move to America with her Daddy and Marigold to London with her Mommy, and especially when they have an in-house piggy backer with Mr. Barrow.

Speaking of moving away from the aristocratic nest, I’m glad to see Edith find a place in London that she can be both a mother and a career woman. Although she soon finds being a woman boss is more challenging. But I’m sure she won’t be complaining much as she enjoys the benefits of mixing with the Bloomsbury group and meeting Virginia Woolf.

“I feel I have been given one little bit of happiness and that will have to do,” Edith’s line of self-sufficiency, one that can match her indomitable sister’s willingness to be alone than with the wrong man.

Looks like Downton embracing modernity is the theme this Season and I’m sure Daisy will one day make one devoted and effective Suffragette. Too bad the film has been made or else she’d be one fine comrade fighting shoulder-to-shoulder with Carey Mulligan.

Embracing or being enveloped by modernity, Isobel and Violet represent the two camps, the ready and the reluctant. Again, here sparks fly regarding the control of the village hospital. Violet will hold on to her principle, in whatever aspects of life: “Sometimes it’s good to rule by fear.” While Isobel does not flinch, it’s definitely effective for her servants, especially Miss Denker.

Last but not least, Robert brings Cora down to the kitchen, takes cold chicken out from the refrigerator all by himself, and eats a drumstick with his fingers? Do we need any more obvious signs of embracing modernity?

I trust Season 6 will be a delicious treat.

What are your favourite scenes?