Five years ago, I took a New England road trip with my cousin. It was a major endeavour for me coming from Western Canada, over 2,500 miles away. The photos here were taken during the road trip that fall. We began our drive across three States starting from Wayland, MA. Nearby Concord was our first point of interest. This is where Louisa May Alcott grew up and later transposed her real life family onto the page to write Little Women.

Thanks to writer/director Greta Gerwig’s adaptation, fond memories flash back as I watch the New England scenery captured so beautifully on screen. One of the memorable scenes is the panoramic autumn hillside in which Laurie made his failed attempt proposing to Jo. Another one was the Christmas morning breakfast give-away as Marmee led the girls to exercise love-in-action.

A major attraction in Concord is Orchard House where Louisa May Alcott wrote Little Women. The Alcott family owned Orchard House from 1857 to 1884, within which period all four Alcott girls Anna, Louisa, Lizzie and May had their most influential growing up years. The house is now a museum:

The rooms and furniture, Louisa’s (Jo) writing desk, the costume and props the girls made for their plays, Anna’s (Meg) wedding gown, and all of May’s (Amy) original paintings on the walls of her room are preserved inside the Orchard House Museum:

Louisa transposed her family onto the page, creating parallel characters in the March household. In the Little Women Garden, the March sisters had their own flower bed, each planted their section according to their taste or maybe, character. Here’s from the quote on the sign indicating their choices:

Meg – roses and heliotrope, myrtle, and a little orange tree
Jo – never alike two seasons, for she was always trying experiments
Beth – old-fashioned fragrant flowers, sweet peas and mignonette, larkspur, pinks, pansies, southernwood, with chickweed for birds and catnip for the pussies.
Amy – honeysuckle and morning-glories hanging their colored horns and bells in graceful wreaths all over it, tall white lilies, delicate ferns, and as many brilliant, picturesque plants.

Here’s the issue many have questioned: Did Greta Gerwig alter the Little Women characters to appeal to modern day viewers, or, is she merely revealing Louisa May Alcott’s true image?

From Orchard House we went to visit the Concord Museum. Among plaques presenting some of Concord’s famous residents is this one of Louisa May Alcott. The quote on there comes from a letter Louisa wrote dated November 29, 1856:

I think I shall come out right, and prove that though an Alcott I can support myself. I like the independent feeling, and though not an easy life, it is a free one, and I enjoy it. I can’t do much with my hands; so I will make a battering-ram of my head and make a way through this rough-and-tumble world…

The Alcott parents, Bronson and Abigail were abolitionists and environmentalists. Bronson was the first teacher in Boston to admit a black student to his class despite protests from white parents who threatened either the black student go or they go. Bronson’s school was left with very few students consequently as he insisted his stance.

But his educational ideals must have been embraced by students as Bronson introduced the idea of raising their hands to speak in class, and he was the one who invented recess in school. There you go for a Jeopardy question.

Louisa’s mother Abigail was one of the first social workers in Boston, and was active in Women’s rights. She’d said, “I will go to the polls before I die if my daughters had to carry me there.”

The Alcott’s close friends and neighbours included prominent intellectuals and writers of the day: Emerson, Thoreau, Hawthorne. They made frequent, mutual visits, and had personal influence on Louisa’s formation and writing.

Down the road from the Alcott’s was Emerson’s home. Emerson had helped the financially strapped Bronson with acquiring Orchard House:

And living minimally by choice as an experiment, here’s Thoreau’s cabin (replica) at nearby Walden Pond: 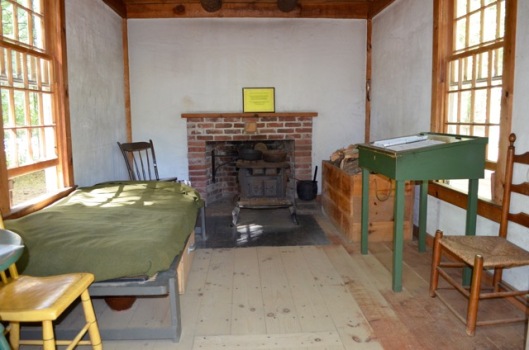 Growing up under such stimulating milieu where thinkers and writers are free to explore new ideas and generate new philosophy, it was only natural that Louisa grew up grasping the values and the spirit of her parents and their friends, becoming a non-conformist herself.

Louisa had admitted she’s Jo in Little Women and added: “I didn’t make her half-bad enough.” If she’d been here today and directed the movie, I’ve a feeling she’d make Jo twice as radical and assertive. Gerwig is admirably restrained and for this, kudos to her.

Can a movie adaptation ever be as good as the book?