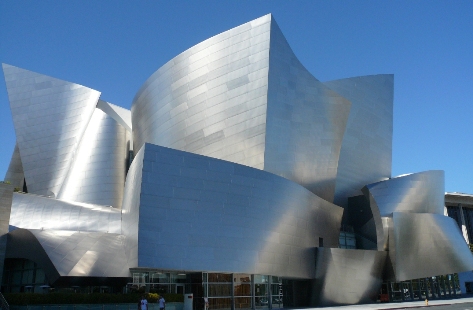 “You can look anywhere and find inspiration.”

The past couple of months I’ve been tied down with previewing films for an upcoming International Film Festival that I haven’t time to watch films of my own choosing.  The past weekend I decided to cease the dry spell and watched the DVD I’ve purchased for a long while but haven’t the chance to view.  My only regret: Why did I wait so long?

This is a documentary about and made by two of my favorite artists:  Architect Frank Gehry and film director Sydney Pollack (Best Director 1985, Out of Africa), whom I sadly miss upon his untimely passing on May 26.  (To read my tribute to Sydney Pollack, click here.) Pollack worked on this film, his first documentary, over weekends
for about five years.  An official selection at the 2006 Cannes Film Festival, Sketches of Frank Gehry is his last directorial work.

Pollack has taken a simple and casual approach to present his long time friend Frank Gehry to the viewer, and that’s what impresses me.  The low-key yet artistic design of the film is a modest portrait of the architect whose body of work is often associated with rule-defying, bold and striking structures around the world.

Born 1929 in Toronto, Canada, Gehry moved to the United States with his family in 1947. His career spans four decades, establishing himself with renowned projects such as the Guggenheim Museum, Bilbao, Spain (1997), the Vitra Design Museum, Germany (1989), and more recently the Walt Disney Concert Hall, L.A. (2004). The personal and unpretentious portrayal of the architect brings out the mild and human side behind these massive physical structures.

Through informal dialogues, the filmmaker effectively captured the essence of artistic pursuit: the self-doubt during the creative process, the incubation and collaboration of ideas, the uncertainty of the soundness and appeal, and the ultimate exhilaration of the successful completion and reception of the work. Interestingly, the film works like a double-edged sword.  It explores the creative process of both the subject and the filmmaker.  And it is such revelation that makes the documentary so appealing.

In the beginning was the void:

Frank:  You know it is… I’m always scared that I’m not gonna know what to do.  It’s a terrifying moment.  And then when I start, I’m always amazed, “Oh, that wasn’t so bad.”

The veteran director had his uncertainties as well:

“That’s why you’re perfect,” he said.

Maybe all our training and experience that we hang on to so dearly are impediments to a fresh, new perspective.

The film gives us the insider view of the Gehry creative process.  It is a collaborative effort involving inputs from design partners mulling over paper models and computer expertise transferring concepts to 3D digital mode. Despite the elaborate and sometimes long incubation period, every piece of work begins with the architect’s own signature squiggles on a blank piece of paper.

We see Pollack using a hand-held digital camera to capture more agile and personal shots. As the title suggests, the filmmaker interviewed and chatted with various artists, architects, critic, and even Gehry’s therapist to gain different perspectives into the heart and mind of the architect.  He was able to elicit some insightful comments.

Writer and curator Mildred Friedman has this to say about Gehry:

He’s an architect who’s also an artist.  He takes so many risks.  And that’s what artists do.  Artists take risks to do something new that no one has seen before.

A great many people come to me hoping they can change themselves, settle their anxieties, their problems, their marriage or whatever…  When an artist comes to me, he wants to know how to change the world.

And from Pollack, when talking about the epic and mythical Guggenheim Museum, Bilbao, Spain:

He sees that the whole reason for being an artist is that moment in somebody’s eyes when you reach him.

The nay-sayer is represented by Hal Foster, Professor of Art and Archaeology, Princeton University, who criticizes Gehry of making a spectacle of his work.  We also see montage of printed words from the media, such as “ugly”, and even “perverse”.

Responding to criticisms about Gehry’s galleries and museums competing with the very exhibits they showcase, Julian Schnabel, artist and filmmaker (The Diving Bell and the Butterfly, 2007), defends Gehry’s design with this audacious sum up:

I feel very comfortable in his spaces.  He understands scale.  And if it does compete with the art, maybe that art isn’t good enough.

Such thought-provoking comments are just some ideas one can mull over long after the film.

I must also mention the original score composed by Sorman and Nystrom.  Like a soothing balm, it is pure delight looking at Gehry’s fluid designs with the equally flowing and meditative musical rendering.

The special features on the DVD include a bonus 35 minutes interview and audience Q & A with Sydney Pollack at the L. A. Premiere of the film.  The icing on the cake, this feature offers Pollack’s reminiscence of the production and more thoughts on the creative process.  A valuable DVD to keep for anyone interested in the artistic expression of the human mind.

A note on the photos:  Arti has the pleasure of visiting two of Frank Gehry’s work.  The above photos are taken by Arti in October 2007 and February, 2008. The first two are the Walt Disney Concert Hall in L.A.  The last two are different views of The Peter B. Lewis Building at Case Western Reserve University in Cleveland, Ohio.  All Rights Reserved.

The source for the squiggles image:  Maclean’s Magazine.