“There is a great deal of unmapped country within us which would have to be taken into account in an explanation of our gusts and storms.”  ––  George Eliot 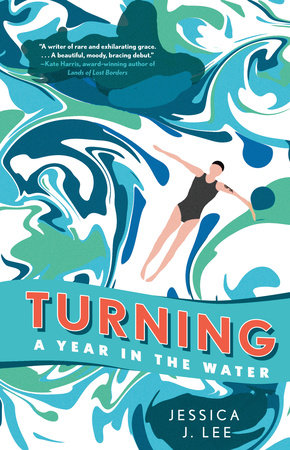 The above quote comes to me as I read Jessica J. Lee’s memoir Turning: A Year in the Water. From the beginning, I’ve an inkling that what she intends to say isn’t just about swimming but something deeper. I’m not disappointed. Swimming in fifty-two lakes throughout one year in Brandenburg in itself is a fascinating idea. What more, I’m much gratified with the candid revealing of her interior journey as she describes the physical terrain she treads. Often, the two mirror one another.

At twenty-eight, Lee goes to Berlin from Canada to do research and complete her doctoral dissertation on environmental history. She brings with her trunks of emotional baggage of hurts and loss from broken relationships and a transient existence,  traversing between Toronto, London, and Berlin.

Born in Canada to a Chinese mother from Taiwan and a father from Wales, Lee has been straddling multiple worlds all her life, first learning Mandarin at home, then English, then French in school. The multiplicity of languages reflects the challenges of growing up bicultural. The divorce of her parents further shakes up the fragile psyche of a teenage girl’s search for a sense of self. As a young adult she looks to other relationships and experiences to find anchor but only reaps disappointments. A move to London, England, later leads to deeper personal loss. By the time she arrives in Berlin, accrued pains and hurts have left indelible marks in her life.

To find strength and healing in a new land where she has to learn yet another language and culture, Lee decides on a venture to come to terms with her predicament. Her plan is to swim in fifty-two lakes near Berlin in the Brandenburg vicinity through every season of one year.

In short chapters under each of the four seasons, Lee captures succinctly her experience carrying out this plan, interspersing a swimming log with the back stories of her life.

Perhaps it was a drastic response. In depression, I had become someone I hadn’t wanted to be, emptied and hardened. I felt that I had to respond to it in kind, as if lake water might blast away my sadness and fear. So, I decided to swim for a year, in the hope of finding some reserve of joy and courage in myself. (6)

This unique resolve of hers fascinates me. Lee’s memoir is a log of a brave yet quiet venture through the seasons. Not only that, she has introduced me to the natural beauty of the Brandenburg landscape and the travelogues of the German writer Theodor Fontane (1819 – 1898). I read with interest the German socio-political situations she shares, also lap up tidbits on the environmental history of lakes, glaciers, and the etymology of terms associated with her experience.

Limnology is the study of lakes. Originally from Greek, but with the German overtone of Schwelle, it refers to an in-between space, an apt metaphor for Lee’s liminal identity between cultures.

Fragments of Chinese slipping out between English and German, as I press new words and places into place. Return. Home is as much in a language as it is in a landscape. (9-10)

In the stillness of the lakes, the border between nature and culture is thinned. Swimming takes place at the border, as if constantly searching for home. (14)

The term ‘Turning’ refers to the movements of the water in a lake. In lakes, there’s stratification of water and overturn, with the different layers of water in constant vertical movement. This action creates ‘cycles that keep the lake alive, ever-changing, breathing oxygen into every part of the lake.’ Isn’t that, too, a beautiful metaphor for our very existence, the essence of life?

Lee’s metaphors are fresh and relevant, akin to her academic field of environmental history. Here are two other ones I’ll remember for a long while. Lakes are markers in time in the glacial retreat:

In Lakes the present history of our world contracts and intensifies, urgent and shrinking like the ice… I take my parents’ divorce to be a marker, a line drawn between childhood and adulthood… For a girl on the cusp of teenhood, there was never going to be a good time. (56)

And this one is another apt description of so many being called diaspora: Glacial Erratics. The word erratics has the Latin root errare meaning to wander, to roam, to be mistaken, to go astray.

Erratics carry their origins with them, telling the story of where a glacier has been and how the ice deposited the erratic in the landscape. An erratic is a rock that doesn’t belong to the geology in which it is planted; instead, it’s a record of another place… Like an erratic, I was carrying past places with me. I felt mistaken. (170)

Above all, I’m mesmerized by a determined mind and body as I read how she adheres to her personally-set rules: no cars, no wetsuits. She bikes to her destinations, carries her bike on public transit when needed, most of the time pedalling for hours. She prepares a light lunch and a change of clothes in her backpack and sets off in the morning, sometimes with a friend, but mostly alone.

Every lake has its own features, the water has its own feel, the sensation swimming there can be different from another, but it doesn’t stray far from calming and revitalizing. In winter, she brings a hammer from home to break the ice on the lake surface before slipping into the frigid water. There’s numbness and pain, surely, but she has developed the courage and the tenacity to face the dark mass and not withdraw.

In solitude, she finds strength; in conquering her fears, freedom. The ghosts of the past might still be there, but she has learned to face them.

Simple yet poetic, honest and mindful. Reading Turning is like dipping slowly into the lake of empathy, gradually getting attuned to the chill to find the water soothing. And you’d want to stay there just a while longer.

My thanks to Catapult.co for providing me a pdf version.

10 thoughts on “Turning: A Year in the Water by Jessica J. Lee, Book Review”