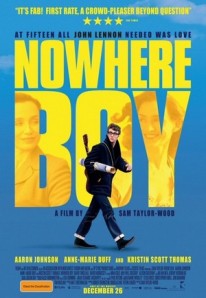 Other than the iconic first chord of ‘A Hard Day’s Night’ at the beginning of the movie, there is no mention of The Beatles in Nowhere Boy, which is fitting.  After all, the film is not about the Beatles, but a teenaged boy by the name of John Lennon growing up aimless and angry, and how he found passion and poured his life into a goal that finally led him to become one of the most important music figures of our time.

An apt title.  Lennon had had a tumultous childhood.  Raised by his aunt Mimi since five years-old, he did not meet his birth mother again, Mimi’s younger sister Julia, until he was 15.  The film picked up from there until he went to Hamburg in 1960.  Screenwriter Matt Greenhaigh had crafted a moving relational story based on the book written by John Lennon’s half-sister, Julia Baird, entitled Imagine This: Growing Up with My Brother John Lennon.

I’ve particularly enjoyed the mother-son relationship depicted so poignantly in the movie, and the tug of war between the one who has given birth to and the one who has raised the child.  For me, there is also a bit of competition, comparing the two amazing actors, Anne Marie Duff as Julia, Lennon’s birth mother, and Kristin Scott Thomas, as Aunt Mimi, who has raised the boy, stayed with him through thick and thin, and watched him emerge into a man of importance.

Everyone who watches a movie does so from his/her own frame of reference and perspective. While I’ve enjoyed the pre-Beatles era music and the early rock and roll in the film, as well as the human interest of youth striving to gain some sense of self, I’m nevertheless drawn to Scott Thomas’s role as Aunt Mimi.  She has shown what a mother is, even though she is not the one who has given birth to John.  She is someone who stays and not escapes, who takes care of daily tedium, who instills the ever unpopular notions of discipline and responsibility, and who takes nasty insults and hurting actions from a rebellious and still maturing teenager, all because of love.  Scott Thomas’s marvellous performance as the strict and stern Mimi is an effective foil against Duff’s frolicking Julia.  Both performances are moving.

Aaron Johnson has done a marvellous job in portraying a tormented soul torn between these two women. Meeting his birth mother Julia at 15, he can feel right away the thickness of blood.  On the outset, his musical talent has come from Julia, and his free spirit a natural extension of hers, yet he knows he is also tied to Mimi, and despite her restrained persona, he knows she has loved him deeply.

On his first gig as the Quarrymen, John is introduced to a fifteen year-old well-mannered teen by the name of Paul McCartney, nicely played by Thomas Brodie Sangster. Again, an effective foil between the two.  Paul is gentle, polite, chooses tea over beer, and does not have to bust and bang to release his pent-up emotions.  He also helps John with his guitar skills, teaching him more chords, and suggesting they write their own songs.  Paul definitely has it all collected under a stronger self despite the loss of his own mother just a year earlier.  Thus marks the beginning of a valuable friendship.

The fine production is significant considering it is a fact-based biopic of a period of Lennon’s life that has not been explored on film. Cinematographer Seamus McGarvey (Atonement, 2008) has crafted some colorful renditions for this period film.  The two sisters are also color-coded, Julia in red and pink, and Mimi, back and grey.  A bit too dramatic at times, but the point well taken, maybe something to do with director Sam Taylor-Wood being a visual artist before this her first feature film.  Also, some scenes may look melodramatic, but I was so immersed in the story I had thoroughly enjoyed them. The most moving scenes come at the end, and all the way through the credits.  That is when real photos and actual historical accounts are revealed, a poignant resonance to the film.

At the beginning of the end credits, we see that the film is dedicated to Anthony Minghella (1954-2008), the Oscar winning director who had brought us the The English Patient (1996), Cold Mountain (2003) and The Talented Mr. Ripley (1999), to name a few.  Minghella was instrumental in encouraging director Sam Taylor-Wood to make the transition from visual artist to filmmaker, and had worked with her on her short Love You More, which has earned her a nom for the Golden Palm at Cannes 2008.

Nowhere Boy garnered four BAFTA nominations including Outstanding British Film and Outstanding Debut Director for Sam Taylor-Wood.   Both Scott Thomas and Duff were nominated for BAFTA and The British Independent Film Awards, which Duff won, as well as the London Critics Circle Film Awards. Johnson’s impressive performance also led him to noms and wins.  Overall, a moving tribute to a pop icon and the two mother figures that had shaped his early life.