These last months of 2012 see a bumper crop of film adaptations from literary sources. We have an eclectic array from the minimalist rendition of Yann Martel’s Life of Pi, to this long awaited maximalist Les Misérables, adapted from Alain Boublil and Claude-Michel Schönberg’s 1980 stage musical based on Victor Hugo’s 1862 novel. From Ang Lee to Tom Hooper, we are gratified on both ends of the spectrum.

It is a shift too for Hooper, fresh from his much smaller scale, Oscar winning The King’s Speech (2010), to turn and adapt a successful stage musical into a huge cinematic production. Yes, maximalist could well be the word to describe Tom Hooper’s Les Misérables. 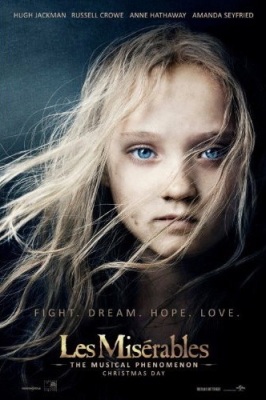 I sat in a Cineplex theatre that offered Ultra AVX, Audio Visual Experience: wall to wall screen, big sound, huge images. Now of course, I would have seen it on a regular screen and with smaller head shots. For me, the AVX extravagance might even be a distraction. For as I watched the movie, it was in the small moments of torn sentiments, the minute scale of personal transformation, and the internal moral dilemmas so well acted out that I found Hugo a brilliant writer of the human soul. I don’t need big boom sound and maximized frames to sensitize me.

The epic scale is effective, and the cast is admirable in delivering a heartfelt performance. I can fully imagine the difficulty of casting, finding good film actors who can sing well. But overall, they are well chosen.

Hugh Jackman as Jean Valjean is impressive. No stranger to musicals, Jackman is a Tony Award winner himself, and here he is perfect for the role in every aspects, physiques, singing and acting. I’m glad to see he get a Golden Globe nomination for Best Actor (Comedy or Musical) in the coming Award Season.

Colm Wilkenson, a Broadway star dating back to Jesus Christ, Superstar and as Jean Valjean in the original musical of Les Miserables has a brief appearance as the Bishop, whose forgiveness of Valjean’s theft when he put him up for the night transforms the bitter soul of the hardened ex-con. His singing of course is impeccable.

Also glad to find out Eddie Redmayne can sing so well too. Like Jackman, he is a Tony Award winner, more recent and a much younger one. He plays Marius, among a group of young revolutionaries who set up the Barricade to defy the French militia. He is the young man who falls in love with Cosette (Amanda Seyfried) at first sight. Compared to his A Week With Marilyn, his performance here could well catapult him into more prominent roles in the future.

While many of the other main cast are not Broadway singers, their skills are laudable. Anne Hathaway singing ‘I Dreamed A Dream’ is probably one of the most successful trailers made. And here in the film, her affective appearance as Fantine only makes me wish she can stay a while longer. Good to see she gets a Golden Globe nomination for Best Supporting Actress (Comedy or Musical).

Russell Crowe’s singing experience could have come mainly from his rock band, but his voice is fine here as Javert, the prison guard and later policeman on the trail looking for Valjean through the years. Yet it is not the singing, but the acting that I expected more. I know he is supposed to be cold and harsh, yet it is the internal fervor and depth that I find lacking. I think Geoffrey Rush is a more convincing Javert in the 1998 film adaptation… and I suppose he can sing too.

A marvellous duo that serve as a much needed comic relief is Sacha Baron Cohen’s Thénardier, ‘Master of the House’ and his Madame played by and Helena Bonham Carter. What a contrast with her role as Queen Elizabeth in The King’s Speech. The Thénardiers make one apt comic duo with their lively screen presence, great comic timing, and wonderful singing from both.

I must mention the two young actors. Daniel Huttlestone shines in his role as Gavroche, the boy at the Barricade. He has delivered a mature and poignant performance. I hope to see him appear in more films in the future.

The other is in the movie poster, an icon taken from the Musical. It is the image of little Cosette, here in the film movingly played by Isabelle Allen. The look-alike of the two images leads me to this thought:

I’m surprised to find the film adaptation follow the musical to the dot in terms of the song sequence. I think every one of them is performed, plus one more, ‘Suddenly’, written by Schönberg for the film. I was expecting a bit more creative cinematic treatment on screen. Further, the whole movie is connected by one song after another with almost no dialogues. For the film medium, editing could be better used here for pacing and avoiding redundancy. I feel the 157 minute production could be much tighter. With Schönberg directly involved in the adaptation, I’m sure he must have wanted every song preserved. Cutting the length must have been a delicate matter.

Overall, Hooper’s bold attempt to have the actors sing live instead of record the songs in a studio pays off. A first in recent decades, singing while they are acting creates and captures the emotions of the moment. With the title Les Misérables, we see a lot of heartfelt tears, and pathos of the human condition laid bare and raw. But Hugo’s universal theme also flows out as ready as the tears, that the power of forgiveness surpasses all wrongs, and grace triumphs over law. An apt offering for the Christmas season.