I keep reminding myself, my evaluation of The Disappearance of Eleanor Rigby: Him and Her should not be affected by the appearance of Jessica Chastain, her real self, in the theatre. That was an unexpected and most exhilarating episode in my TIFF13 experience.

After over an hour waiting inline outside, we were ushered into the historic building (100th anniversary this year) that housed the beautiful Elgin and the Winter Garden Theatres. And lo and behold, I saw Jessica Chastain standing right there in a press line answering questions. Who can take a focused shot with steady hands while being herded like sheep quickly passing by Jessica Chastain? 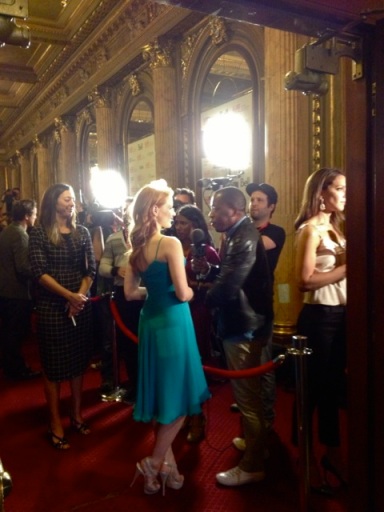 Here’s a sharper view but no better vantage point:

Disappearance is two films in one. It tells how a couple deals with loss, and the subsequent effect on their relationship, from His and Her point of view. Each is a 90 minute film that can stand on its own. We were shown first Him, then Her, with no intermission. I know at some other screenings, it’s the other way round. Now, that is intriguing. Will the audience perceive quite a different story then?

The concept had been found in previous films. Kurosawa’s classic Rashomon comes to mind. It presents four different points of view consecutively in one film from those involved in a crime. A more recent movie Vantage Point uses the idea but is miserably repetitive.

With Disppearance, we have a fresh, contemporary take on this high concept. Being made into two films allow deeper character development and more complex storytelling. It is innovative but not redundant as one might suspect. And that’s the ingenuity of writer/director Ned Benson. His screenplays for both are intelligent, perceptive and thought-provoking.

The first part Him is more elliptical. As viewers, we know little to start, but are eager to find out more about the couple. Why does an amicable and romantic relationship becomes incommunicable, and with the wife disappearing, walking out of the relationship? We soon find out the reason. I would not spoil it for you.

To deal with his situation, the husband, Conor (James McAvoy, Atonement), spends his energy on saving a losing business, his little restaurant in NYC. I suppose, as a man would, diverging his focus into career and business. Ciaran Hinds plays his father, a successful restaurateur who offers his son what he has established, a proposal that is turned down.

Bill Hader is deadpan funny as Conor’s good friend and chef in the restaurant. A friend can help him cope, but Conor knows ultimately he has to walk the path himself. The last scene is open-ended, a good lead into the Her perspective.

After watching Him, I was eager to find out Her story. Jessica Chastain (Zero Dark Thirty, The Tree of Life) is Eleanor Rigby, her parents having met in a Beatles concert, thus the namesake. But the film is not about the song, albeit we do hear the relevant line.

This second part is most gratifying. Not only does it fill in the gaps, it has gone deeper into Eleanor’s pains and her struggles to find herself once again… or maybe, for the first time. While Conor immerses himself in his restaurant, Eleanor returns to her family.

William Hurt plays Eleanor’s dad, a psychology professor who stands by as a loving father would, albeit helplessly. He suggests Eleanor take courses part time, which she does. Thus leads to some interesting scenes and meaningful dialogues with her prof played by Viola Davis, a role that the talented actor deserves. She gets to deliver that poignant line in the Beatles song:

All the lonely people, where do they all come from?

The veteran French actor Isabelle Huppert is Eleanor’s mother, always with a glass of wine in hand. There is no perfect family. She has her own issues to deal with, let alone contributing to a healing process.

Jess Weixier as Eleanor’s sister puts forth an excellent, complementary performance to Chastain’s. She is a single mother living in her parents’ house and raising an eight year-old son. She too, has to play the hand life deals her as best she can. From the Q and A after the screening, we learn of the long-time friendship between Chastain and Weixier, and it shows. Their performance makes me long for the experience of sisterhood.

And we learn too that Ned Benson wrote Her especially for Jessica Chastain, who ten years earlier introduced herself after watching Benson’s short film and was much impressed by it. Chastain was emotional when recounting the incident, moved that now ten years later, Benson is finally being acknowledged.

With such a high calibre cast, I could have sat there for another hour. There are lots to think about, and the cast makes it enjoyable for us to do just that in the films.

How can a response to any situation be shared while we see and feel so differently? One’s perspective is uniquely one’s own, an interplay of subjective perceptions, past experiences, psychological makeup, temperaments, rationality…. These two films screened back-to-back is the most vivid way to convey this point. How then can two people unite despite differences in perspectives?

As I write this post, Proust’s madeleines eating episode comes to mind. The memory and sentiments elicited from an experience is personal and subjective. And that’s what these two films show us. Even within the same scene, the camera takes on a different angle and point of view. Most interesting is that, even the dialogues are different. We can see the discrepancies in their memories and knowledge (or lack of) of themselves and each other. And when it comes to love, how each would want to hear the other taking the initiative to say ‘I love you.’

To top it off, we were given a chance to hear the cast share their experience in a Q and A session after the screening. From left to right Jess Weixier, Cirian Hinds, James McAvoy, Jessica Chastain.

All photos in this post taken by Arti of Ripple Effects. Please do not copy or reblog.