First off, Julian Assange had condemned the making of the film. The WikiLeaks founder had written to Benedict Cumberbatch (12 Years a Slave, August: Osage County) to dissuade him from picking up the role as his onscreen persona. The letter was published on his website days prior to the film’s general release in theatres. After seeing the movie, I can understand why.

Cumberbatch has presented to us, kudos to his gripping performance and transformation to the Australian accent, an Assange that is fully committed to his cause of absolute freedom to access of information and safe-guarding of whistleblowers in the world with his online organization WikiLeaks, and yet, viewers also see a man who is egotistic, callous, and even to the point of fanatical.

With the portrayal of the different facets of the man, we are confronted with both sides of the issue of transparency. On the one hand, governments, banks, and institutions are made accountable and corruptions and wrongdoings can be exposed. A consequence could be, as in the leaks of 250,000 US diplomatic cables (Cablegate), the inevitable compromising of privacy and security of individuals, leaving lives at stake, such as informants in dictatorial regimes as their identities are disclosed.

Indeed, we live in a messy, messy world. It would be much easier if things are in black and white, and if events can happen much slower for our grasp. The styling of the film could well have conveyed some of that sentiment. It tells the story of Assange’s founding of WikiLeaks and its cases in slick, flashy and fast paced, montage-like treatment. Certain concepts are rendered in a fanciful, almost cartoonish way. Coming into the theatre without much expectation, I have no qualms with the visual metaphors in depicting cyberspace and the digital hacking workhouse.

Following the cases that flash by may be a bit rash on first viewing, but they are thrilling sequences. From a David and Goliath battle of one man against money laundering in the giant Swiss Julius Baer Bank, to political death squad in Kenya, to the now termed ‘collateral murder’ of Reuter reporters and innocent bystanders by U.S. helicopter pilots in Iraq, to the recent Bradley (now Chelsea) Manning leaks of Afghan and Iraq army logs and 250,000 diplomatic cables, we as viewers may want more in-depth handling. However, as this is not a documentary, director Bill Condon (Dreamgirls, Gods and Monsters) has dealt with the subject relatively well within a two hour period.

The movie is based on two books which Assange had denounced in his letter to Cumberbatch, claiming their malicious intent and the lack of truths. One is Inside WikiLeaks: My Time with Julian Assange at the World’s Most Dangerous Website by Daniel Domscheit-Berg, an initial follower who soon becomes Assange’s right-hand-man, until the leaks of the diplomatic cables. Domscheit-Berg’s main concern is the lives that would be compromised if the cables are published without redacting and screening, while Assange insists on unedited, all out exposure. For his role as Daniel Domscheit-Berg, Daniel Brühl (Rush) delivers a convincing performance that matches Cumberbatch’s in the film. 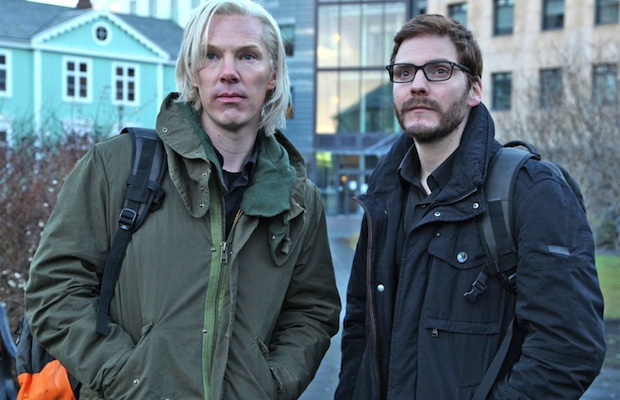 While the cast includes such fine supporting actors as Laura Linney, Stanley Tucci, David Thewlis, Dan Stevens… it is Cumberbatch and Brühl that carry the whole show, with the two starting off as complementary partners, albeit Assange remains the domineering one, to the disintegration of their relationship. For those who like to compare movies with similar subject matter, this is no Social Network. ‘Socializing’ is too trivial a word here. WikiLeaks involves much more dangerous and deadly issues. If anything, Condon’s is a light approach to presenting the complex and controversial subjects of transparency, privacy, and global security.

After watching the movie, I was surprised to discover the generally low ratings it receives. I admit, one can’t compare it to the intricacy of The Social Network, but it is still an entertaining, visual synopsis of some ongoing news events that deserve our attention. The film is a springboard to some needed thinking and discussions before drawing conclusions for ourselves, as the character Assange urges us to do at the end of the movie. Alas, here’s the rub. In our messy and blurry world of truths and fiction, that just may not be an easy task to do.