That we use a TV series to mark the beginning of a new year speaks volumes about our contemporary life. However, we are products of our time and culture, and our annual waiting has run its course of patience training. So, let the games begin.

There are so many characters to reintroduce to us that I can understand Julian Fellowes has to write a fast-paced opening. In the first hour, almost all the scenes are like vignettes, spanning 30, 60, or 90 seconds. That means, if you don’t much care for one plot line, like Mrs. Patmore’s ambivalent encounter with an electric mixer, you can just count a few more seconds, you’ll see another character with another dilemma. 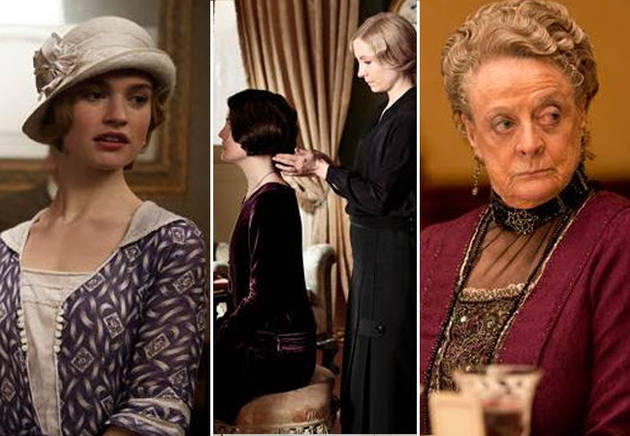 Is it an apt opening? I must say, as with that of Season 3, I am a bit underwhelmed. But I’m sure, as the episodes roll out, I’ll get warmed up real soon. After all, there are so many characters and plot lines, there must be one that I like.

Season 4 opens six months after Matthew Crawley’s very untimely death, 50 years too early according to his widow. Mary’s sorrow has shrouded the first hour of this two-hour special, subtitled ‘House of the Walking Dead.’ So we just hope that Mary will soon take her grandmother’s advice, choose life over death. Violet Crawley remains one of my favourite characters, she beseeches effectively at the right moment, and despite her old age, is more lucid than her son.

We see Robert Crawley’s less than amiable self once again, trying to take charge of grandson George’s share of Downton by sidestepping Mary, all in the cover of protecting her fragile emotions. No malicious intent there but merely convenience over principle. Violet Crawley has once again shown that mother knows best. This has got to be my favourite line of the whole episode, an eighty-something Violet Crawley talking to her sixty-something son Lord Grantham:

When you talk like that I’m tempted to ring for Nanny and have you put to bed with no supper.

So it is a rewarding scene as we see Mary finally decides to come out of the land of the dead, crying over the shoulder of not her parents’ but Mr. Carson’s, who has seen her grow up and always has a soft spot for her. That’s one of the few moving scenes in this special.

Mary could have gotten closer to her mother-in-law Isobel Crawley who on her own has to deal with the loss of an only son. Mrs. Hughes has done a kind act, drawing her out of mourning by appealing to her benevolent spirit, while at the same time helping Charles Grigg, Mr. Carson’s former showbiz partner, to get back on his feet. To kill two birds with one stone, or invasion of privacy? Depends on who you ask. Nevertheless, I’m sure at the end of the day, Mr. Carson would thank Mrs. Hughes for intruding into his past so he can find some reconciliation with Grigg.

A character that seems to have turned into a lively spark of the household, hoisting the flag of modernism, other than the obvious, ever bubbly Rose, is Lady Edith. She has taken hold of her life, venturing out to seek her own fortune, or misfortune, in career and in love, disregarding her father’s safe standards. In the London social scenes we see some fresh, Gatsby-eques fashion and set designs. Her love interest, Michael Gregson, is willing to take up German citizenship in order that he can divorce his lunatic wife and marry Edith. There in the 1920’s turning to Germany? I can expect the plot to thicken quite a bit later.

O’Brien’s midnight move is an efficient way to handle actors not renewing their contracts. Now this one is easier to swallow than killing them off. With no obvious villain left to be his partner or rival, Tom Barrow has to shoulder the whole realm of evil plotting against the innocents. But with Nanny West, he just hits it by luck. So now he’s in favour with Cora Crawley. Who’s going to be his next victim?

Mr. Bates has been quiet, while Anna has some adventure as chaperone of Lady Rose to a working-class dance hall. I have not watched any of the upcoming episodes, but I feel Bates and Anna can be given more story and screen time. Let’s say, their strong relationship can withstand some slings and arrows Julian Fellowes wishes to hurl their way.

So what do you think of Downton Abbey S4 E1? Favourite scene and characters? Quotable quotes?