Here’s a Downton episode that shows why it keeps gathering fans. That’s when every plot is captivating, and every other line uttered by the characters is a quotable quote, plus, two strong female characters saving the day: Violet Crawley upstairs, and Mrs. Hughes downstairs. Thanks to them, the good regain their zest for life (Mary and Isobel), and the bad are banished (Edna Braithwaite).

The most important storyline of course is Anna and Bates. And Mrs. Hughes is the only one to know about the rape. I have been successful so far to block out spoilers for future episodes but I hope Mrs. Hughes is wise and strong enough to make sure the right steps are taken in this heart wrenching case. After the most controversial tragedy befalls a faultless character, we’re all eager to see the aftermath.

Anna is thrice victimized. First raped, then silenced, and ultimately guilt-laden. I’m sure such a scenario is real even for today. “I must have made it happen. I feel dirty. I can’t let him touch me because I’m soiled.” A gap has developed so quickly like the ground has parted suddenly between a once loving couple. Now Anna and Bates are standing on opposite sides of a deep chasm. Mrs. Hughes urges her to go to the police to report, and tell Bates about the assault. She can see how hurtful it is for him to suffer from not knowing. But Anna sees the possible reality for Bates. “Better a broken heart than a broken neck.”

Several people have noticed Anna’s recent silence. Who wouldn’t? But not many would ask Bates directly except of course Lord Grantham himself. Julian Fellowes has written him some good lines. I just want to quote the whole thing here:

“There is no such thing as a marriage between two intelligent people that does not sometimes have to negotiate thin ice. I know. You must wait until things become clear. And they will. The damage cannot be irreparable when a man and a woman love each other as much as you do.”

But as always, the punchline comes after a pause:

“My goodness that was strong talk for an Englishman.” 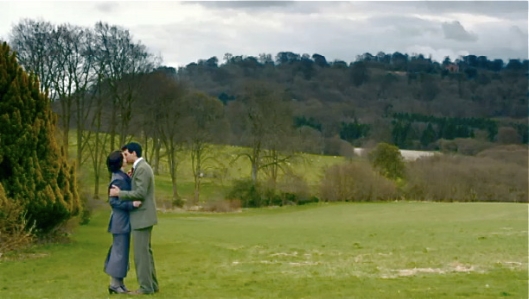 On a slightly more pleasant note, Lady Mary’s dilemma regarding Lord Gillingham and his lightning speed of a marriage proposal. Michelle Dockery has put forth some very fine acting in this episode, especially the scene when they are walking on the green grounds of Downton, when Gillingham asks her a very short question: “Will you marry me?” The setting is romantic, the cinematography gorgeous, but this is what I’m most gratified to hear from Lady Mary:

“I can’t. I’m not free of him. Yesterday, you said I fill your brain. Well, Matthew fills mine. Still. And I don’t want to be without him, not yet.”

After all, it’s only about seven months after Matthew’s death. Further, if Tony Gillingham can discard a previously engaged relationship so readily, what kind of a lover will he be to Mary? Again, I don’t know about any future story development, but in my heart, I wish Mary would wait a while longer. But, she gives him a warm kiss though. What a conflicting heart. Did she say later that she’d done something she might regret?

Same with Edith. Have you seen anyone signing away a document without giving it even just a skim over? Julian Fellowes knows exactly where to grab our attention… when the character is least attentive. This is a document prepared by her very sincere-looking love interest, the man admittedly had had a ‘dubious, misspent youth’, and who had won back everyone’s poker losses from a crook within the same night. Oh but love conquers all fears for Edith. Lady Rosamund reminds her she’s “gambling with her future”. So Gregson leaves for Munich the next day. Interesting.

While in London, we’re introduced to the first black character in Downton Abbey, the jazz singer Jack Ross, who leaves a fine impression on Lady Rose, launching another interesting plot line.

And don’t you just love Mrs. Hughes even more, a bulwark of discernment and authority? Tom is wise enough to come downstairs to seek her advice as Edna blackmails him to marry her for a fake, just-in-case kind of pregnancy. Even Thomas (it’s Mr. Barrows now) the schemer isn’t a bit sympathetic.

And it’s Mrs. Hughes again who is so kind, and sweet, to restore a loving memory for Mr. Carson, framing up his once, young love. Can you imagine Mrs. Hughes taking time off Downton to go to town to shop for a nice picture frame? Anyway, it’s good to know these characters have heart, and are not afraid to show it. Very well done here. And no, I don’t particularly wish that Mrs. Hughes and Mr. Carson would become late romantics. They are just fine now. It’s much rarer to see genuine friendship than romantic love.

Mr. Carson gets the best quote here in Season 4 Episode 3:

“The business of life is the acquisition of memories. In the end that’s all there is.”