Two movies this year represent the opposite ends of a cinematic spectrum. One is on the cutting edge of technology in IMAX, with huge visual and sound effects, taking the audience far out into space. The other is a black-and-white film shot in boxy Academy ratio, a quiet focus on one individual.

Interestingly, both deal with the similar theme of exploration, albeit from contrasting perspectives. Interstellar leads us to outer space; Ida brings us inward to explore the inner space of the self.

This is not a full review of Interstellar but just some ripples from my viewing experience. Nevertheless, the following discussion may contain spoilers, so consider this a caution. I did write a review of Ida, you can read it here.

First it’s the buzz, then it’s a bang. Christopher Nolan’s Interstellar has landed with a weekend opening of $50 million in box office sales; interestingly, still second to Disney’s Big Hero 6‘s $56 million. Nolan is no stranger to mind-boggling productions, Memento (2000), The Prestige (2006), and Inception (2010); and then there are the legendary Batman/Dark Knight series, but Interstellar is his most grandiose… and loudest.

Some time in the future, we see Earth barely habitable. Gravitational abnormalities have offset the functioning of this meagre planet, which has deteriorated into an uninhabitable dust bowl. Space exploration is prohibited, for the mere survival on Earth has become the priority. The younger generation is encouraged to be farmers, growing corn mainly as it seems to be the hardiest of crops.

Even NASA has gone underground, yes, an alarming irony. Farmer Cooper (Matthew McConaughey), a former pilot and astronaut, stumbles upon it and is quickly persuaded by Professor Brand (Michael Caine) to come out again to pilot the space craft ‘Endurance’ to seek out new lands, for the sake of his children, as they could be the last generation on Earth. Further, Brand’s ambition echoes Cooper’s ideals that humans are explorers and pioneers, not caretakers of this dusty land.

To accompany the exploratory spirit, we hear the ear-piercing blastoff of ‘Endurance’ into space. I was in a ‘regular’ theatre, not IMAX, and not the UltraAVX (Audio Visual Experience), so it was bearable for me. For realistic depiction, I can totally understand why such volume is needed. But I did find there were moments where the sound had drowned out the dialogues at the most critical points.

Regardless of such mishaps, the music is commendable. Noland’s music collaborator in the past, film composer Hans Zimmer’s soundtrack exudes more than realism. His score involves an ensemble combining 34 strings, 24 woodwinds, 4 pianos, and a 60 voice choir. But the major, humungous sound comes from a 90 year-old pipe organ in London’s 12th Century Temple Church.

I’m glad the pipe organ is the instrument of choice and not, say, electronic heavy metal band with guitars and drums, because loudness is not a self-serving end. The huge, stunning sound of the pipe organ evokes sacred, cathedral music, and here, the cathedral of space. Into the vast and lofty universe, human exploration is more than mere colonization. Space travel is the vehicle by which infinitesimal human searches for the ultimate or to attempt comprehending minutely the grand design. The huge sound of the organ literally vibrated under my feet, aptly depicting our awe-inspiring universe. I must stress too that there were quieter moments as well, I especially enjoyed the flowing strings sending the spacecraft towards Saturn like a cosmic ballet.

In their collaboration process, Zimmer and Nolan may had been fascinated by the intricate machinery that is the construction of the organ, or the pipes that look like rocket burners, or its loudness best to depict the grandiose human venture of space exploration, or as Zimmer puts it, to “celebrate science”. But maybe unbeknownst to them, that deep human quest in search of the Infinite could well be the hidden inspiration that sparks the sounds in Interstellar, just like in the movie, unbeknownst to Murph (Mackenzie Foy/Jessica Chastain), Cooper’s scientifically-minded daughter, a well-intended ‘ghost’ tries to communicate with her by leaving hints in codes, guiding her onto a purposeful path.

Coincidentally (or not) the recent groundbreaking Rosetta’s Philae probe landing on Comet 67P/Churyumov-Gerasimenko has ignited jubilation not just because of man’s achievement, but also, as a news announcer said, the probe could bring answers to questions such as ‘how did we get here?’, ‘are we alone?’ or even solve the enigma of ‘life itself.’

Throughout the movie, we hear Cooper mention ‘They’ many times. ‘They’ have led him to discover the underground NASA site; ‘They’ had constructed the several dimensions, the time/space reality… His daughter Murph has asked him, “Who are ‘They’?” Cooper might have the inkling of who ‘They’ are at the end of the movie: ‘We brought ourselves here,’ he says. He might be the agent, but there still remains the question of the a priori Initiator: who had constructed the different dimensions to start with, the time/space continuum, the planets, the stars, galaxies, wormholes, or, gravity?

I feel the organ music is just right for the ultimate exploration.

In contrast to the sound of Interstellar, Ida is a film that offers silence.

Anna has been raised as an orphan in a Catholic convent in post-war Poland. At eighteen, on the verge of her vow to become a nun, Mother Superior tells Anna to seek out her only, closest relative, her Aunt Wanda. The film follows Anna’s trip to the city. In her uniting with her Aunt, she also discovers her past, and a totally different identity. Her parents were Jewish, killed in the Holocaust; her birth name is Ida Lebenstein.

With her Aunt Wanda, Ida goes on a road trip to seek out those who might know her family’s past. On the way, they pick up a hitchhiker, a jazz musician called Lis, who exposes Ida to a new tune, and a different set of pursuits. Her cynical, life weary Aunt also reveals to her what other lives are like. With the opening up of possibilities comes the burden of choice. 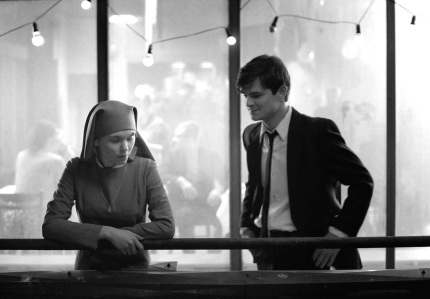 The film is shot in black and white, boxy Academy ratio like early films. It carries minimal sound, no score, sparse dialogues, but the images speak with deep poignancy. In the flow of human history, what is one individual anyway? But what responsibilities one has to bear for one’s decisions. What leads Aunt Wanda to jump out the window? Or Lis to go on travelling, playing the saxophone gig after gig? Ida or Anna, what does each name hold in terms of meaning and purpose?

Director Pawel Pawlikowski had done post-graduate work in philosophy and literature at Oxford. His background might have led him to explore with a contemplative mind. He must have known too that the self is a vast space for exploration, as unknown and inexplicable as outer space, yet no less a subject of intrigue.

And personal identity, another realm to decipher. Is identity determined by birth, race and ethnicity, or something else? Does one have a choice? How does one define oneself? Is there anything worthwhile to pursue that transcends traditions or even religion? Maybe the best way to explore that inner space is through silence and a meditative mind. You don’t want to let the irrelevant sound drown out the relevant. Truth may just be hidden in a still, small voice.

The Tree of Life by Terrence Malik

Notes on the Synthesis of Films, Art… Life?

20 thoughts on “Interstellar and Ida: The Sound and Silence of Exploration”