Vermont has so much to offer on top of the scenery. But I’ll start with that.

The hills are alive overlooking a breathtaking view of the distant Green Mountains. That was what attracted the von Trapp Family to settle there. Right, that’s the Family von Trapp of The Sound of Music fame. Goerg and Maria moved to Vermont in 1941 and bought a 300 acre farm near Stowe, as that location reminded them of their native Austria. There on the mountain top they started a guest lodge and had since developed into what is now an upscale resorts on 2,500 acres.

The Trapp Family Lodge in Stowe, VT, owned and operated by the eldest son of Maria and Georg von Trapp:

Just 36 miles west of Stowe was Lake Champlain on the edge of Burlington, a vibrant college town. The Lake is a large body of fresh water, once called the sixth of the Great Lakes. It borders the States of Vermont, New York and stretches up north to Quebec, Canada.

At the pier of Lake Champlain: 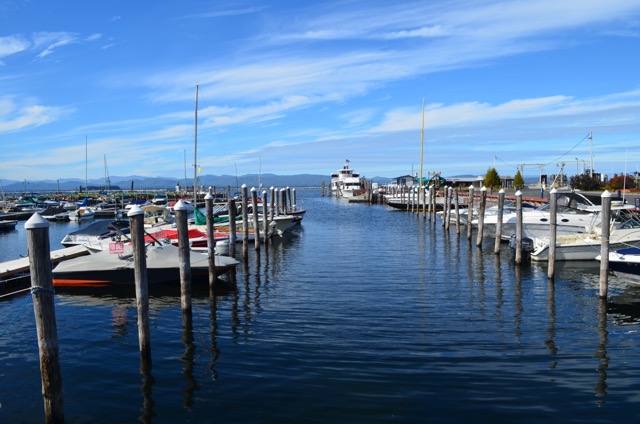 I totally get how this boat is named:

I took the Vermont scenic drive Rt. 100 and headed south from Stowe. My destination was Bennington in the southwest corner of the State.

Not far from Stowe I arrived at Waterbury, a town with lots of restaurant choices for such a small place. I visited two major tourist sites there.

Just off RT 100 was the Ben & Jerry’s Ice Cream Factory, and they sure were prepared for the hundreds of visitors on the day I was there. A well organized and informative factory tour let me see how two college buddies’ $50 investment on an online ice cream making course had come to fruition. What’s impressive is their commitment to use supplies from local farms and cows that are steroids-free. A fair trade business to ensure global responsibility. (no, I don’t get a buck for writing this.)

In contrast, not far from the madding crowd at Ben & Jerry’s was the serene Waterbury Reservoir. When I got there it was already past sunset. So glad I could still take these photos:

Continued on Vermont Rt. 100 south I came by this most interesting site in the fields outside the small town of Waitsfield, population: 1,719 (2010). Here I found The Big Picture Theater, screening The Martian:

Two posters at the door caught my attention: 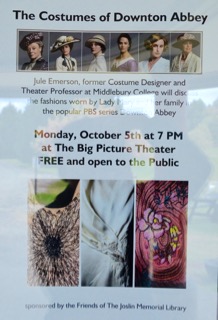 One was a “Kickstarter Film Festival”. An indie film festival in this area? I was most impressed.

Another poster was about a talk on “The Costumes of Downton Abbey”. Here’s what the poster says if you can’t see it clearly (above right):
“Jule Emerson, former Costume Designer and Theater Professor at Middlebury College will discuss the fashions worn by Lady Mary and her family in the popular PBS series Downton Abbey. Free and Open to the Public”

No place is too remote for films and the Crawleys.

Rt. 100 offered some fall scenery very different from NH. I was attracted by the clumps of trees in distant hills along the road. It was a cloudy day, so instead of seeing bright and cheery foliage, I was captivated by the moody atmosphere. Just as beautiful: 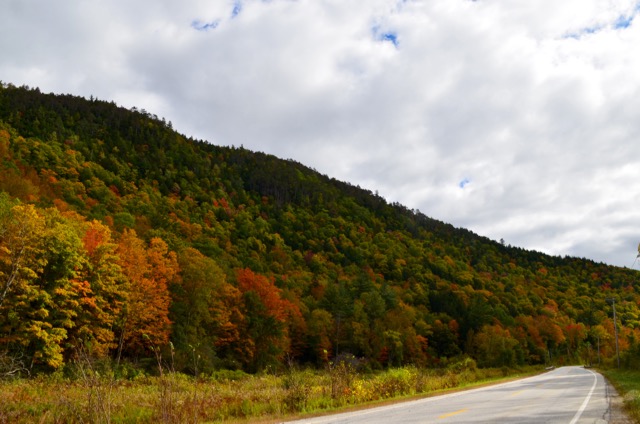 Before arriving at Bennington, I stopped by South Shaftsbury to visit Robert Frost Stone House Museum. Frost bought the stone house and its 80 acres land in 1920, moving from the White Mountains in NH to warmer Vermont mainly for “a better place to farm and especially grow apples.” Aren’t we glad that he threw in some poems as well in his time-off from apple-picking.

In this fertile soil Frost not only gathered apples but poetic harvests as well. In the Stone House, there’s a “Stopping by Woods” Room where the Poet wrote his most famous “Stopping by Woods on a Snowy Evening.” A facsimile of the handwritten manuscript and many other pertinent materials – parody included – were displayed. Trust my words. I didn’t want to get caught taking pictures in a ‘Photography Forbidden’ premises.

I did take photos outside of Frost’s Stone House:

and his juicy legacy, the apple tree in front of the house:

From Shaftsbury I drove the few blocks to Bennington, There at the back of the First Congregational Church was the cemetery where Robert Frost was buried.

Yes, the sky was that blue that day: 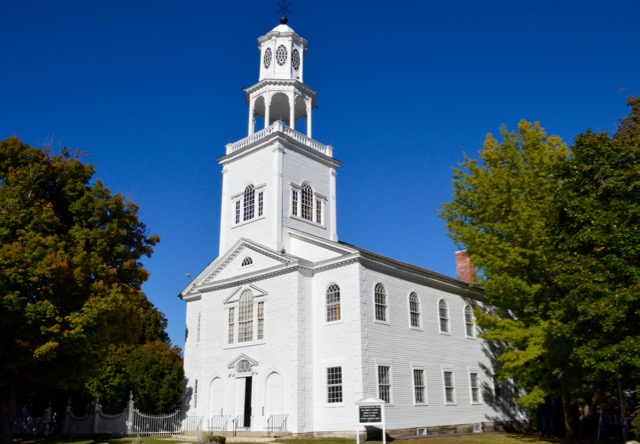 Frost’s grave gathered no pens or pencils as I saw in Authors Ridge of Sleepy Hollow Cemetery in Concord ; instead, people have left pennies there. If they were meant to be tributes to the Poet, it’s simply mind boggling to see how people could think a penny would suffice. Allow me to offer a little alteration to a common saying, standing in front of Frost’s grave: If you don’t have anything poetic to leave there, don’t leave anything.

22 thoughts on “Vermont: More than Scenery”