The remaining summer month isn’t going to be long enough for a slow reader like me to finish all the books I’ve started. There are 7 titles on Goodreads that I’m ‘currently reading’, one of them has been there since the Jurassic Period. Ok, maybe not that long, but I haven’t given up The Guermantes Way just yet, so I won’t delete it. I’m sure Proust understands, for there are more pressing matters.

First off, the horrific terror attack and mass murder in Nice sparked off an urge in me to, somehow, in whatever way, connect with France. It’s a bit late to participate in the blog event ‘Paris in July’. But since Nice, I’d started two France related books. And then there’s Germany, and now a priest inside a church while conducting mass…

The Angel of the Left Bank: The Secrets of Delacroix’s Parisian Masterpiece by Jean-Paul Kauffmann

This enticingly thin paperback has been sitting on the shelf quietly for years. I’ve long wanted to read it although I’d no idea what it was about, one of the hand-me-downs from my son’s college reads. Now that I’ve started it, I know this one’s going to be a slow cook. Even though just 217 pages, I know I can’t rush it. Exactly as the title denotes, the book is about one painting, Eugène Delacroix’s (1798-1863) ‘Jacob Wrestling with the Angel’, a wall mural in the Chapel of the Holy Angels inside The Church of Saint Sulpice in Paris. Why did Kauffmann write about this particular painting? Why did Delacroix choose to paint this enigmatic episode of the Bible? Who is the ‘Angel’? I want to find out the hidden story behind the creation of this masterpiece. Apparently there are secrets to be told.  I’m most curious to see the epiphany that both the painter and the writer must have experienced relating to it. Simply put, for us who feel there are days wrestling means nothing close to a TV pseudo sports program, maybe this book could be an enlightenment.

First published in Germany, now an international bestseller, The Little Paris Bookshop is a barge floating on the Seine River in Paris. Monsieur Perdu, the ‘Literary Apothecary’, is the owner. Now this is an interesting concept. M. Perdu prescribes books for any ailment his customers happen to be afflicted with. Bibliotherapy if you will. Not a bad idea. He has a book suggestion for everyone he encounters, so a clever way for German author Nina George to weave in her views on various literary works, her salutation to literature and reading. But of course, George isn’t just leading a book club discussion but telling a story. So she deftly brings us to learn more about M. Perdu’s past. While well-versed in bibliotherapy, M. Perdu has a wound that’s deep and sore, for he’s a victim of a lost love. Can the Apothecary heal himself? All signs point to a heartening, summer read.

Here’s one that I think I’ll finish first:

Words Without Music by Philip Glass

This one beats all my current reads in capturing my attention and interest. The contemporary composer Philip Glass (born 1937) is renowned as a ‘minimalist’ in his musical style, a label he frowns upon. Now about a quarter into Glass’s memoir, so mainly about his early life and the start of a career, I find what’s minimal is only the physical materials of life, the lack of money to pursue his dream. As for passion and talents, Glass is endowed with abundance, and the artistic milieu in which he immersed himself is astoundingly rich and fertile. Above all, the Bohemian living during his early days is idyllic. That’s why I’m mesmerized by his story, the pursuit of a dream driven by pure passion and inner drive.

Born in Baltimore to a middle-class, secular Jewish family, Glass left home at just 15 to enter the University of Chicago, majoring in philosophy and mathematics. After that, he knew he wanted a career, no, a life, in music, against the wishes of his mother and uncles, who ran a family building supplies business in his hometown and wanted him to take over some day. But Glass was determined to march to a different drummer. After Chicago, he went to NYC mainly to get into Juilliard, not knowing he wasn’t even qualified. So he started with an extension course to work his way in. Later as a full-fledged Juilliard student, he devoured every learning opportunity. He had earned his living doing all sorts of jobs, laborer, steel mill worker, taxi driver. Later to Paris, India, Glass shows us a life journey full of gratifying struggles and interesting encounters. What more, the memoir is a social history of the Beat Generation. Deeply immersed in the zeitgeist of the time, Glass’s personal connections with other musicians, artists, poets, writers, theatre actors and producers, and filmmakers make a fascinating insider’s story. His contact list a who’s who of the Beat Generation. Lots of ripples stirred up in me and definitely a future post coming.

This one patiently waits:

The Moviegoer by Walker Percy

I had listened to the audio book a few years back, and wanted to reread it right away, but didn’t. After that, I forgot about it. By chance I saw it in the Bookstore at Regent College on UBC campus a couple months ago, I quickly took that single copy out from the shelf. There are few books I buy at regular price, this is one of them. I want to revisit it; with my own copy, I can write on the margin, and I know I will with this one. Despite the title, it has nothing to do with the glamour of Hollywood movies, or the pop entertainment culture of the day. Rather, this National Book Award winner (1961) is internal, reminiscent of European writers like Camus or today’s Tom McCarthy.

These two will take a while to get to:

The Truth According to Us by Annie Barrows

Barrows’ previous book is the wildly popular The Guernsey Literary and Potato Peel Pie Society published eight years ago. I’d enjoyed the lively characters in Guernsey amidst the troublesome setting of WWII, with the island occupied by German soldiers. Just curious to read children’s author Barrows’ first solo publication for adults. The Truth brings Barrows back to the home state of her aunt and primary writer of Guernsey, Mary Ann Shaffer, who died before completing the book. Family saga in small town West Virginia in 1938. If you’ve read this one, how is it compared with Guernsey? Should I even start it?

The Nest by Cynthia D’Aprix Sweeney 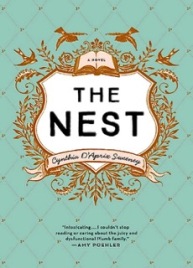 If I want a breezy summer beach read, maybe I should start with this one. But this too can wait. I got it mainly because of the future film adaptation. Sweeney’s debut work reportedly fetched a 7-figure advance from Ecco; not surprisingly, film rights were snatched up soon after. What should be noted is: by whom? Well, as evidence of the booming book/movie enterprise, Amazon Film it is, and Jill Soloway (Transparent) will direct. Note also, just saying, here’s a book with Amy Poehler’s endorsement on the cover. Have you read it? Are you looking forward to its movie adaptation?

Inside Llewyn Davis: A Serious Man in Greenwich Village

The Elegance of the Hedgehog