Whenever I’m in Toronto, the AGO is a must-see. Over the Christmas holidays I had the chance to catch the last few days of an awesome exhibition there: Early Rubens, plus some impressive works from other artists.

I use the word ‘awesome’ not casually, I mean exactly as the word is originally intended. Flemish Baroque artist Peter Paul Rubens’s (1577-1640) paintings are huge, depicting Biblical characters and narratives in epic scale. On a wall I read this Rubens quote:

I confess that I am by natural instinct better fitted to execute very large works than small curiosities. Everyone according to his gifts; my talent is such that no undertaking, however vast in size or diversified in subject, has ever surpassed my courage.   –  Peter Paul Rubens, Letter dated 1621

Glad he mentioned ‘Everyone according to his gifts’, or else those who are afraid of heights would never be able to score any artistic achievement.

Anyway, this one in particular haunted me, The Massacre of the Innocents, around 1611-1612. Mothers try desperately to protect their sons against muscular men:

Those entangled, near-naked bodies are men following an order from King Herod to kill all babies under the age of two after hearing that the King of the Jews had been born in Bethlehem. Mary and Joseph took their baby son Jesus and fled to Egypt to escape a ruler’s jealous rage and his desperate cling to power. Yes, Jesus and his parents were migrants, one of the early political refugees escaping from a ruthless government.

Fast forward several centuries to 1903, and in contrast to the massive scale of human tragedy of the above painting, I was drawn to this very quiet, seemingly simple painting of a mother giving a bowl of soup to her child. The mother looks unwell and seems to give away what she needs to her child. This poignant and sparse scene entitled The Soup is Pablo Picasso’s social statement of poverty and homelessness: 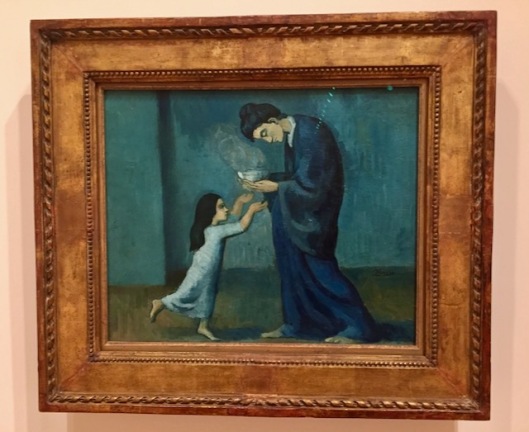 A more relaxed social scene. This painting from the 19th C. French landscape painter Eugène Boudin, Beach Near Trouville, linked my thoughts to a movie scene right away. Boudin’s work is dated 1864, that’s around the same period as Louisa May Alcott wrote Little Women. Boudin depicts Parisian high society mingling on the beach town of Trouville. Notice the women’s dresses:

My mental association was naturally the Greta Gerwig directed Little Women beach picnic scene. I couldn’t help but compare their formal attires even at the beach and the actual chairs they sat on in Boudin’s painting with the beach scene in Little Women, so free and casual (not displayed in AGO):

Don’t you want to fly a kite with the March sisters on that sandy beach?

From the historic to the futuristic, the iconic Japanese artist Yayoi Kusama (born 1929) has invented visions of infinity with her experimental installations for three decades. Her work was exhibited at the AGO in 2017 and now the Gallery has a permanent set up Kusama called The Infinity Mirrored Room – Let’s Survive Forever. I had to reserve a time slot ahead for my visit. At my appointed time, which was another hour later, I still had to wait in line to go into the room.

It’s a room of silver spheres suspended from the ceiling and arranged on the floor set against mirrors. A person standing in the room will see seemingly infinite reflections:

Here’s the image of one silver ball in the middle of the room. I didn’t do any colour changes, so just interesting to see what looked to me was a silver ball came out green in the photo:

You can actually see me taking the picture. What does this all mean? According to Kusama, the room gives a person a sense of infinity and limitlessness.

Only two visitors were allowed inside the room at one time. And how long could we spend in there? One minute. A staff with a timer in hand monitored the flow of visitors. When our time was up, she knocked on the closed door for us to go out and another two would go in. Call it a visual oxymoron if you will: A one-minute taste of infinity. O the limits of our human experiences.

Alex Colville and the Movies

12 thoughts on “A Visit to the Art Gallery of Ontario”