National Theatre Live launched in June, 2009. Cameras are placed in strategic locations in the theatre to capture the stage performance live and broadcast to various venues the world over. According to the NTL website, over 3.5 million people have experienced this remote viewing of plays from London stages, with over 1,100 venues around the world, 550 in the UK alone. For the price of a movie ticket, I can be transported to the front row of these performances.

I ‘discovered’ this treasure too late, well, too late to see Skylight, with two of my faves Carey Mulligan and Bill Nighy. Skylight received 7 nominations for the Tony Awards coming this Sunday, June 7, including acting noms for Mulligan and Nighy, direction for Stephen Daldry, and overall Best Revival of a Play.

NTL’s Skylight had been shown in our Cineplex already, and I missed it. But, all is not lost. In the past two months since I knew about this treasure, I’ve watched three plays and have bought ticket to the October debut of Hamlet with Benedict Cumberbatch. Looking forward to that.

Here are the three shows I’d watched in the past few weeks. Click on the link to the NTL website for full descriptions. The following is just a summary of my thoughts.

The Hard Problem by Tom Stoppard 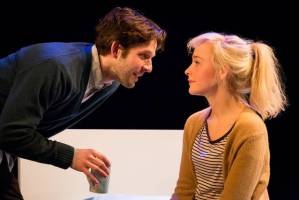 My full admiration to Tom Stoppard for writing a play to explore this hard problem, one that’s not very popular nowadays when science and technology reign supreme, when Dawkins speaks like the indisputable authority: Is evolutionary biology the all-encompassing codebook answering every human question? Hillary, a psychology research fellow at the Krohl Institute for Brain Science prays to God every night, simply madness to her fellow researcher. Her concerns: Can neuroscience explain consciousness, or beauty, or morality, faith, longings? And, sometimes one does need a miracle or two when dealing with personal regrets. The play is an intellectual odyssey with lively and energetic exchanges of amusing dialogues, humour that teases me with lines reminiscent of Rosencrantz and Guildenstern are Dead.

This is Stoppard’s new play in nine years. Mentored by Samuel Beckett, friend of Harold Pinter, writing for both stage and screen, Stoppard, at 77, remains one of my most respected writers. I’d loved Rosencrantz and Guildenstern are Dead, but his works on screen have been equally impressive with the Oscar winning Shakespeare In Love (1998), Parade’s End (2012, one of my fave TV mini-series), the Oscar nominated Anna Karenina (2012), and Empire of the Sun (1987, a unique and haunting chronicle of childhood).

And for this play, nobody is preaching anything here, there’s no need to, just raising the hard problem, that’s all. We hear that line in Hamlet ring out loud and clear: “There are more things in heaven and earth, Horatio, than are dreamt of in your philosophy.”

The View from the Bridge by Arthur Miller

Mark Strong is explosive as Eddie Carbone, the longshoreman who accommodates in his home two of his wife’s cousins, brothers and illegal immigrants just arrived from Sicily. Eddie’s possessive care and love for his niece Catherine who has been living with him all the years, turns to malicious jealousy as she falls for the younger of the brothers. Miller’s play is about the American Dream gone sour.

What an eye-opener of a stage play. Mounted at London’s Young Vic Theatre, the stage design is stylishly minimal. With audience viewing from three sides, it lays bare the human soul and its inexplicable and unbridled emotions. I have not seen anything like it. First off, can you imagine two men taking a shower on stage at the beginning of the play… with real water, and towards the end, that water turns into blood showering down, covering all the characters for the stunning, tragic ending.

Man and Superman by Bernard Shaw

This one, I must say hats off to Ralph Fiennes for his extraordinary energy. Playing Jack Tanner, a radical thinker of his days, and the reluctant guardian and later romantic resolve for a beautiful heiress, Fiennes leads us on a wild ride from reality to fantasy, from earth to hell and back again. Well, no superhero in our CGI saturated movies nowadays can rival. Blurting out lines after lines non-stop for over three hours, in one take, dialogues covering all the brilliance of Shaw’s philosophical, social, and political views, with spot-on timing and great fun. Which comedian can beat that? And of course, what he and Shaw had shown us is that words and the intellect can be more powerful and entertaining than on screen action sequences and technical wizardry.