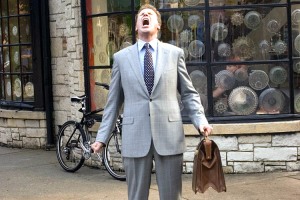 The excellent writing by Zach Helm handles a serious subject with style and humor. Reminiscence of “The Truman Show”, “Stranger Than Fiction” is a fresh and classy treatment of the existential questions of free will and fate. Will Ferrell is Harold Crick, an IRS agent. He lives by himself, eats by himself, and his favorite word is ‘integer’. Every morning, he counts the same number of strokes as he brushes his teeth, ties his tie in exactly the same number of seconds, takes exactly the same number of steps to catch his bus. His daily routine runs like clockwork…and he thinks he is in control of the minutest item of his life.

His secure, mundane world is turned upside down one day as he finds out that his life is being narrated, written by someone else. He is in fact a character in a novel, and what’s most devastating is, the author (Emma Thompson) is planning his imminent death. Sunddenly faced with his own impending demise, Harold Crick curses his fate, yells at heaven and protests in vain. Poor Harold is certainly not ready to die, for he hasn’t even begun to live. With the help of a literature professor, aptly played by Dustin Hoffman, Harold tries to turn a tragedy into a comedy. He soon finds out that although he cannot change his own fate, he can change himself, and he can become a happier person if he chooses to be, despite his ominous fate. In the baker (Maggie Gyllenhaal) whom he audits, he discovers for the first time in his life, love. Little does he know that this new found sentiment is a powerful force that has altered his myopic view so much that in an act of altruistic bravery, he steps right in the path of death and stares fate in the eye.

The message of the movie and the subject matters of life and death, fate and free will can easily be perceived as didactic and preachy if not being handled properly, but “Stranger Than Fiction” has successfully dealt with these issues with light-hearted humor and intelligent dialogues and characterization. Overall, an entertaining work of fiction, or, is it a whimsical portrayal of real life? … Strange, they’re so similar.