This is a must-see for all bird watchers, nature lovers, or anyone who lives in an urban jungle, thinking how one can stay there and escape at the same time. And, one would soon find this one-hour documentary just too short. 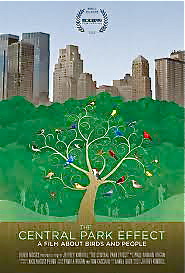 Beautifully shot, this exquisite gem of a film features its main characters the birds in Central Park. No make-up, no staging, no studio set-ups, all natural surrounding. Appearing also are the humans who dedicate their time, and some, their life in pursuing the sightings of these avian celebrities. The interviews of the birders show they are a species all their own.

Central Park is another major character in the film. I didn’t know this before, that it is completely man-made. The trees were planted there, the landscaping and ponds designed and built by human hands. But it is also nature. More than 200 species of birds pass through Central Park each year. During migration periods in the spring and fall, it is the hot spot of traffic thoroughfare, the hub of north-south continental flight routes.

Jeffrey Kimball is the film’s producer, director, cinematographer and narrator. I was so eager to see him in person for the Q & A after the film at the Vancouver International Film Festival on Oct. 8. Unfortunately, he had to rush back to his wife due to a medical emergency. I wish her well of course.

The 60 mins. documentary starts off right away by bringing us up-close to the avian paradise that is New York City’s Central Park, and with interviews of their inhabitants’ human admirers. What’s more interesting to hear than the exhilarating tone of the humans are the cheerful chirping of bird calls and songs throughout the film.

As a newly converted birder, I don’t need Jonathan Franzen to tell me the joy of birding, but it’s good to hear him share his view just the same: it’s ‘addictive’, that he would ‘miss work’ to go out to Central Park to have his fix of birdwatching. Oh, it’s also ’embarrassing’ too.

Yes, that’s the view of another birder, adult male. He shares that it’s been noted that birdwatching is not manly. There are guys who would carry their fishing rod and tell their wives they are heading out fishing, too embarrassed to admit actually it’s a birding they will go. It’s just… not cool.

Anya Auerbach, 15, echoes that sentiment. Not cool, geeky even. But does she care? The answer is obvious. She is not into fashion like her peers, but she is into something deeply gratifying.

As any birder would readily admit, binoculars hanging on their neck, and maybe a camera with a long lens on the side, they look like walking geeks, to be spotted and laughed at. But as they weigh the joy of actually seeing that rare thrush, to be labelled and misunderstood is a small price to pay.

Starr Saphir is the matriarch of birding in Central Park. She has been leading birding groups in the spring and fall, four times a week for over 30 years. She could well be a walking specimen of the psychosomatic benefits of birding. Diagnosed with terminal breast cancer for a decade, Saphir testifies to how watching birds keeps her going. “Looking at birds really takes away sadness…” When one considers the fleeting nature of life, the joy is even more precious.

Chris Cooper disappears from his human social circle every year between April to Memorial Day. His friends know from experience that he has gone birding in Central Park. They understand his obsession. In the film, we can see his contagious enthusiasm.

Birdwatching is like collecting. The numbers count, how many species you’ve seen, which ones, the rarer the higher valued. It’s like seeing a unicorn… or, a bit more down-to-earth, it’s like you’ve seen pictures of a movie star, but when you actually see her/him in person, it’s a totally different feeling and experience.

And to correct a misguided notion, birding is not a hobby, as one dedicated birder explains. Like raising children, it is a “deeply human activity.”

The Annual Central Park Christmas Bird Count is the longest running citizen science survey in the world. It is disheartening to note that the bird counts are dropping significantly in recent years.

Birds are nature’s celebrities, seeing them gives a birder deep pleasure and exhilaration. What’s most precious though, they are oblivious to their fame. They don’t flaunt their beauty, they don’t pose for pictures. They are as natural as can be.

As the credits roll at the end of the film, we see all those deserved to be named: species of birds that have appeared in the film.

CLICK HERE to the official site of the documentary Birders: The Central Park Effect.