It’s not too early to make up a Christmas gift list, or actually start some Christmas shopping. I’ve a recommendation here for a DVD that you can safely watch with your children. But you’d also want to watch it by yourself too, because then you can savour in solitude the touching moments an adult can appreciate, and yes, shed a private tear, and let the movie work its magic freely in your heart.

Miss Potter (2006) is the story of Beatrix Potter, the creator of Peter Rabbit, one of the best loved children icons of all times. The film is a gem glittering with acting talents. As Beatrix, Renée Zellweger (Oscar for Cold Mountain 2003) brings to the screen a most delightful character, her genuine and innocent demeanor captures the audience’s heart the very moment she appears. She receives nominations this year for a Golden Globe and a Saturn Award for her role in Miss Potter, and well deserved.

Ewan McGregor (of Star Wars and Moulin Rouge fame, no relation to farmer McGregor) plays the slightly comical first-time publisher who has made history with his appreciation and confidence in the talents of Beatrix. The two naturally fall in love. Like a Jane Austen novel, such a relationship is frowned upon by Beatrix’s upper-middle class family and openly forbidden. But this time, a hundred years after Jane, Beatrix boldly confronts the inequitable and restrictive Victorian values and norms.

Emily Watson, herself an Oscar nominee for her role in Gosford Park, (and she is excellent in Angela’s Ashes), plays a lively supporting role as McGregor’s unmarried sister. The social issue of the unmarried female in a male-dominated society is freely explored through her outspoken character, but not without poignancy.

I must mention the song written for the movie, which has won the 2007 World Soundtrack Award for Best Original Song Written for Film. “When You Taught Me How To Dance” is sung by Ewan McGregor in the film during a mesmerizing and moving scene. As the credit rolls in the end, this touching tune is heard again, this time in its entirety performed by Katie Melua. Now, she’s another story to write about.

The captivating soundtrack matches the beautifiul scenery and period costume, together with the excellent script and the whimsical animation of Beatrix’s animal friends, make the movie utterly enjoyable and gratifying, but still delivering effectively the depth of sentiments and the dramatic twists and turns.

The DVD includes background on Beatrix Potter, commentary by director Chris Noonan and a making-of documentary with extensive interview with Renee Zellweger, plus a music video performed by Katie Melua singing “When You Taught Me How To Dance”. A valuable collection and I’m sure, a welcomed gift.

As a companion to the movie, and another great gift idea, is the book Beatrix Potter: A Journal which came out last year. A visual journal in the vein of Nick Bantock, the book is an imaginary scrapbook Beatrix would have made to chronicle her own life, with handwritten entries and notes, amusing drawings, little attached booklets, photo albums, and letters that can be taken out from envelopes. The book corresponds amazingly well with the movie, like a visual commentary.

Here are a couple sample pages from the journal: 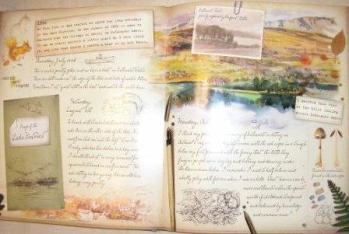 ~~~3 Ripples for both Movie and Book

8 thoughts on “Miss Potter for Christmas”