To read my Movie Review of The Hedgehog (Le Hérisson, 2009), CLICK HERE.

It’s all about seeing and being seen. 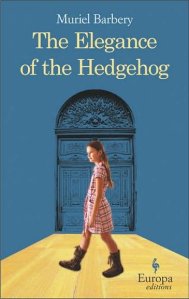 Hailed as the French publishing phenomenon in recent years, The Elegance of the Hedgehog has maintained 102 weeks straight on France’s best seller lists since its publication in 2006, and sold over 1 million hardback copies in 2007.

Author Muriel Barbery has created an intellectual delicacy for us to savor.   She is a former philosophy teacher in France and is now living in Japan.   Only in France you may say, where philosophy is still a compulsory subject in schools.  But no, it’s an international sensation reaching as far as South Korea, translated into half a dozen languages, sold its film rights, and garnered several literary awards.  The ripples finally reached North America last September… why so late?

This modern tale takes place in a luxury apartment at 7 rue de Grenelle, a prestigious address in Paris.  Its eight exclusive units are home to the upper echelon of French society, the elite in politics, finance, lifestyle and education.

Renée Michel knows too well what this is like… she lives here, in the quarter especially meant for her, the concierge.   For twenty-seven years she has served the residents well.   She knows how to keep her job.  Although in her mind, she thinks of them as  “a class that reproduces itself solely by means of virtuous and proper hiccups”, she keeps her thoughts very private, sharing only with her friend Manuela, the cleaning maid.

Renée’s self description may say just about what other people see on the outside, if they even care to look at her:

I am fifty-four years old… I am a widow, I am short, ugly, and plump, I have bunions on my feet and… I have always been poor, discreet, and insignificant.  I live alone with my cat…

For some reasons, these words attracted me to buy and read this book in the first place.  Herein lies the excitement.   The reader soon discovers that Renée is an autodidact.  A devoted library user, she studies on her own, philosophy, literature, history, art, semantics,  Japanese culture…  She avidly reads Kant, Proust, and Husserl after work,  contemplates phenomenology during work, and considers it not worth her while at either.  She names her cat Leo after her favorite writer Tolstoy.  On top of her eclectic reading, she listens to Mozart, Mahler, and Eminem.  She is a fan of the Japanese director Yasujiro Ozu whose works formed the classics of Japanese cinema.  And she loves Vermeer.

To survive in the social pecking order, Renée has learned to be clandestine.

Cut to Paloma Josse who lives on the fifth floor.  She is the 12 year-old daughter of a parliamentarian and his wife, who holds a Ph. D in literature.  Paloma’s older sister is a graduate student of philosophy.   But within this cocoon of sheltered upper-class family, Paloma might well be the most lucid of them all.   Her preoccupation is with the search beyond the status quo, the quest for meaning in this whole idea called life.  Among her many profound thoughts is this one:

People aim for the stars, and they end up like goldfish in a bowl.

Alas, she concludes in her 12 year-old mind, albeit being a precocious savant, that there isn’t much for her to stay on.  To escape her fate in the fish bowl, she is contemplating committing suicide on her 13th birthday coming up in a few months.

The book alternates between the ruminations of Renée and Paloma. Their sharp commentaries present some incisive, and at times, hilarious social satires.  Their personal reflections are perceptive and poignant.

Within the confines of the luxury abode, all seems to be mundane, routine, and hierarchical.  Until one day, a new tenant moves in.  He is Kakuro Ozu.  His presence at 7 rue de Grenelle changes the lives of both Renée and Paloma in a most extraordinary way.  For the first time in their lives, they have been seen, and appreciated.

Kakuro Ozu is a Japanese gentleman in his 60’s.  From his first contact with Renée, the moment she lets the first line of Anna Karenina slip out of her tongue, Kakuro knows he has discovered a hidden treasure.  This is more than a concierge he is looking at.  No, he does not respect her more for the books she has read, but for the lucidity of her insights.

It’s all about seeking beauty in the mundane.

… like viewing a Vermeer in the hustle and bustle of the city, or listening to Bach in the subway, or watching films that evoke flashes of transcendence…. yes, we’ve all experienced those moments.

Kakuro shares with Renée the ability to notice Art in the most ordinary of life.  What does she see in Ozu’s film The Munekata Sisters?  The camellia on the moss.

True novelty is that which does not grow old, despite the passage of time.”

The camellia against the moss of the temple, the violet hues of the Kyoto mountains, a blue procelain cup — this sudden flowering of pure beauty at the heart of ephemeral passion: is this not something we all aspire to?

It’s all about beholding eternity in the temporal.

And what beauty, what fate, it is to find someone who has named his cats Kitty and Levin, from Anna Karenina, while yours is Leo, someone who appreciates the meaning behind 17th C. Dutch still-life, someone who seeks the authentic human face behind the façade of social norms… someone whose toilet, even, exuberates with Mozart’s Confutati?

And oh… what an experience in that bathroom at Kakuro’s suite.  Kudos to Alison Anderson, I’ve totally forgotten that I’m reading a translation.  Just one of the rare cases that shows humor can be translated.  And that night, how gratifying for Renée to find so much inspiration in a Dutch painting, a sliding door, a bowl of ramen noodles…

What congruence links a Claesz, a Raphael, a Rubens, and a Hopper?

And 12 year-old Paloma, with her quest for meaning and authenticity, is soon confronted with something much more engrossing than she had started out to seek…

At times LOL funny, at times, absorbingly heart-breaking.  This is one of the rare occasions where I had tears welled up in my eyes as I came to the end, an ending so powerful it propelled me to start from the beginning again.

The Elegance of the Hedgehog by Muriel Barbery, translated by Alison Anderson, translation published by Europa Editions, 2008, 325 pages.

If there are no universals, why would we experience such delight when someone else shares our joy in discovering that same beauty?  Why would we seek beauty in the first place?

27 thoughts on “The Elegance of the Hedgehog”