Clint turns 80 today.  A book dedicated to him as well as a special DVD just out to celebrate his life-long achievement.  There’s no shortage of Father’s Day gift ideas.  I understand though the man himself does not want any celebration on his birthday.  So to make his day, I’m not going to say anything more about him.

But there’s another birthday, or anniversary rather, that should be mentioned.  To Kill A Mockingbird turns 50 this year. Another good choice for Father’s Day, or any day really, and not just for fathers.  In recent years, as I see current events unfold, I truly feel this will make a marvellous gift for Law School graduates, or any graduate for that matter.   In this tumultuous time we’re in, where honor, justice, and nobility of character seem to become obsolete as quickly as the latest techno gadget, we all need a guidepost, a moral compass, ever more so.

To commemorate the 50th anniversary of its publication, Harper Collins has published a special edition:

Harper Lee had based the story on her childhood experiences in her hometown Monroeville, Alabama.  Her understated storytelling of Atticus Finch, Scout and Jem of Maycomb had won readers’ hearts the world over.   Two children growing up learning the value of respect and justice, love and integrity from their father.  Theirs was a most trying of times when racism and the Depression joined hands to destroy any fragile decency still present in a poverty-stricken town in the deep south.

Strangely, the story of such a parochial setting had triggered universal resonance.  The novel has been translated into at least 40 languages, sold over 30 million copies.  It has gained the number one spot on the list of greatest novels of all time.  It is the choice of British librarians according to a poll conducted by the Museum, Libraries and Archives Council (MLA), in which librarians around UK were asked the question, “Which book should every adult read before they die?”  Just hope people don’t wait till then.

To complement the book, I highly recommend the DVD set of the Oscar-winning movie (1962).  Make sure it’s the Universal Legacy Series (2005).  This is a two-disc collection with loads of memorable special features. Here’s a list:

“All the children of the whole world must have wished they could have Gregory Peck as their father.  He was ours, and that was our blessing.  He really was a lot like Atticus Finch… The last page of his film script of To Kill A Mockingbird, he had scrawled these four words at the bottom: Fairness, Courage, Stubbornness, Love. And they remind me so much of him…”  — Cecilia Peck’s tribute to his father

“It’s difficult to separate the man from the character.”  — Mary Badham (Scout) reminisces on her experience working with Gregory Peck

“Making millions is not the whole ballgame.  Pride of workmanship is worth more, artistry is worth more.  The human imagination is a priceless resource.  The public is ready for the best you can give them.  It just maybe that you can make a buck, and at the same time encourage, foster, and commission work of quality and originality.”  — From Gregory Peck’s acceptance speech for American Film Institute’s Life Achievement Award.

And if you think it’s all about Gregory Peck, well in a way it is.  I can’t think of anyone better to climb into the skin of Atticus and walk around in it.  The man is Atticus Finch, as his colleagues and family had testified. Gregory Peck received a well-deserved Best Actor Oscar for his role.  I must mention too that this is where Robert Duvall made his acting debut, without saying one single word, as Boo Radley.

The other good reason for this Legacy Series is the 11 Exclusive Reproductions of Original Theatrical Posters. They are printed in a handsome set of cards, each a tribute from the country it comes from: Australia, Belgium, Italy, Japan, Argentina…

And last but never the least, a note from Harper Lee herself about the actor playing a character that was a cinematic reflection of her own father. 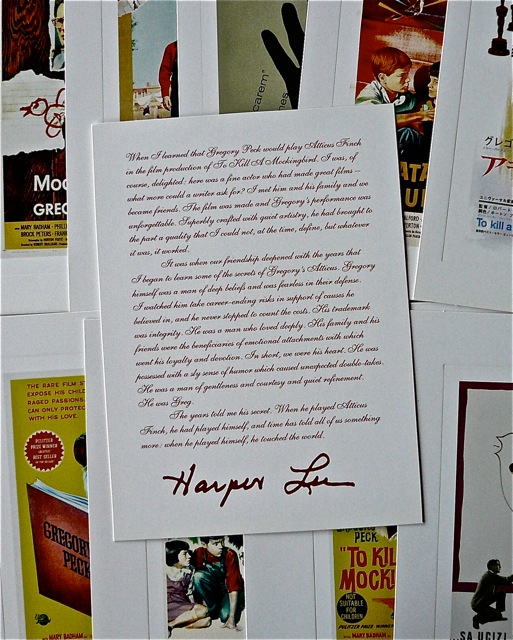 8 thoughts on “To Kill A Mockingbird”