It was pure serendipity that I’d picked a hotel right in The Latin Quarter.  At the time of my booking I wasn’t aware of so culturally rich a Parisian sector I’d be staying, and with many attractions on my list within walking distance.   The Latin Quarter derived its name from the fact that Latin was widely spoken in the area during Medieval time.  This has been the academic and literary part of Paris, and remains so today. Bookstores are everywhere, almost all in French though, many specializing in philosophy.

Our hotel is situated right across from the Sorbonne, Universite de Paris.  Unfortunately it was closed during the summer months, the guard at the gate making sure people stay out, so I did not get a chance to go inside or browse in their bookstore.

The Panthéon is also located in The Latin Quarter, about a 15 minutes walk from where we stayed.  It is the burial site of several renowned intellectual and literary figures of France, including Voltaire, Rousseau, Hugo, Zola, Pierre and Marie Curie:

Not just as a memorial ground, the Latin Quarter is a vibrant sector where writers, intellectuals and academics congregate, meet each other to engage in discourses over coffee or a glass of wine. Here is a restaurant where Camus and Sartre were among its prominent patrons, now a tourist point of interest on the map, Le Brasserie Balzar: 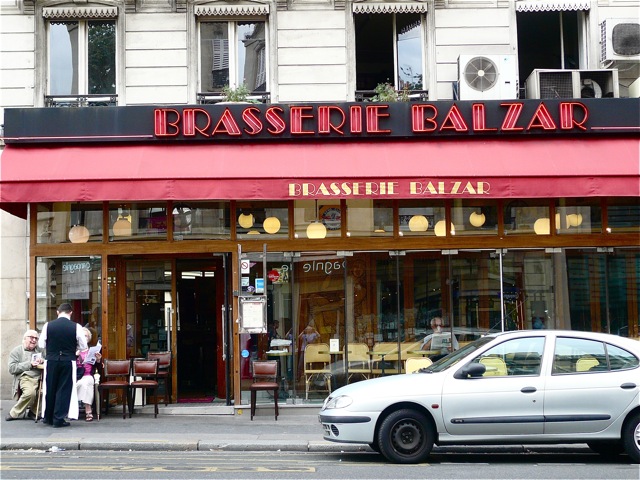 Heading down rue St. Jacques from Balzar, I walked towards the River Seine.  I could see from afar the Notre Dame:

But I wasn’t going to make my way across just yet, for I’ve found the number one item on my must-see list situated on this side of the Seine, the Left Bank, and that was the legendary bookstore-library, Shakespeare and Company:

On November 17, 1919, American expatriate Sylvia Beach opened the English language bookstore-library in Paris, and turned the page in literary history.  Beach was not merely a bookseller, but a multi-faceted literary personality, a writer and a subject for other writers, the publisher of James Joyce’s Ulysses in 1922, the proprietor of a literary hub that welcomed expatriate writers to mingle, read, write and stay.  In one of her many literary parties she introduced F. Scott Fitzgerald to James Joyce, the former was too intimidated to approach Joyce himself.   Many icons of the ‘Lost Generation’ had been affiliated with the literary hang-out, including Hemingway, Gertrude Stein, Ezra Pound, to name a few.  Click here for a historic photo of Beach and Joyce in front of Shakespeare and Company.

Hemingway and some of the ‘Lost Generation’ found on the walls of the bookstore: 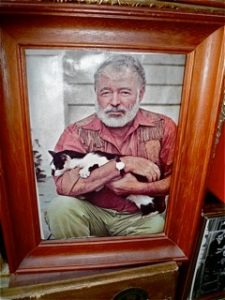 Closed down during WWII, the new owner George Whitman, another American expat and a friend of Beach’s,  re-opened its doors in 1951 in the present location on the Left Bank of the Seine.   Now in his 90’s, Whitman has stood by his commitment not to sell his little bookstore to developers, and kept the tradition alive: a sanctuary for writers.  For almost 60 years now, Whitman, himself a writer and a poet, has offered lodging and writing opportunities to countless aspiring souls.  The bookstore is now run by daughter Sylvia Beach Whitman.  According to its website, Shakespeare and Company has served more than 50,000 heads on the pillows of its 13 bed facilities for free, accommodating such literary figures as Henry Miller, Anais Nin, Lawrence Durrell, and Alan Ginsberg.  Click here for a personal account of what it’s like staying at Shakespeare and Company, and some house rules.

A mementos from Lawrence Durrell:

Upholding the spirit of hospitality: 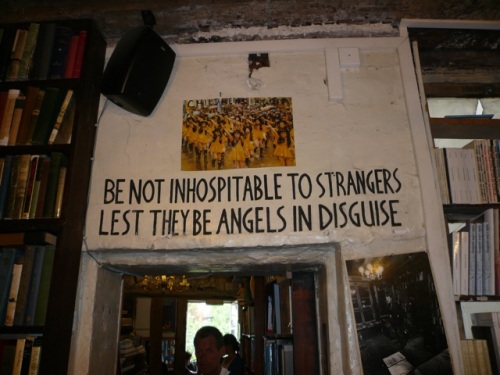 Typewriter for use, tradition alive and well:

Just last week, even the editor of the New York Times has declared the inevitable, that the print version of the New York Times will end some time in the future. Under the sweeping torrents of eBooks and ePublishing, seems like independent bookstores are fighting an uphill, if not a losing, battle.  I wish the Whitman family well in standing strong against the tide.  From a little bookshop-library, it has stayed true to its tradition, and by so doing, gained a spot on the historic map of Paris.  In 2006, Whitman was honoured by the French Minister of Culture with the Order of Arts and Letters. More than just a point of interest for tourists, Shakespeare and Company has now become a cultural institution that just, hopefully, might not be so easily demolished to make way for new development along the Seine.

All Photos Taken By Arti of Ripple Effects, August 2010.  ALL RIGHTS RESERVED.

6 thoughts on “Paris: The Latin Quarter”