To read my book review of The Elegance of the Hedgehog, CLICK HERE.

I’m sure it must be a major challenge to turn Muriel Barbery’s The Elegance of the Hedgehog into a movie.  I admire director/screenwriter Mona Achache’s courage.  She has taken up a tall order to make her full feature directorial debut.  How do you deal with all the ubiquitous internal dialogues, philosophical ruminations, literary allusions, and turn the story that takes place inside a Paris apartment into a full length film, holding viewers’ attention for 100 minutes?  Overall, Achache has done well on a formidable task… including building the set, the whole luxury apartment façade from scratch, from the workable old-style elevator to the cast iron gate in the front entrance.

But, maybe that’s the easy part. 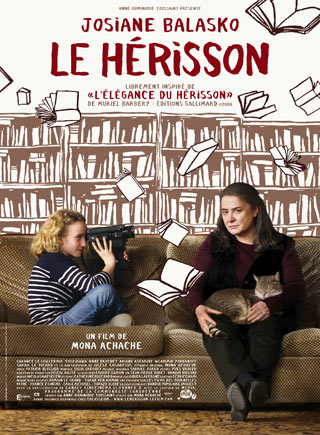 In the film, we look at things from 11 years-old Paloma’s point of view, for she is constantly video-taping the people and the happenings both in her own suite and those in her apartment building.  She intends to produce some sort of a visual philosophical treatise, her legacy, as she plans to take her own life on her 12th birthday.  This is a clever alteration, shooting video instead of writing a journal, for the visual effects.   We see a very intelligent girl (Garance le Guillermic), having concluded that life is utterly absurd, decides not to spend her life in a fishbowl as everyone else. With her artistic talents, Paloma has used her drawings as a kind of personal record-keeping; from her point of view, some delightful animations are added to enhance the appeal of the film. Paloma is an interesting and amiable character that ironically brightens up the film with some humorous deadpan takes.

The movie is an abridged and simplified version of the book, that is expected.  But while it has some stylish manoeuvring in presenting the story, I’m disappointed that the crux of the premise has not been focused upon. My major concern then, must turn to the other character.  The main speaker of the book is Madame Michel, Renée, the 54 year-old autodidact, the concierge of the luxury apartment.  Yes, we see her outward appearance following exactly what the book has described:

I am a widow, I am short, ugly, and plump… I live alone with my cat, a big, lazy tom… neither he nor I make any effort to take part in the social doings of our respective species.  Because I am rarely friendly–though always polite–I am not liked, but am tolerated nonetheless…

Well, maybe not the ‘ugly’ part.  But yes, we see the Hedgehog alright, but what about its elegance?

Josiane Balasko has put on a meticulous performance as Madame Michel, a bit too much even, for her grumpy persona has hidden all humor the character could have diffused, as the book has rendered.  But other than the faithful characterization on the surface, it is more important that the inner world, the clandestine and ignored persona of Renée be depicted.  What makes the book so appealing is Renée’s inner quest, not only for intellectual ideals (yes we see her reading and her secret library in the film), but her appreciation of art as a form of transcendence, her search for beauty in the mundane, her ability to seize the moment of permanence in the temporal, as Barbery has written: “pure beauty at the heart of ephemeral passion”.  It is such wisdom that Paloma finally realizes, and which changes her mind about suicide.  This crucial theme is not shown in the movie, and I count that as a major deficit, despite the conscientious effort in following the outward details of the book.

Director Achache, who has also written the screenplay, chooses to replace these gratifying thoughts with the cliché statement of  “It’s what you’re doing the moment you die that’s important.”  Well, ok… maybe she’d like to write a book with that premise, but I’m afraid it might not be the essence of the source material here.

Yes, we still have the new tenant Kakuro Ozu (Togo Igawa), who has wisely looked past the ordinary façade of a socially lower-ranked concierge, and chooses to embark on a romantic journey with his new-found friend.  And yes, we have the chance to see his newly renovated Japanese suite, even his Mozart-playing toilet, as well as an excerpt from the Japanese director Ozu‘s The Munekata Sisters. Achache has followed the particulars faithfully. I wish she had had explored the essence, transporting her viewers from the mundane to a transcendent plane, albeit just momentarily.

I must add though, the music has come through most effectively.  Thanks to Gabriel Yared, whatever that is missing has been displayed musically by the meditative tunes and the longing voice of the cello.  The Oscar winning composer has created such memorable scores for The English Patient (1996), which won him an Oscar, and nominations for Cold Mountain (2003), and The Talented Mr. Rippley (1999).  Here in The Hedgehog, his musical rendering is beauty itself.

The DVD is in French with English subtitles.  Special features include the making of and deleted scenes. Unfortunately, they are all in French with no subtitles.  While watching the luxury apartment building being set up from scratch is interesting,  without subtitles, the comments from the director and actors in the making of featurette cannot be appreciated as they should be.