In December 1994, a small team of cave explorers came upon a cave near the valley of the Ardèche River in southern France. They were awestruck as they went inside. Since named after the team leader Jean-Marie Chauvet, the Chauvet Cave had provided the natural canvas for prehistoric paintings dating back 32,000 years to the Upper Paleolithic period, twice as old as those previously found in Lascaux. These are the earliest paintings ever discovered.

The Chauvet Cave is located near the natural limestone bridge over the Ardèche River, the Pont d’Arc, which has been noted to be half a million years old:

The acclaimed documentary filmmaker Werner Herzog was granted special permission endorsed by the French Ministry of Culture to go into the Chauvet Cave to film the rock paintings in situ. The result is this mesmerizing documentary.

Following a restricted 2-foot wide pathway, and limited only to a film crew of four, with no heat-emitting lights and only hand-held camera, Herzog made a spellbinding document of epic historical significance. A team of archeologist, paleontologist, art historian and geologist formed the quiet, unobtrusive entourage into this pristine trove of treasures. 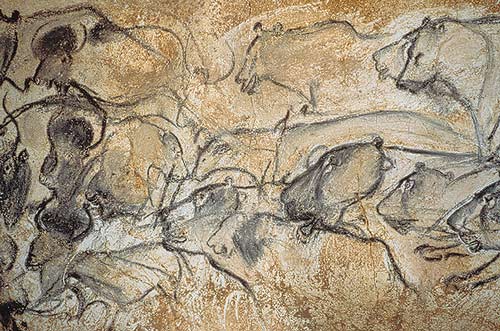 A panther and hyenna surprisingly in friendly mood:

From the film, archeologists and an art historian inform us that a single artist created most of these works. He had a crooked little finger, and his palm prints could be seen from crouching position to a height of 6 ft.  They are now the oldest human handprints:

There are animal fossils but no human remains in the cave, suggesting that it was not used for human dwelling but maybe just for painting. A prehistoric art studio? The artist had utilized the curvatures and ridges of the rocks to create fascinating renderings of animals charged with life and energy.

This is where I’d wholeheartedly endorse the 3D technology. Director Herzog, after some hesitations, decided to use a 3D camera to capture the vivid renderings. With the 3D advantage, we can see how the artist utilized the contours of the rocks to depict the animals in a most realistic way.

In the film, we also see multi-legged bisons, like those in cartoon strips or frames in animated films, suggesting movements.

Many of the animals are depicted in perspectives:

and in layered renderings like this showing lions without manes:

A few of the paintings are dated to some 5,000 years later, about 27,000 to 25,000 ago, indicating another period of artistic activities there. But since that newer date, no human traces were left. The cave had remained untouched until the recent discovery in 1994.

In the vicinity of the cave, remnants of musical instruments are found, evidence of another form of artistic pursuit. In the film, we hear one of the researcher playing the “Star-Spangled Banner” on what looks like a tiny twig with equally-spaced holes. It would be another extraordinary find if we could discover the pop tunes of the day.

Now, a note about watching this film in 3D. I admit as someone with an acute built-in motion sensor, I had to leave the theatre half way through the film when I first saw it in 3D. The roving camera plus the 3D effects had proven to be worse than being tossed at sea.

But I’m fortunate to be given a second chance. The film is now screened in another theatre without the 3D technology. I knew I must see the rest of it, so I returned for a second viewing. And this time, I stayed till the end.

A must-see documentary for all.