To celebrate St. Patrick’s Day, I’d like to post my second selection for the Ireland Reading Challenge 2012, and raise a toast to Oscar Wilde for his LOL funny three-act play The Importance of Being Earnest.

Though written in 1894, Wilde’s work is surprisingly modern. Subtitled “A Trivial Comedy for Serious People”, it is a mashup of mistaken identities, social satire, biting ironies, and one-liners worthy of our late-night talk shows.

You can finish the breezy eighty-some pages in one sitting, but don’t read it in public. You don’t want to be mistaken. To most people, only a lunatic would LOL alone without a bluetooth hanging on his ear.

Jack Worthing is in love with Gwendolen Fairfax of London, cousin of his friend Algernon Moncrieff. But obstacles abound for his courtship. As a country gentleman with many responsibilities, he has to create a wayward younger brother and town-dweller named Earnest as an excuse for him to go out to town for pleasure and to see Gwendolen. While in town, he has taken the name Earnest. Algernon, just the opposite, has to create an invalid Bunbury in the country for him to visit so he can meet and woo Jack’s ward Cecily, while pretending he is Earnest, Jack’s younger brother from London.

Locales may be a hindrance, their major obstacle is Lady Bracknell, Gwendolen’s mother and Algernon’s Aunt, a formidable and feisty gatekeeper of aristocratic matrimony.

With Downton Abbey’s dialogues still ringing in my ears (been re-watching the blu-rays perpetually since its Season 2 Finale on PBS) I can easily imagine the Dowager Countess of Grantham, Violet Crawley, uttering Lady Bracknell’s lines. Screening for Jack’s eligibility as a suitor for her daughter Gwendolen, Lady Bracknell conducts the following interview.

LADY BRACKNELL:  How old are you?

LADY BRACKNELL:  A very good age to be married at. I have always been of opinion that a man who desires to get married should know either everything or nothing. Which do you know?

JACK (after some hesitation):  I know nothing, Lady Bracknell.

LADY BRACKNELL:  I am pleased to hear it. I do not approve of anything that tampers with natural ignorance. Ignorance is like a delicate exotic fruit; touch it and the bloom is gone. The whole theory of modern education is radically unsound. Fortunately in England, at any rate, education produces no effect whatsoever…

LADY BRACKNELL:  Are your parents living?

JACK:  I have lost both my parents.

LADY BRACKNELL:  To lose one parent, Mr. Worthing, may be regarded as a misfortune; to lose both looks like carelessness.

JACK:  The fact is, Lady Bracknell … I don’t actually know who I am by birth. I was … well, I was found.

JACK:  The late Mr. Thomas Cardew, an old gentleman of a very charitable and kindly disposition, found me, and gave me the name of Worthing, because he happened to have a first-class ticket for Worthing in his pocket at the time. Worthing is a seaside resort.

LADY BRACKNELL:  Where did the charitable gentleman who had a first-class ticket for this seaside resort find you?

LADY BRACKNELL:  In what locality did Mr. Thomas Cardew come across this ordinary hand-bag?

JACK:  In the cloak-room at Victoria Station. It was given to him in mistake for his own.

LADY BRACKNELL:  The line is immaterial. Mr. Worhting. I confess I feel somewhat bewildered by what you have just told me. To be born in a hand-bag, whether it had handles or not, seems to me to display a contempt for the ordinary decencies of family life…

And many more lines that would show you Wilde could have made one great Oscar host. 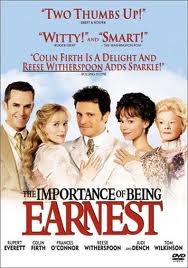 I’ve got the DVD. It never fails to delight no matter how many times I re-watch it. Lady Brecknell is portrayed by Judi Dench, as proficient as any Dench performance, albeit a bit too severe here. But just as well, she’s a monster to Jack Worthing. 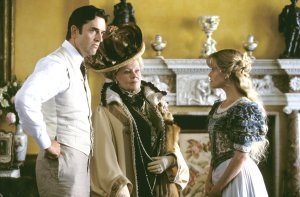 Jack is played by the ever talented Colin Firth. Dispelling the Mr. Darcy myth, Firth shows he can be one freewheeling comedic actor. Having seen many of his works, I find that with the right words to say, he can always deliver in style, even if he needs to stammer to get his words out.

Before Mamma Mia! (2008), Colin Firth had sung in a movie strumming a guitar, it is here. With Rupert Everett as the piano playing Algernon, the two come together in a duet to woo their love.

Frances O’Connor, who plays Fanny Price in Mansfield Park (1999), is Gwendolen, animated but much intimidated by her icily fierce mother Lady Brecknell. Reese Witherspoon is Cecily, Jack’s 18 year-old ward. The gals can easily call each other sisters if not for the mistaken identity of their love interest, Earnest. Thinking they are romantic rivals, the ladies are at each other’s throat as much as their genteel upbringing can allow, and  quickly become allies once the misunderstanding clears up. 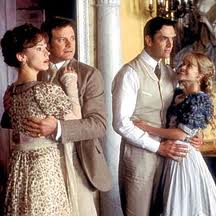 Both Jack and Algernon are willing to go all out to have their names changed to Earnest via christening by the minister Dr. Chasuble, a role mastered easily by veteran actor Tom Wilkinson. Dr. Chasuble is a silent admirer of Cecily’s governess Miss Prism, played by Anna Massey with much comedic sense and timing.

At the end, Jack finds out his true parentage, realizes that he is more kin than kind to Algernon, and three matrimonies ensue, a happy ending Jane Austen would have approved. The movie adaptation is an enjoyable way to go through the play, not just with sight, sound and cinematic fun, but a delightful all-star cast.

Some tidbits: The film won a Best Costume Design award from Italy, and Reese Witherspoon was a nominee of the Teen Choice Award 2002. Looking at the cast today, we see 3 Oscar winners and 1 Oscar nominee.

As usual, the DVD carries special features like The Making Of and Behind the Scene featurettes, interviews with stars and crew, and audio commentary, always a valuable companion to the main feature.

15 thoughts on “The Importance of Being Earnest by Oscar Wilde”