SEASON 6 FINALE: Goodbye to All That

‘You can’t do very much as an actress unless you have the proper words to say…’ — Penelope Wilton, Isobel Crawley

Four weeks have passed since Downton Abbey Season 2 Finale aired on PBS. How are you holding up? To alleviate Downton Abbey withdrawal symptoms, I’ve been in a perpetual state of re-watching all the episodes from Season 1 and 2. Downton Abbey on Blu-ray is absolutely beautiful.

This Golden Globe, Emmy, and BAFTA award-winning miniseries has many appeals. For me, apart from the sumptuous setting, attention to details, great acting, and inspiring cinematography, the main attraction is the writing. Julian Fellowes’ script gives us intelligent dialogues reminiscent of Oscar Wilde’s wit and satire.

I have compiled a list of quotes from both Seasons. Lucky for 78 year-old Maggie Smith, she gets the best lines as Violet Crawley, Dowager Countess of Grantham.

Here they are in chronological order so you can reprise the scene. Enjoy!

“Every mountain is unclimbable until someone climbs it. So every ship is unsinkable until it sinks.” — Lord Grantham, S1E1

“We are allies, my dear, which can be a good deal more effective.” Violet Crawley, Dowager Countess of Grantham, in reply to Cora Crawley’s “Are we to be friends, then?” S1E1 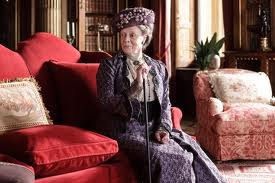 “Are you afraid someone will think you’re American if you speak openly?” — Lord Grantham to Dowager Countess, S1E3

“But nobody learns anything from a governess, apart from French and how to curtsey.” Lady Sybil, S1E4

“No one ever warns you about bringing up daughters. You think it’s going to be like Little Women. Instead they’re at each other’s throats from dawn till dusk.” — Cora Crawley,  Countess of Grantham, S1E5

“Mary can be such a child. She thinks that if you put a toy down, it’ll still be sitting there when you want to play with it again.” — Lord Grantham, S1E5

“If she won’t say yes when he might be poor, he won’t want her when he will be rich.” — Violet Crawley, Dowager Countess, S1E7
.
“First electricity, now telephones. Sometimes I feel as if I were living in an H.G. Wells novel.”  — Violet Crawley, S1E7
*****
Season 2

Matthew Crawley in the trench

“I’m not a romantic… But even I concede that the heart does not exist solely for the purpose of pumping blood.” Violet Crawley, S2E2

“Are you like everyone else in thinking that because she’s a countess she has acquired universal knowledge by divine intervention?” Isobel Crawley to Dr. Clarkson re. Cora, Countess of Grantham, S2E4  (And you can substitute the word ‘countess’ with any word you need when quoting it.)

“Sir Richard, life is a game in which the player must appear ridiculous.” Violet Crawley, Last Episode, Christmas at Downton Abbey.

“I want a good man for you, a brave man. Find a cowboy in the Middle West and bring him back to shake us up a bit.” Robert Crawley to daughter Mary. Last Episode, Christmas at Downton Abbey.

“1920. Is it to be believed? I feel as old as Methuselah.” Violet Crawley, Last Episode, Christmas at Downton Abbey.

Lady Almina and the real Downton Abbey: Facts that Give Rise to Fiction