Don’t be misled by the cover design. This audiobook is not related to the 2008 movie adaptation. Rather, it’s an unabridged recording of Evelyn Waugh’s novel, engagingly read by Jeremy Irons, who plays the narrator Charles Ryder in the 1981 award-winning British TV series.

Jeremy Irons exemplifies what an ideal audio performance should be like. We look for the visuals in a movie; we are drawn to the voice in an audiobook.

For one who has had his share of youthful desires, tasted love and loss, and known the ambivalent effect family and religion can bring, now twenty years after, Charles Ryder is resigned to a numb and dreamless existence. Irons delivers such a tone perfectly… his deep, quiet and sombre voice an apt reflection of Ryder’s sentiments.

His voice dramatizes the various characters with clarity. As a listener, I can easily tell who’s talking, as simple as that. From the senior Lord Marchmain to 12 year-old Cordelia, from the stuttering Anthony Blanche to the constantly drunk Sebastian Flyte, Irons’ portrayal is natural and apt. Characterization is consistent in their manner of speech, quirks and eccentricities. Further, he has also effectively conveyed the subtext, the undercurrents in the dialogues, for example, the sardonic remarks Edward Ryder often hurls at his son.

On top of all these, Irons has presented Waugh’s beautiful language and descriptions with poetic eloquence. His articulation stops me time and again to rewind so I can listen and savor the language once more.

Here is the excerpt that seized me from the start and sent me to find the passage in the book to recap every word. This is in the Prologue when Charles unknowingly arrives Brideshead in his army duty twenty years later and asks his subordinate where they are. This is the moment when he is told the name of the place:

He told me and, on the instant, it was as though someone had switched off the wireless, and a voice that had been bawling in my ears, incessantly, fatuously, for days beyond number, had been suddenly cut short; an immense silence followed, empty at first, but gradually, as my outraged sense regained authority, full of a multitude of sweet and natural and long forgotten sounds: for he had spoken a name that was so familiar to me, a conjuror’s name of such ancient power, that, at its mere sound, the phantoms of those haunted late years began to take flight.

I know it’s a bit long, but I must include it here, for this is the passage that has drawn me to the written word, all because of the voice reading it. Can this be the measure of a good audiobook?

Thanks to Devourer of Books for hosting Audioweek 2012. 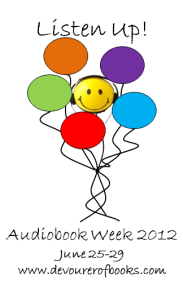 Other related posts on Ripple Effects: