CLICK HERE to read my Movie Review of Midnight’s Children

Finally, we’ve come to the last section, the most eventful and catastrophic in our protagonist Saleem Sinai’s life. I must admit, my enthusiasm sagged a little at the end of Book Two, through no faults of Mr. Rushdie’s. Book Three sent me to some major Googling to be informed. After reading what I found on the Internet, I was fully awake. 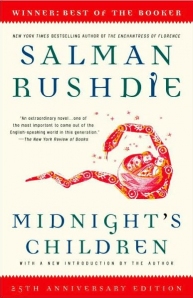 The tumultuous waves of history swept Saleem along like an open dinghy. The 1965 Indo-Pakistani War over Kashmir ‘wiped out’ his family in a bomb blast. Saleem was ‘wiped clean’ with no memories of his own identity. He subsequently joined an intelligence gathering unit in the Pakistani military, his super sensitive nose being the major asset. In 1971, another war awaited him as he headed from West Pakistan into East to counter the revolutionary Mukti Bahini in their fight for an independent Bangladesh.

Perhaps fate had a gentler hand than humans. Saleem, now ‘buddha’ as he was ‘purified’ of all his past, got lost in the Sundarbans jungle. For seven months, he escaped the war between the two Pakistans. When he reemerged he witnessed atrocities done by his own Pakistan army he could not believe. Ten million refugees from East Pakistan walked across the border into India. As a result, the mightier Indian army led by Sam Manekshaw intervened and soon ended the war, with Pakistan’s Tiger Niazi surrendering with his 93,000 men. Buddha shed his uniform and became a deserter in Dacca, independent Bangladesh.

Tossed amidst the raging sea of national and personal upheavals, our protagonist, though a drop in a sea of six hundred millions, felt the burden of history and came to a self-realization. Rushdie’s description is powerful:

Who what am I? My answer: I am the sum total of everything that went before me, of all I have been seen done, of everything done-to-me… I repeat for the last time: to understand me, you’ll have to swallow a world.

With the Bangladesh Independence victory parade came a band of magicians from India, among them was Parvati-the-witch, one of the Midnight’s Children. Seeing Saleem again and calling his name out loud in excitement, Parvati cured his amnesia. She smuggled him in her basket back to India. Subsequently, Saleem stayed with Parvati and the magicians in the slum of Delhi. The silver spittoon he carries all these years is a perfect metaphor of his life… once born with a silver spoon in his mouth as a changeling, Saleem now comes back to where he would have been if he had not been switched at birth, the spittoon.

Saleem met his changeling rival, Major Shiva now. A loyal supporter of PM Indira Gandhi, Shiva had risen as Saleem fell. A national hero and a womanizer, Shiva went to the magician ghetto and took Parvita away. Months later she was sent back to the slum when he learned that she was pregnant. At the end, it was Saleem who married Parvita, knowing that she would give birth to Shiva’s son.

Baby Aadam Sinai was born at midnight, June 25, 1975, on the brink of Indira Gandhi’s Emergency measure in gripping absolute power, another fateful night of the nation’s history. But Saleem knows his son who is not his son will have a different path:

Aadam was a member of a second generation of magical children who would grow up far tougher than the first, not looking at their fate in prophecy or the stars, but forging it in the implacable furnaces of their wills.

With Shiva as the biological father, baby Aadam once again flowed back to the blood line of his grandfather Ahmed Sinai, the offspring of a changeling comes full circle back to his rightful lineage.

Indira Gandhi’s son Sanjay conducted an anti-poverty operation to eradicate the slums. Parvati was killed in the clean-up. After her death, Saleem had a chance to go back to his birth city Bombay with his son. There he reunited with Mary Pereira. She was now Mrs. Braganza, manager of a pickle factory. Her changeling crime forgiven, Saleem now worked in her factory, paralleled his work as a writer preserving history:

… in words and pickles, I have immortalized my memories, although distortions are inevitable in both methods. We must live, I’m afraid, with the shadows of imperfection.

Is an author liable for what he writes in a work of fiction? The line delineating reality and fiction in Midnight’s Children is often blurry. Do Saleem’s views parallel Rushdie’s? Like Saleem telling his life story to Padma, Rushdie in Midnight’s Children could well have gone all out to unleash his sentiments towards the historical progression and political turmoil of India, the Partition, Pakistan and later Bangladesh.

In Book Three, Rushdie was particularly critical of the suspension of civil rights, censorship of the press and arrests of subversive elements during the Emergency as Indira Gandhi seized absolute power. But it was for a more personal description, a single sentence about Indira in this section of the book that brought Rushdie a defamation suit in 1984 by Mrs. Gandhi when she was PM again. In context, the sentence is Saleem’s account, but has to be removed from publication after that year. Rushdie mentions it in his introduction to the 25th Anniversary edition.*  The author still has the last word.

Midnight’s Children is an epic chronicle that carries multi-layered meaning and parallels, a feast of stylistic literary offerings. As an outsider, I feel I have only scratched the surface. But with just this outer core, I’ve been much entertained and informed. I will be back for more.

A note of appreciation to Mrs. B of The Literary Stew who planted the seed of this read-along, and Bellezza of Dolce Bellezza who supported the start-up. My hearty thanks to all who have shown interest, participated at one time or another exchanging thoughts and insights in your reviews and comments, as well as those who are silent readers. All your contributions have made this four-month endeavour gratifying and worthwhile.

To read my reviews of previous sections of Midnight’s Children, please click the links on the sidebar.

We must do this again some other time. Book suggestions?

Midnight’s Children is one of my most anticipated films for 2012. Here are the actors playing young (Darsheel Safary) and adult Saleem Sinai (Satya Bhabha): 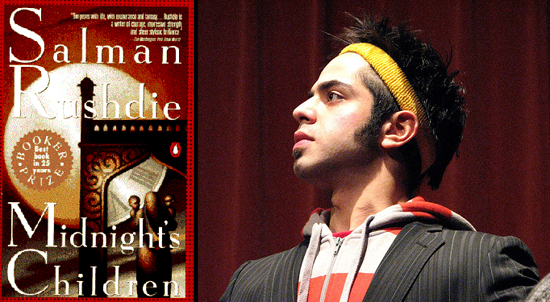 Here’s @SalmanRushdie’s Tweet regarding the release dates of the film: ‘Canada, October 26th; UK, November 9th; USA, being finalized, should be around the same time.’