It is a good sequence, Anna Karenina read-along then the movie after. Screenwriter Tom Stoppard wrote as if his viewers already knew the story well, or have seen other film versions, for here, we are watching a highly stylized adaptation of Tolstoy’s epic novel, and it seems that it is a case of style over story. 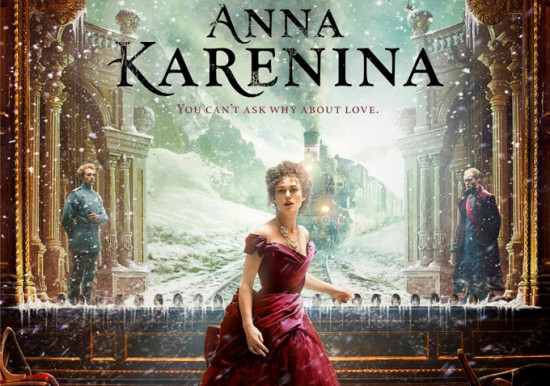 Joe Wright’s (Atonement, Pride and Prejudice) version is a bold and therefore risky direction. Instead of a realistic rendering of Tolstoy’s epic, Wright offers us a new portal into the story of Anna Karenina. All the world’s a stage, and if anything, the highly reverberated gossip of Petersburg, the adulterous affair of Anna, wife of the respected government official Alexei Karenin with Count Vronsky is aptly rendered a spectacle. Wright’s innovative concept is an interesting take, weaving his characters between the front and the backstage and into the ‘real’ set.

The idea is brilliant, the permeability of actors in and out of limelight, mingling between their own realities, and the idea that all the world’s a stage, one is both an actor and a spectator.

However, the major premise of the cinema is make-believe. It is the ‘realness’, the believability of the characters and their predicaments that arouse our empathy. That happens when we emotionally immerse into the film. As a result, we care for the characters, even though we may not identify with them.

But here while watching this film, I experience a kind of cognitive dissonance. With its setting in the theatre, at the front and backstage, it is like a kind of deconstruction if you will, for we see that these are merely actors acting, and not ‘real’. So as a viewer, I’m just like a fly on the wall, observing how a theatrical production is done. As a result, I find myself detached and aloof.

A consequence of the highly stylized gestures and movements is that they lead to overacting. And with that, believability is compromised. Now, by genre this is not a musical, so, when seeing characters walk like they’re dancing or their actions performed in unison, like the public servants rubber-stamping paper works, the effect is comical. Well, it might be the intended effect, but one that sticks out in a contrived way. The harvesting scene with the workers swinging their scythe at the same time (do they actually do that in real life, for morale?) is another example, makes me think of how natural the harvesting scenes are in Terrence Malick’s Days of Heaven.

For some reasons, far from Anna Karenina, I have Stanley Kubrick’s A Clockwork Orange in my mind as an example of a successful stylized and yet captivating film.

Nevertheless, there are many admirable elements in the film. First the sumptuous set design and costumes. The continuous camera work from scene to scene is interesting to watch. But after a while, I feel like I need a breather. Thanks to the external shots, albeit few and far between, I can get a gulp of fresh air.

And I must mention a couple of impressive scenes. First is at the beginning, the opening ball where Kitty sees Anna dancing with Vronsky. That scene is well done in its dramatic effects. I can see the actors’ inner turmoils exposed believably, and for a rare moment, Anna’s conscience at work.

As for the casting, I’m afraid it looks like there is a bit of a miscast for one. Aaron Taylor-Johnson is believable as a young John Lennon in Nowhere Boy, but here in his blond curls and starched white uniform, he looks more like a truant school boy than the military rising star Vronsky.

Keira Knightly’s poise and costume give an apt portrayal of Anna. But sometimes her facial expressions make her look like a rebellious teenager, fighting house rules and ennui.

The one role I enjoy most is Matthew MacFadyen’s Oblonsky. My opinion might differ with many. I think he is a much more convincing Oblonsky here than Mr. Darcy in Pride and Prejudice (2005), another Wright’s production. Jude Law’s character is also well-portrayed as Anna’s restrained husband Karenin the government bureaucrat.

Good to see two of Downton Abbey’s actors in the film, Michelle Dockery (Mary Crawley) as Princess Myagkaya and for a brief minute Thomas Howes (Footman William) as Yashvin.

While the love affair between Anna and Vronsky leaves me quite detached, I do see love in others. I see it in Levin’s (Domhnall Gleeson) quiet yearning for Kitty (Alicia Vikander). I see it too in Kitty’s selfless caring for Levin’s ailing brother Nikolai (David Wilmot), and at the end I see it in Anna’s son Serhoza’s (Oskar McNamara) endearing concern for his toddler half-sister, and I see it in his father Karenin’s slight contented smile looking at his son care for Anna’s child with Vronsky.

And with that scene the film ends. All in all, the production is a brave new look at an old story. It can well lead to more readers trying to discover all the left-out conversations and story lines. And so be it, a worthy attempt to turn viewers back to the book.

CLICK HERE to read my posts of Anna Karenina read-along.