Movies this fall is a bumper crop of film adaptations from literary sources. Two belong to the same genre of magic realism. While Midnight’s Children is more akin to realism, Life of Pi is pure magic.

Ang Lee has done it, filming what is considered the ‘unfilmable’. Canadian author Yann Martel’s Booker Prize winning novel Life of Pi is an existential fantasy, a story that challenges the limitations of human reasoning and opens the door to the imaginary and the quest for the Transcendent. What Martel has succeeded in literary form, Lee has realized in this visually stunning cinematic offering.

While I know book and film are two very different art forms, I am glad that screenwriter David Magee has stayed true to the spirit of the novel, which I think is crucial in this case. Cinematographer Claudio Miranda’s creative camera work is also essential in turning Martel’s imaginary world into mesmerizing visuals on screen.

The difficulties are not just transposing the philosophical ruminations from book to screen, but to keep the audience’s attention and interest for two hours when the bulk of the story is about a 16 year-old boy adrift at sea for 227 days in a lifeboat with a Bengal tiger. Kudos to Lee for taking up this daunting task, a project of which several other directors had bowed out, including Jean-Pierre Jeunet (Amélie), M. Night Shyamalan (The Sixth Sense), and Alfonso Cuaron (Harry Potter and the Prisoner of Azkaban).

The production has taken Lee years to complete. He had to build the world’s largest self-generating water tank of its kind in Taiwan to shoot his film, utilize 3D technology and CGI to overcome many obstacles, do extensive research, and above all, find an actor who is capable to be Pi. 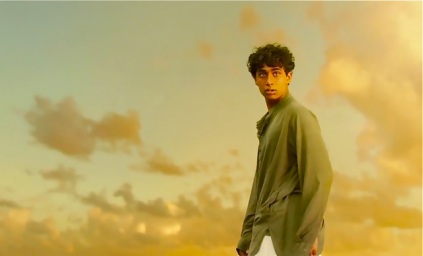 Ultimately Lee found 17 year-old Suraj Sharma in Delhi, India, from 3,000 candidates. Fate has it that Sharma was just accompanying his younger brother to the audition. The next set of challenges for Lee soon follows: directing Sharma who has never acted before, and, coaching him to imagine there is a fierce tiger present at the scenes, for Richard Parker is a virtual reality.

As I watched the film, I could see Lee’s own tenacity reflected in the character of Pi. In fact, the whole process of the production parallels the thematic significance of the story: the essence of reality, the nature of storytelling, the role of the imagination and faith in survival and in life.

The film begins with Pi as a boy (Gautam Belur at 5, Ayush Tandom at 12) growing up in Pondicherry, India. His father (Adil Hussain, English Vinglish) owns the Pondicherry Zoo. The most impressionable lesson he learns from his father is, the tiger is not his friend.

Pi has a loving mother (Tabu, The Namesake), and an older brother Ravi (Ayan Khan 7, Mohd Abbas Khaleeli 14, Vibish Sivakumar 19), a typical older sibling who teases and dares. This first act of family life is a delight, and the 3D effect in the opening sequence is wonderful to watch. The original score composed by Mychael Danna matches well with the exotic context.

We soon realize the story we are watching actually is the adult Pi (Irrfan Khan, Slumdog Millionaire) telling what had happened to him as a boy to a Canadian writer (Rafe Spall, A Room With A View), a story, Pi claims, that will make him believe in God.

Pi is short for Piscine. After the boy is constantly teased by his schoolmates with the pun of the name, he begins to introduce himself as Pi. He just might not have known how prophetic his name is. Precocious and earnest by nature, Pi embraces Hinduism, Christianity and Islam in his search for the divine. The value of Pi, the mathematical symbol, is 3.14, a number that goes on to infinity, which aptly reflects the boy’s heart for the Eternal.

When he is 16 (Suraj Sharma), Pi’s family emigrates to Canada. They set sail on the Japanese cargo ship Tsimtsum, bringing on board the zoo animals. One stormy night, tragedy strikes. A shipwreck sends Tsimtsum to the bottom of the Pacific Ocean. Pi alone is saved as some sailors throw him overboard onto a lifeboat. 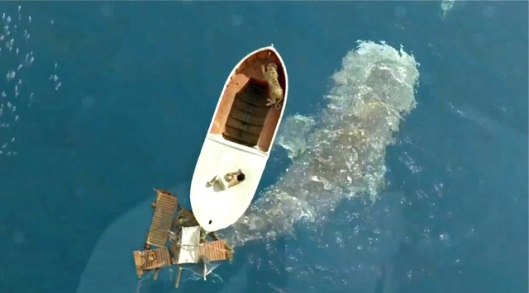 Thus begins the magical journey of life in an open boat. Pi soon finds out he is not alone, for there in the boat is a hyena, a zebra, an orangutan called Orange Juice, and Richard Parker, a Bengal tiger. Soon there remain only two survivors, a 16 year-old Indian boy and a hungry tiger.

Lee demonstrates his technical and directorial prowess in this major second act of the film. He has aptly chosen to use the 3D camera. I’m not a fan of 3D, nor animal movies, but Lee’s usage of it makes what could have been an uneventful drifting at sea into an extraordinary movie experience.

What I read in the book jump out alive in magnificent visuals: the squall of flying fish, the gigantic whale shooting up from the ocean deep, the cosmic showcase of thunder and lightning, and the island overrun by meerkats. Magical realism in 3D, pure cinematic fantasy.

Lee’s style is minimalist: a life boat, a makeshift raft, a boy, a tiger, the open sea. Its simplicity exudes immense beauty; its stillness evokes quiet ruminations. This is not just a castaway, survival story. It depicts a close encounter of a soul experiencing nature and its maker. It also portrays an unlikely companionship between a boy and a tiger. Despite the loss of his family and the perils thrown at him, Pi clings to life with bare faith and the companionship he finds in Richard Parker.

The last part comes as a twist. Two employees of the ship’s insurance company interview the sole survivor of the shipwreck after Pi is rescued. Upon hearing Pi tell his ordeal, their rationale overrides any acceptance of the improbable. Here we see the thematic elements of fantasy versus reality, faith versus plausibility cleverly laid out. Like Martel’s novel, it poses a question that is open-ended, more for the viewer to resolve than for Pi to prove. A most thought-provoking end to a magical journey.

This review has been published in the Asian American Press print version, Nov. 30, 2012 issue. Online edition here. (Hint: There you’ll find Arti morphing from virtual reality into real life… take whatever is real for you.)

CLICK HERE to read my Book Review of Life of Pi by Yann Martel.

A NOTE ABOUT MOVIE PHOTOS: These images are used according to the Fair Use guidelines for criticism, comment and educational purposes. CLICK HERE for more information. CLICK HERE to read the Report of the Ad Hoc Committee of the Society For Cinema Studies, “Fair Usage Publication of Film Stills” by Kristin Thompson.