It’s been a week since I watched The Book Thief, but the face of Geoffrey Rush still creeps into my mind every now and then. We were talking about famous faces on a previous post. A good actor draws you right into his character without distractions from his previous roles, and here’s a good example. Regardless of Rush’s successful roles in the past, here in The Book Thief, I only see Hans, the nondescript yet loving step-father to Liesel. 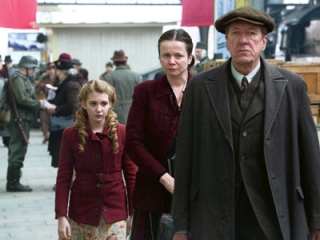 The movie is an adaptation of the popular 2005 YA novel of the same name by Markus Zusak. The book had appeared on the New York Times Bestseller list for 375 weeks. It had since been translated into more than forty languages. Congruent with the age target of the book, this is an appropriate adaptation. It is a PG movie, so we won’t see the violence and horror as intense and explicit as in Schindler’s List.

Before anyone jumps to shoot it down as a ‘sanitized’ version of the Holocaust, let me just say it pertains to the spirit of the novel in quietly depicting life in a small German town under the pressure of Nazi warmongering. It shows a side of the usual WWII movies we seldom see, the ordinary German folks. Zooming in on a street in a small town, it shows the effects of a fierce political regime have on its grass-root citizens: husbands and wives, children, friends, neighbors and acquaintances like the neighborhood tailor or accountant, some of whom suddenly taken away and labelled as the Enemy: Jews.

The focus of the story is on the humanity. No doubt, the majority of the town folks are swayed by and immersed in Nazi ideology, yet there are still a few who stand silently against the ferocious regime, but can do nothing. Even a feeble voice of dissent will send them to conscription regardless of age. That’s what happens to Hans.

As in the book, we have Death as the voice-over narrator, quietly looming over the fictional town Molching, busy at work. Liesel (Sophie Nélisse) arriving at her new home to her adopted parents on Heaven Street. Yes, ironic, since her little brother has died during the trip. The girl soon finds her new home a comfort, and makes a new friend with Rudy (Nico Liersch) next door. Her step-mother is Rosa, played by Emily Watson who reprises her role as in The War Horse as the seemingly tough and bossy wife and overseer of the home. Her husband is Hans, played by Geoffrey Rush with affective charisma, who shows himself from the beginning that he is the emotion powerhouse, the engine that runs the movie.

Directed by Brian Percival (who helms episodes of Downton Abbey), the movie is unabashedly explicit in its emotional channeling. By that, I don’t mean it’s overtly sentimental and melodramatic. The fine line that separates the two may be the word ‘restraint’. Rush and Watson have depicted this quality memorably. He may look oblivious in appearance, but is ever wise and compassionate in spirit; she conversely holds a feisty facade only to hide a tender and caring heart. It is a delight watching them relate to each other. 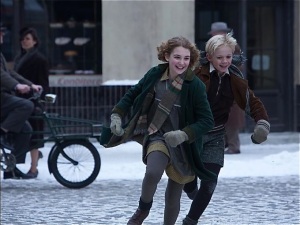 For a YA novel turned into film, the spotlight has to be on the young protagonist Liesel. Sophie Nélisse is a precocious rising star who has won a Genie in the acclaimed French Canadian film Monsieur Lazhar (2011). She has already won a Spotlight Award at the Hollywood Film Festival for The Book Thief. Nico Liersch playing Rudy looks to be a few years too young, but being a good actor, the two loyal friends ultimately shine through as the movie picks up its momentum.

The plot line of hiding the Jewish young man Max, son of Han’s wartime comrade to whom he owes his life, adds texture to the story. Max inspires Liesel to love words even more, igniting that spark in her later to write down her story. To Max, the hiding place is more than a shelter from the storm. It is his connection to the decency and dignity of being human. The snowball fight in his hideout in the basement is one of my favorite scenes.

As for books, reading, and words, looks like they just work as a cover, in both the book and the movie. That Liesel comes as an illiterate ten year-old in Germany may not be quite plausible. The few episodes where she steals a book are incidental, lacking potent effects. The movie nevertheless is persuasive in its subtle way by turning mere book characters into flesh and blood human beings. The Book Thief is about humans. It shows their ugly face that haunts even Death, and their triumphant side that makes Death envious, the power to love, to hope, and to live despite tragedy and loss.

This is not a great film, but one that quietly touches, and subversively moves one to tears. It will not make any major award list, and would likely be dismissed by some critics. But this is the kind of films that, years later, one would discover serendipitously and exclaim, “Why have I missed this little gem?”