November is an eclectic month of reading and viewing for me. I’ve watched films ranging from a Chinese wuxia legend from the Tang Dynasty, to the English suffrage movement, to the scandal in the Catholic Church in Boston… and read books from crime thrillers to Westerns to the Gilded Age to India before and after independence.

Arti is a hybrid after all, constantly navigating between cultures and languages. When it comes to books and films, dashing between genres, periods and styles only adds spice to life.

Here’s the list of my November books and films. 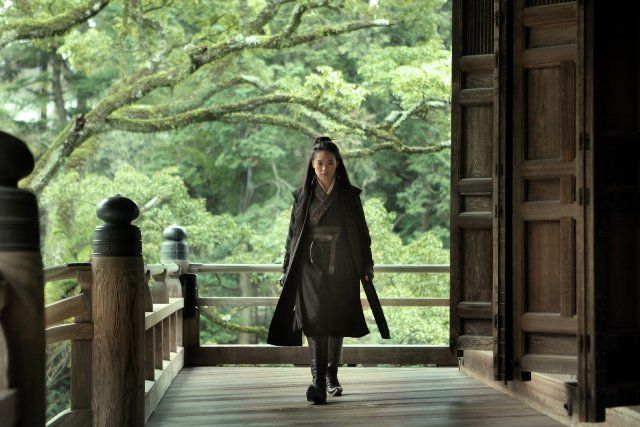 Acclaimed Taiwanese director Hou Hsiao-Hsien’s genre-defying wuxia epic earned him Best Director at Cannes this May. Hailed as the most beautiful film at the Festival, this adaptation of a 9th century Tang Dynasty Chinese legend may not be as easily grasped in terms of its storyline as its visual appeal. The film is recently voted #1 on the reputable Sight and Sound Magazine‘s Best Films of 2015 list, that’s the result of a poll gathering the views of 168 international film critics. It is a rare gem indeed. My full review at Asian American Press.  ~ ~ ~ ~ Ripples

A highly watchable adaptation of Emma Donoghue’s 2010 Booker Prize shortlisted novel. Kudos to the actors Brie Larson as Ma, Jacob Tremblay as 5 yr-old Jack, and yes, to Donoghue herself for writing the screenplay. One of those titles that I’ve enjoyed watching more than the literary source. My review on Ripple Effects.  ~ ~ ~ 1/2 Ripples
Update Jan. 14, 2016: 4 Oscar Nominations including Best Picture

Carey Mulligan has put forth a nuanced performance as the laundry gal turned suffragette in this Sarah Gavron (Brick Lane, 2007) directed historical drama. It’s worthwhile to watch the informative depiction of the actual events woven with fictional personal stories, especially Mulligan’s riveting portrayal of Maud, how her beginning naivety is forged into committed devotion to the suffrage movement. Prolific screenwriter Abi Morgan (Irony Lady, 2011, just to name one of her works) has laid out a fact-based drama with a heart-wrenching climatic scene. The sacrifice these voiceless, working women were willing to lay down is inspiring.
~ ~ ~ 1/2 Ripples

Secret in their Eyes

The Hollywood re-make of Argentine author Eduardo Sacheri’s crime thriller is a tall order, for its previous film adaptation is the Oscar winner of 2009 Best Foreign Language Film. My post on the book, original film, and Hollywood version is here. ~ ~ ~ Ripples

One of the best films I’ve seen this year, detailing the sequences of how the Boston Globe’s ‘Spotlight’ team of investigative journalists uncovered the systemic cover-up of child sexual abuse among Catholic priests. The Pulitzer winning reporting is presented in the film as painstaking procedurals in matter-of-fact dramatizing. For those who may be a bit worried about the subject matter, there is no sensationalized scenes of abuse, and on the part of the reporters, no portrayal of heroism. Such may well be the praise-worthy elements of this production. The cast’s performance is convincing, in particular, Liev Schreiber as the soft-spoken but motivating, no-nonsense editor Marty Baron. Come Awards time, I trust the production, its cast and crew, and director Tom McCarthy (The Visitor, 2007) will be duly recognized.    ~ ~ ~ ~ Ripples
Update Jan. 14, 2016: 6 Oscar Nominations including Best Picture

Fireflies in the Garden

My guess is, you haven’t heard of this 2008 movie. Neither have I until I saw it on TV a few days ago. The story about a father-son’s love-hate relationship from childhood to adulthood is realistically depicted. Caught in between the straining conflicts between the always angry and harsh father and a sensitive, vulnerable son, is the mother, always loving and protecting, something like the family dynamics in Terrence Malick’s The Tree of Life. It also echoes the Oscar winning Ordinary People (1981), the small-scaled, Bergman-esque chamber film of deep entanglement of unresolved parent-child conflicts. Another film just popped into mind and that’s Colin Firth, Jim Broadbent’s When Did You Last See your Father.

Fireflies has a well-selected cast with Ryan Reynolds, Willem Dafoe and Julia Roberts. I’m surprised to see the low rating the film received among critics. Disappointed really that it wasn’t well received. What’s that to me, and why am I  concerned? There’s a half-baked screenplay in my closet that’s something along that line. I know, more rewrites.  ~ ~ ~ Ripples

It’s all a chain reaction started with …

I’ve not missed a single one of Connelly’s Detective Bosch novels. This time I listened to the audiobook and was much impressed by the voice of its narrator Titus Welliver.

So I checked about Welliver’s other audio works, and found Appaloosa by Robert B. Parker. I’d seen the 2008 film adaptation with Ed Harris and Viggo Mortensen and quite enjoyed it. So I jumped right in and found it to be a very well-written book, one of the few Westerns I’ve read.

And from this Robert B. Parker, I went on to explore more about him and learned that he was the ‘Dean of American Crime Fiction’. Here are two of his works crime stories I followed up with:

The Custom of the Country by Edith Wharton
From crime fiction to the Gilded Age. I bought this book at Edith Wharton’s home at The Mount during my New England road trip, during which I learned that Julian Fellowes was much influenced by Wharton and especially this title.

The Secret in their Eyes by Eduardo Sacheri (Audio MP3)

Plato and a Platypus Walk into a Bar: Understanding Philosophy through Jokes by Thomas Cathcart and Daniel Klein (eBook) – click on link to read my one-line review of this title on Goodreads.

The Boston Girl by Anita Diamant
Makes me think of Colm Tóibín’s Brooklyn which I’m rereading to prep for the upcoming film adaptation.

Heat and Dust by Ruth Prawer Jhabvala
Shifting between the English in India before independence and later the 70’s, a clash in cultures and the human toll of unfulfilled marriages. I reread this to prepare for the James Ivory Retrospective this coming weekend right here in my City, with the legendary director (now 87) attending. Yes, really looking forward to this event.

Brooklyn by Colm Tóibín (reread for the upcoming film)

When Did you Last See your Father?

18 thoughts on “November Wrap: East Meets West at the Pond”