A relatively uneventful episode after the convivial Season opening.

But the few storylines are so apt in exposing the characters we thought we’ve known. First off, Mary is a math whiz, her own sister comments that:

“As usual, you add two and two and make fifty-three.”

No need to decode, just Mary in her most inquisitive and intuitive state. Rose may well be pregnant. The more the merrier.

This episode seems to belong to Mary, for she’s everywhere and uh… yes, Agent of all things great and small, from pigs to pregnancy.

And Lord Grantham, heed your mother’s chiding, “if you can’t say anything helpful Robert, please be silent.”

Why, decorate the Servants’ Hall for Mr. Carson and Mrs. Hughes’ wedding reception? I was shocked to hear him say that, same as his daughters. And I thought Robert has turned egalitarian, at least a little bit, as modernity creeps into Downton.

But a butler’s a butler, loyal, honourable, and ever respectful, so Mr. Carson is all gung ho to take up the offer of Downton’s Great Hall. And with Mary’s stepping in to make sure their wedding reception a Downton event, I jump on Mrs. Hughes’s side with no hesitation. A wedding belongs to the bride, no matter how old she is; it’s her day and she ought to be able to choose her own place and plan it in her own way:

“I just don’t want to be a servant on my wedding day.” Of course not.

After all, Mrs. Hughes continues, “we’ll be doing it your way for the next 30 years,” to which Mr. Carson gives no words in reply. What would be the outcome? I wonder. But I can wait, no spoilers please.

Edith’s role as a woman boss isn’t an easy job to tackle, and dealing with an editor like Mr. Skinner sounds like a nightmare. A hint for you, Edith, just imagine: What would Mary do?

So, Mary would enter the Downton pigs in the Fat Stock Show, and will drop by the Drewes’ farm to see the fat piggies. Little George’s first lines “Can we come?” seal the fate of the Drewe family.

Here lies the best storyline of the episode. Mary brings George and Marigold to the Drewes farm to see the pigs while Edith goes to London, and of course, who will be there but Mrs. Drewes? The dramatic effect is much needed for too placid an episode.

And on the day of the Fat Stock Show, Mrs. Drewes’ impulsive act of child snatching is understandable. The only, and too short, tense moment of the hour is finished in five minutes. Too swift a resolution in vacating a family who had farmed there since before Waterloo. An easy case that the wise King Solomon would envy; his was a much harder case of baby sharing.

Talking about the wisdom of King Solomon, his opinion just might be helpful for the prospect of the village hospital and in resolving the family feud. Maybe Violet would listen to his counsel? 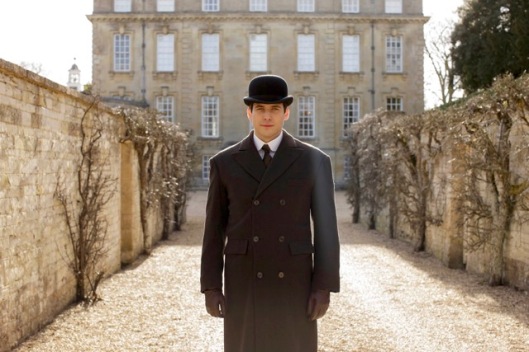 All those country fairs are best to discover new talents and skills. If job hunting plans don’t pan out for Mr. Barrow, he could alway open up a bowling alley. He could well be an adroit operator.

But why did I think of a Magritte painting when I looked at Thomas Barrow in that scene? Hopefully something realistic and not too absurd will cross his path.

As for the Bates, we don’t want to see any more miscarriages, either in the legal or biological realm. And here we have Mary to thank for being so helpful. Bringing Anna to see Dr. Ryder in London’s Harley Street may well be the most effective act of kindness she can offer her maid, more a friend by now.

And what do you know, one year later in 1926 a Lionel Logue opened his speech therapy practice there on that same Harley Street and proved to be a fateful move for the future King of the Empire. (My extra note, not in the Episode)

Of course, Anna glows after the doctor’s appointment. Don’t we all wish Mr. and Mrs. Bates can live happily hereafter?

CLICK on the links to read my other Downton Posts for Season 6:

Downton Abbey rings in the New Year one last time

Type in the Search words to read my other Downton Posts