Jeannette Walls’ memoir had a “seven-year run on the New York Times best-seller list” after it was published in 2005, according to a NYT article . Now, 12 years later, a movie adaptation. So, the long wait is over. The wait, of course, belongs to those who don’t mind seeing a book turned into a movie.

As I’m a proponent of judging book and film as two different art forms on their own merits, I welcome movie adaptations. With this memoir, a non-fiction, I do feel the movie lacks the emotional punch as the first person narrative Jeannette Walls has so masterfully presented in her book. Walls’s memoir is a much livelier, engaging, and poignant piece of account depicting an extraordinary growing-up experience, a nomadic life of poverty until she and her siblings escaped from it.

As I’d mentioned in my review of the book, I was browsing in a bookstore when I picked up The Glass Castle randomly. The opening line captured my attention right away:

I was sitting in a taxi, wondering if I had overdressed for the evening, when I looked out the window and saw Mom rooting through a Dumpster.

That instantly drew me in. And for the rest of the book, Walls has not stopped captivating me with her growing up experience. She candidly shares how alcohol had ruined the potentials of her dreamer dad Rex, who had always dreamed of building them a glass castle. She tells us how her artistic mom Rose Mary had coped (or not), and the effects of their unconventional ‘parenting style’ had on the four children. Eventually, starting with the eldest, Lori, the children one by one escaped from their parents to NYC to start anew. As Jeanette saw her Mom digging through a Dumpster in NYC, she was a journalist at that time and living on Park Avenue. No judgement here, for the book explains all. The Glass Castle is a detailed account of Jeanette’s incredulous journey. 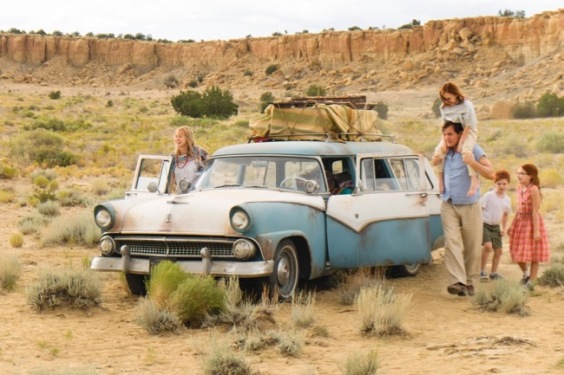 Now, having said all that, I must state that the movie is still a watchable production. Unlike his previous realistic drama Short Term 12 (2013), writer director Deston Daniel Cretton has a tall order here: from the massive field of information in the memoir, to glean and pick just a few episodes to include in the film and string them up as a whole, while making them as interesting and captivating as the book. I know, Cretton must eliminate and condense, the difficult task of a movie adaptation.

Cretton chose to focus on the love hate relationships between father and daughter, and the actors have delivered, thanks to the performance of Woody Harrelson as Rex and the actors who play Jeannette as a youngster, Ella Anderson, and as adult, played by Academy Award Best Actress Brie Larson (Room, 2015). Harrelson is spot-on and dominates the screen.

Mom Rose Mary is played by Naomi Watts. And with this character, I feel there may be a miscast here. For one thing, since the film is heavily weighed on Rex, mom has a much minor role, which is a shortfall, for she does contribute to the children’s development, and taught them to appreciate reading, art, and the value of resilience, using the Joshua Tree as an object lesson, bent but alive. In my mind, Laura Dern could be a more suitable cast.

While the book is chronological, the movie juxtaposes the past with the present. It is done quite well, no confusion or disjointed feeling here. The editing is smooth and moves both storylines forward effectively. The scene of the accident when Jeanette has to cook as a young child and is burned badly is placed aptly at the beginning of the movie. Scars that can be seen visually is a good reminder of one’s past where memories could fade.

One of the main differences between The Glass Castle the book and the movie adaptation is distance. The book is intimate and close. Walls is such a straight forward writer that it feels like she’s right there sharing, opening up herself candidly to the reader. With the movie here, we are just like that, sitting afar as a spectator. It took me a while to engage.

The major issue is the mood. The book depicts a nomadic existence as Jeanette was growing up. The children were herded from place to place across States, often as dad Rex escaped from debtors. They had slept open in the Mohave desert, so, they could pick their own star as a present. Surely these may all be a disguise for their plight, euphemism offered by irresponsible parents. But none can deny the thrills and exhilaration of escapades and adventures. The togetherness of the siblings, the wonder of life are apparent in Walls’ descriptions. The word ‘dysfunctional’ had never appeared in my mind as I read the book.

The film however, focuses on the darker side. The abusive and volatile Rex dominates the screen. Poverty and gloom take over. The tipping point comes as the eldest Lori graduates from high school, and she makes an exit plan. We breathe an air of relief as the children one by one escapes to NYC. A few years later though, Rex and Rose Mary move out to be with them, so they can all be together again as one family.

Is a family being together always the best? As we see, togetherness may not be an ultimate good to pursue when harmony is impossible to reach. What’s more important is keeping oneself intact, one’s past reconciling with one’s present, the integrity of self. In the film, that is the turning point for Jeannette in the scene at the restaurant with an important client of her husband’s. Jeannette comes out from hiding about her family, albeit at the most inopportune moment.

The final scene is a beautiful wrap. The Walls gather together to have a family meal after Rex has died from illness. The siblings chat about their formative years in laughter. Resilience and loyalty to each other have kept them intact. A rewarding closure and a beginning towards a better future.

Do stay behind to watch the video of the real life Jeannette with her mom Rose Mary as the ending credits roll. And do sit through the credits until the very last line, wherein lies the emotional punch of the whole film:

“To all families, despite the scars, still find a way to love.”

16 thoughts on “The Glass Castle: From Book to Screen”