Ah… Summertime, and the viewing is breezy.

Even if you didn’t know the composer is George Gershwin, or Ella Fitzgerald’s voice doesn’t come to mind, you’d probably know I got the line from something bigger than it is, as the original song lyrics had made its way into our communal usage through the years… “Summertime, and the livin’ is easy.”

Here lies the very original story idea of the movie Yesterday: what if there’s no collective memory of The Beatles, except one person. And it happens that this guy is a struggling, busker kind of a singer songwriter on the brink of giving up his music and submitting to a career as a warehouse grocery stocker. Imagine, what would he do now? 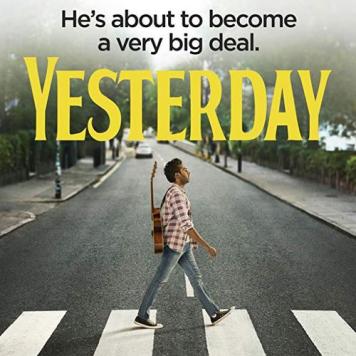 Richard Curtis, whose expertise is writing rom coms, best known for Notting Hill, Love Actually, Bridget Jones and not the least, Mr. Bean, seems to have gone on a breezy trip imagining his newest work. Director Danny Boyle as well, reprises his rags-to-riches gist as in Slumdog Millionaire to create another fantasy. Yesterday looks to have the privilege of a dynamic duo of movie magic, and it seems they’d planned it as a summer joy ride.

To enjoy a fantasy, viewers have to drop their guards and suspend rationale. Stop trying to reason how a 12 seconds global blackout could wipe out the collective memory of The Beatles, both human and online memory that is, while one man, Jack Malik (Himesh Patel), being hit by a bus right at that moment, wakes up to find he has lost only his two front teeth but his memory is fully intact.

In his hospital bed, Jack says to his manager Ellie (the ubiquitous Lily James), who has had an unrequited crush on him since their junior high days, “will you still need me, will you still feed me when I’m 64?” Sure, but why 64? She asks. There’s the first clue.

Later when he gets out of the hospital, his close friends gift him a new guitar to replace the one that’s crushed by the bus. Keep on writing songs, they encourage him. So he sings his newest for them, it’s called “Yesterday”, and they’re almost moved to tears. Here’s the beginning of a world-wide sensation, Jack Malik, the one man show, creator of fresh, hit songs, and the rest is (new) history.

Now consider another premise, or maybe a philosophical construct: if a lesser known gallery painting is taken out of its frame and thrown on the sidewalk, will people have recognized it as a work of art? In parallel, if the collective memory of The Beatles had been wiped out and a Beatles song is sung by Jack Malik, a dowdy guy who doesn’t have the slightest sense of charisma, will it be a hit? Will it ever be turned into a classic? Well, too much thinking here. This is a rom com after all.

Curtis wants to humour us with quick, spontaneous laughs, and he delivers. Like showing us the Google search results for The Beatles when all such memory is lost, or when the less than attentive parents of Jack’s mistakenly remember the title of his new song as “Leave it be”. Or when Ed Sheeran, yes, the real Ed Sheeran, advises Jack on how to create a better song title, “Hey Jude” is a bit old-fashioned he tells him. “Hey Dude” sounds just right.

Kudos to the filmmakers, Jack’s Indian descent isn’t mentioned; he’s just another dude. It’s a kaleidoscope of humanity on our streets, no need to explain. As for the plagiarism issue, no worries, Boyle and Curtis deal with that at the end. So you can leave the theatre at peace with your conscience if you happen to really like the movie.

Jack’s friend and sidekick Rocky (Joel Fry) reminds us of Spike (Rhys Ifans) in Notting Hill, adding both sparks and silliness, especially in the weak, second part of the movie where it feels gas might have run out. As for Jack meeting a guru type of a guy called John in the last act feels an unnecessary add-on. Now Curtis really had run out of ideas.

On another note, I can’t seem to find much chemistry between James and Patel for them to a strike up an intimate relationship. Maybe they’re following to the dot the exact storyline, quiet, unrequited lover meets oblivious subject. Albeit I do see a chance there which unfortunately the director and writer had not pursued further.

The movie can be enriched if James is given more opportunity to perform. In Mamma Mia! Here We Go Again, as young Donna, James has shown herself to be a natural singer and dancer. There’s just one scene in Yesterday, maybe for a minute or less, where we see her character Ellie singing along with Jack in the recording studio. The story could be richer in content and more entertaining if James is given a chance to shine by accompanying Patel in some of his songs. After all, there were four harmonized voices that made up the Fab Four. Further, James’ participation in the music-making could beef up the story and open wider the road to romance as well.

Yesterday has an ingenious idea for a fantasy, Sheeran’s appearance as himself is marvellous. While the storyline turns weak and hard to sustain in the middle of the movie, the 15 Lennon-McCartney compositions save the production. Augmenting Patel’s singing with James’ collaboration would enhance the story and be more entertaining.

So for the overall production, I’ll give 2.5 Ripples, but I’ll still post this as a ‘Fresh’ on Rotten Tomatoes, for the originality of the concept as well as the memory of the Beatles numbers, especially for certain demographics among us.

10 thoughts on “The asset of ‘Yesterday’ is recalling Beatles memory”