Here are several films coming out this fall/winter that are based on books. Usually features given a release date during this time come with some buzz as the awards season has kicked off. Surely there are also those that are from original screenplays, a few are highly anticipated titles as well. Another post for them.

Here’s a list of upcoming book to screen features. Some are in theatres already. 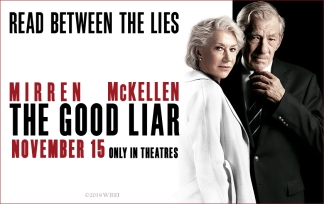 This is an interesting premise: From an online dating site, two people meet, each having an agenda of his/her own. They are octogenarian con artist Roy and his seemingly easy, slightly younger prey Betty, a wealthy widow. Played by two veterans of the stage and screen, Ian McKellen and Helen Mirren, just to watch their performance would be pleasure enough, not to mention how the plot thickens. Bill Condon directs. Based on the debut novel by Nicholas Searle; the name BTW, is a pseudonym. The author is a former UK intelligence officer before turning full-time writer. Now that’s intriguing. 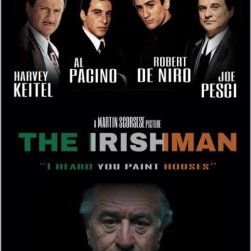 A highly anticipated Scorsese movie and it’s based on a book; many of the director’s works are.  This one is adapted from Charles Brandt’s true crime novel about the ‘Irishman’ Frank Sheeran, the hitman who murdered Teamsters boss Jimmy Hoffa. Screenplay is by Steven Zaillian, the Oscar winning writer who adapted Schindler’s List for the big screen. A Scorsese cast with Robert De Niro as Sheeran, Al Pacino, Joe Pesci, Anna Paquin. Limited release in theatres, then on Netflix, which makes it another potential clash with studio gatekeeper Spielberg. 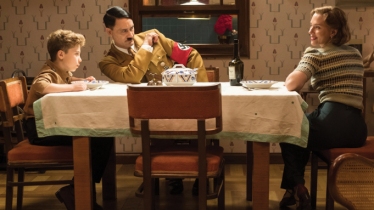 Winner of the Grolsch People’s Choice Award at TIFF 2019. The award has always been cited as an indicator of Oscar Best Picture, like last year’s The Green Book. But just like last year, the feature is embraced by viewers but received mixed reviews by critics. Billed as an ‘Anti-Hate Satire’, the farcical rendition is helmed by New Zealand director Taika Waititi who also stars as Adolf Hitler, a caricature and imaginary friend of 10 yr. old Jojo going through tough times towards the end of WWII. Scarlett Johansson and Sam Rockwell co-star. The movie is loosely based on the book Caging Skies by New Zealand-Belgian novelist Christine Leunens. How much has Waititi taken out from the book and how much is his own imagination? A good case study of the boundary and definition of movie adaptations.

Edward Norton has wanted to make the movie ever since he read Jonathan Lethem’s detective novel, a 1999 National Book Critics Circle Award winner. So, it’s taken him 20 years to do it, himself being the screenwriter, director, actor, and producer. Norton plays Lionel Essrog, a detective with Tourette’s syndrome, a disorder which afflicts him with involuntary tics. While keeping the location in NYC, Norton has changed the time to the 50’s from 1999, thereby introducing some nostalgic designs and costumes, and noir for taste. Cast includes Gugu Mbatha-Raw, Willem Defoe, Bruce Willis, and Alec Baldwin.

It has been 25 years since the last full feature adaptation of Louisa May Alcott’s classic Little Women. This updated remake is in the hands of Greta Gerwig, whose Lady Bird (2017) brought her two Oscar noms, for Best Director and Original Screenplay. But what left an indelible memory for me is her role as Frances in Noah Baumbach’s Frances Ha (2012). Now thinking back to her character Frances, a young dancer striving on her own in NYC, it shares the spirit of Jo March in Little Women: independent, fresh, and authentic. Great cast with Saoirse Ronan, Emma Watson, Florence Pugh, Timothée Chalamet, Laura Dern, Meryl Streep. A film I most look forward to this holidays season.

For all ye ailurophiles and musical lovers. Based on T. S. Eliot’s collection of poems Old Possum’s Book of Practical Cats, Andrew Lloyd Webber’s Cats is hailed as one of the biggest hits in theatrical history on their website. Director Tom Hooper has another musical-turned-movie under his belt: Les Misérables (2012) which won 3 Oscars. Attractive cast in Cats the movie: Idris Elba, Jennifer Hudson, Judi Dench, Rebel Wilson, Ian McKellen, James Corden, Taylor Swift.