From an online dating site, two people meet. They are two seniors, con artist Roy (Ian McKellen) and his seemingly easy prey Betty (Helen Mirren), a wealthy widow. That’s all I knew about the movie before I went into the theatre. When I came out, I was surprised by its intensity and scope. Not something I’d expected. Definitely not a romantic dramedy but a suspense thriller that drops hints along the way and slowly peels off its layers of disguise. 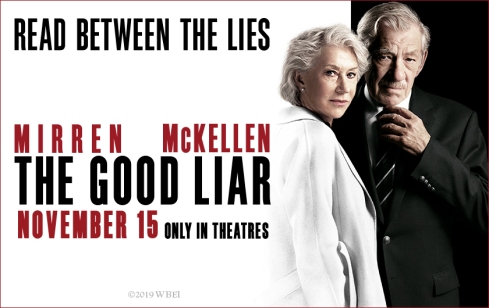 That’s all I’m going to say about the plot because any more details I give out would diminish your enjoyment. However, I’m sure there are those who, like me, had never expected the personal history behind these two characters. Some might have been caught so off guard that they’d find the story preposterous. To them I say, it’s no more preposterous than Gone Girl, or The Debt, or Inglorious Basterds, which Roy and Betty watch in the movie. The interplay between Mirren and McKellen more than compensates for the lack of plausibility in the revealing of truth in the latter part. Further, it’s these elements of surprise that make the movie entertaining. Take it as pure escapism.

The Good Liar is based on the debut novel by British author Nicholas Searle, a pseudonym. The author worked as a UK intelligence officer before becoming a full-time writer. After watching the movie now I’m piqued to read the book, not to explore deep subject but just for its structure, to see how Searle tells his story interweaving the present and the past. This is one good case for not reading the book before watching the movie.

Mirren and McKellen, two British acting icons for the stage and screen, deliver a captivating performance playing off each other and enjoying themselves too, by the look. Director Bill Condon deftly leads us on to some revealing that makes one think twice about the meaning of the title. Condon directed Dreamgirls (2006) to two Oscar wins and received a Best Writing Oscar for adapting Gods and Monsters (1998) and a nom for his screenplay for Chicago (2002).

Other cast members include Jim Carter and Russell Tovey, both lending good support. I admit I have to try hard to cast away images of Mr. Carson of Downton Abbey when I watch Carter in The Good Liar, no matter how modern his hairdo.

Cinematographer Tobias A. Schliessler (A Wrinkle in Time 2018; Beauty and the Beast, 2017) offers some interesting vantage points, in particular the aerial shots in several scenes. The beginning of the movie grabs our attention right away with the credits being typed out on screen and a high angle shot of the two main characters connecting online on a dating site, then pulling in closer. The extreme close-ups of their eyes prepare us for intrigues. The story moves right in wasting no time. Overall, just watching the duo play off each other is entertaining enough.