Yesterday while driving I heard the stirring theme music of the movie The Piano (1993) played on CBC Radio 2. Memories flooded my mind. I recalled watching it in the movie theatre way back then. A deaf-mute unable to speak but can overwhelm others as she plays the piano to express herself.

I thought of Jane Campion, writer/director of the film, marvelled at her skills in conveying thoughts and emotions via the visual medium, and thought of other women directors who’d helmed many of my favourite films. I’ve had two previous posts on Women Directors here and here. Now taking stock mentally of the recent movies and series I’ve watched on Netflix, Amazon Prime, and Kanopy while home-staying, I notice several of them are created and/or directed by women. 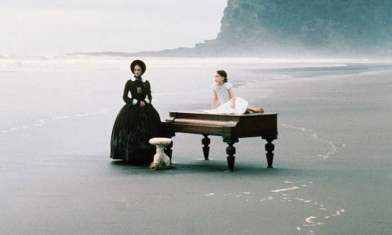 Consider the following list with my capsule reviews an update of my previous Women Directors posts.

Director Heller and the screenwriters transport Mr. Roger’s child-friendly, essential human wisdom to realistic, adult situations. The film isn’t so much about Mr. Rogers but the real-life story of journalist Tom Junod’s life-changing encounters with Fred Rogers for a magazine assignment. Tom Hanks is ideal as Mr. Rogers, and Matthew Rhys is effective in playing journalist Lloyd Vogel.

Who’s Matthew Rhys, you might ask? I highly recommend you watch “The Americans” series. Or, if you’re an Austen spinoffs fan, he’s Mr. Darcy in the mini-series “Death Comes to Pemberley”, adaptation of the novel by P. D. James. And, if you were around to watch the original Raymond Burr detective series on TV, the Wales-born actor is the new Perry Mason in our time.

The 8-Episode mini-series is the screen adaptation of Asian American novelist Celeste Ng’s second novel. My full book review can be found here. The thematic elements of race, motherhood, family secrets, clashes of generations and values are visualized and made more acute as Kerry Washington is cast as an African-American artist playing against Reese Witherspoon as Mrs. Richardson, the gatekeeper of the white upper-middle-class community of Shaker Heights, OH. The artist Mia Warren in Ng’s novel isn’t black, but turning her into one makes the conflict of the story more timely and pressing.

Four episodes are directed by Lynn Shelton who sadly died in May, 2020. Another female director Nzingha Stewart helmed two.

Never have I Ever (Netflix) – Created by Lang Fisher and Mindy Kaling. Directors Linda Mendoza and Anu Valia

Here’s a recent trend that’s encouraging. Movies and series are created to feature minority cultures in America. The talented Mindy Kaling, who wrote the screenplay and co-starred with Emma Thompson in Late Night (2019) plus many other credits, created this comedy series about high school girl Devi’s experience growing up Indian-American, something Kaling knows full well. Many LOL situations and dialogues throughout the ten episodes. Kaling scouted Maitreyi Ramakrishnan in Mississauga, ON, Canada, to play Devi. A fresh look into the multi-cultural humanity that our North American population comprises. In recent years we talk a lot about representation. This is a humorous and realistic look into a vibrant sector.

The Half of It (Netflix) – Directed by Alice Wu

Here’s another lens to look into our younger generation growing up bi-cultural. The full length feature directed by Chinese-American Alice Wu is this year’s Tribeca Film Festival’s Best Narrative Feature winner. A shy academic ace, Ellie Chu, earns her pocket money from writing essays for her fellow classmates. When one day, she’s recruited by the school jock Paul Munsky to be a ghost writer of poetic love letters to a girl he tries to date, Ellie begins to feel a moral dilemma. The characterization and storyline make this feature a contemporary twist on Shakespeare’s Twelfth Night. Humor is situational with some poignant scenes, making the film all the more enjoyable.

Inspired by the memoir of Deborah Feldman, who broke away from her strict Hasidic Jewish community in Brooklyn, NY, and escaped to Berlin where she changed into a new persona and started a different life. I haven’t read the memoir but I know the four-part mini-series take the liberty to re-imagine how she goes about changing her life while in Berlin. The series is captivating as viewers are introduced to the Hasidic, male-dominated and authoritarian community. Again, there are many cultural sectors in our society and through films we get to know a little bit more of how others live and the struggles they go through.

Adaptation of the book by Lisa Klein, screenplay by Semi Chellas, Ophelia is a re-imagined story of what happened in the royal castle of Elsinore and in particular, Hamlet’s sweetheart. Lots of liberty in tweaking and twisting but still interesting to watch, albeit a lightweight Hamlet compared to the original. Notable cast includes Naomi Watts as Gertrude, Clive Owen as Claudius. Hamlet is played by George MacKay before his titular role in the WWII movie 1917, and Ophelia is Star War‘s Rey Daisy Ridley.

A filmed recording of the play performed in Royal Exchange, Manchester. This Hamlet is a fresh take with Maxine Peake as the emotionally devastated and revengeful Prince of Denmark. Only after watching that I Google search to find the first female to play Hamlet dates back to 1796 in London Drury Lane, then 1820 in New York. Several others had followed since. But this is my first time watching. Maxine Peake’s performance almost instantly cast away all my preset feelings. She’s high-octane energy; her voice, physical stage presence totally captivate, convincing yet delicate. She’s herself and not an impersonator. Modern costume makes it more natural and, love her haircut. Peake makes me look at her not as a female taking up a male role, but a superb actor playing the ‘Everest of roles’.

11 thoughts on “Recent Movies and Series Directed by Women”