The Reader is the highly acclaimed novel by German writer Bernhard Schlink.  It was first published in 1995 in Europe and the English translation came out two years later.  Anthony Minghella (Cold Mountain, 2003) was said to be the original director of the film adaptation, with his friend Sydney Pollack (Sketches of Frank Gehry, 2005) producing.   Their untimely death sadly altered the scene somewhat, even though they were still named as producers when the Awards Season arrived.  Thus the poignant acknowledgement from Kate Winslet as she received her Oscar Best Actress Award.

Selected as a New York Times Notable Book and a Los Angeles Times Book of the Year, the novel’s 218 pages are packed densely with poignant images and thought-provoking moral questions.  The first part takes place in the 1950’s. 15 year-old Michael Berg gets sick on his way home from school and is helped by a woman, Hanna Schmitz.  Thus sparks the sexual encounter and later love affair between the two.  Every time they meet, Hanna makes sure Michael reads to her literature from Homer to Chekhov.

After a while, Hanna disappears, and not until Michael becomes a law student does he see her again, this time in a post-war trial of Nazi criminals.  Hanna turns out to be a guard at a concentration camp during the Holocaust.  As Michael is awash by torrents of conflicting emotions while watching the trial, he is aghast at a personal secret Hanna refuses to reveal, one which could have saved her from a lengthy prison term.  Her only statement of defence is wrapped in one sentence:  “What would you have done?”  She asked the judge.

The last part of the book is in the present day.  Michael, now a lawyer, is still haunted by his past and the residual emotional ambivalence upon the release of Hanna from prison.  The story wraps up with a heart-wrenching ending.

Hidden behind the romantic facade is a story that deals with a deeply complex set of moral issues; the love affair between a 30 some year-old woman and a 15 year-old boy is only the initial spark.  This is not a Holocaust novel, but rather, an incisive depiction of psychological dilemma confronting a new, post-war generation in Germany.  The moral burden that Michael faces is heavy, seemingly unresolvable and yet born by the collective psyche:

I read the book  a while back but have delayed seeing the movie, directed by Stephen Daldry and screenplay by David Hare (both of The Hours, 2002).  First off, I could imagine the film, having the advantage of transporting the literary into visual realism, can go all out gratuitously to depict the love affair between Michael and Hanna.  Further, the very complex moral issues the book deals with would be a challenge to transfer into film, making it less effective and maybe even trivializing the crux of the matter.

Both Winslet and Kross have delivered a most affective cinematic rendering of an otherwise despicable affair.  Winslet has brought out an exceptional performance, from a simple and passionate young woman to a grey-haired, seemingly amoral and yet deeply tormented prisoner.   The irony of the movie is that, by crafting a visually appealing cinematic offering, it has won over its viewers’ heart (especially Winslet fans), resulting in a much more sympathetic rendition of someone who has a hand in the death of hundreds of Jews under her guard.

Likewise, the portrayal of the older Michael (Ralph Fiennes) is less effective than it deserves.  Maybe due to his limited scenes, it appears that Fiennes lacks the time to dwell himself fully in the character to elicit the spectrum of conflicting emotions.  It may also be the weaker script, compared to the book, that has shrouded some critical issues with ambiguity.

But I did appreciate the scene where a distressed Michael consults with his professor (Bruno Ganz), who  distinguishes between law and morality.   The law has nothing to do with right or wrong, he tells Michael.  What’s legal doesn’t make it right.  Implication follows that duty and legality do not excuse wrongdoings.  While the  law regulates the behavior, it is morality that constrains the heart.

While the movie is appealing visually and offers some riveting performance, I urge viewers to be the reader.  That’s what I did, re-read the book as soon as I got home, and appreciated the written words even more. 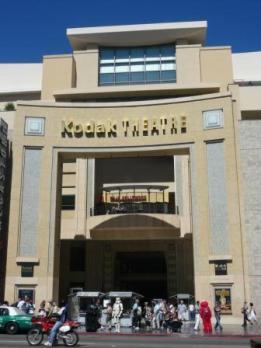 Its major rival, The Curious Case of Benjamin Button, which led the nominations with 13 nods, took only three golden statuettes, mainly in the technical categories.

Actually, the Academy Awards Show itself may well be the winner, thanks to a talented, Tony Award winning Hugh Jackman. After the slumping ratings in the past few years, the Oscars could well have been resuscitated last night.  Which previous Oscar host can sing and dance Broadway style so naturally, and bringing out the musical talent of Anne Hathaway at the opening gig, plus performing a tribute to previous musicals from West Side Story to Mamma Mia! with Beyoncé?  And, who says it takes a comedian to crack jokes?

Speaking of musical numbers, who could have thought the two songs of Slumdog Millionaire, with traditional Indian melodies, can be performed together with the other nominee, “Down To Earth” from the Sci Fi Animation Wall E.,  a collaboration of John Legend and A. R. Rahman.   It was a colorful post-modern rendition of musical fusion.

Entertainment aside, there are some moving moments that I’ve appreciated:

A word about Slumdog Millionaire:  The two young actors Dev Patel and Frieda Pinto are the future stars to watch for.  They are poised, articulate, modest, and carry themselves marvellously in the limelight of fame and glamour.  I wish this Hollywood episode is the springboard to further career opportunities.  And for the children who still have to go back to the slums of Mumbai, I hope this experience would open doors for them to a better life in the days ahead.