Hemingway’s voice has been heard the world over. His persona and perspective reflected from his prolific writings. Now fifty years after his death, Paula McLain has gleaned through facts and whatever that’s true to create the novel The Paris Wife, revealing the point of view of Hadley Richardson, Hemingway’s first wife. 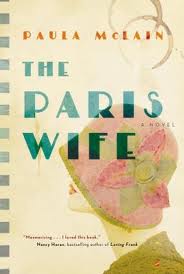 Hadley’s voice speaks from the shadow. It reflects the thoughts of one who had seen it all from the beginning. Within seven short years, she had witnessed the transformation of a disgruntled journalist into a promising, full-fledged novelist. And she was the one who, after only three months of marriage, sailed with Hemingway to Paris and began her fateful role of the ever supportive and loving companion. How we need to listen to her side of the story.

There are those who have read The Paris Wife and then want to read more of Hemingway’s works.  For me, after reading the book, I want to read more of Paula McLain’s.  It’s interesting that her MFA is in poetry, and that she has published two volumes of poetry collections before this novel. I wonder if it takes a poet to write prose like this, highly sensitive and nuanced, while surprisingly void of ornaments. I find the no-frills narrative style of McLain’s a bit like Hemingway’s, spare and direct, like his memoir A Moveable Feast. Consider something like this as Hadley recounted her earlier life:

And everything was very good and fine until it wasn’t.

What wasn’t fine is an understatement. It’s ironic that what happened to both Hadley and Ernest was quite similar. A domineering mother and a depressed father whose fate led to suicide by a self-inflicted gun shot wound. We know now that Hemingway himself could not escape such a fateful end himself.

But from the start, it was love at first sight for Hadley and Ernest as they met in a house party in Chicago, after Ernest returned home from the war. He was 21, she 29. A year after they met, on September 3, 1921, they were married.

Hadley’s voice captured me right away from the very beginning. I like her down-to-earth persona, her self-deprecating anecdotes as a simple American gal in Paris among the ‘lost generation’. I like it that she played Rachmaninoff and Chopin and not jazz-savvy. I like her ignorance in fashion and avoidance of the dazzling Parisian glitz and glamour:

If the women in Paris were peacocks, I was a garden-variety hen.

It’s interesting too reading how other writers advise Ernest. They point to the bare essentials, as Hadley recalls Gertrude Stein saying:

Three sentences about the color of the sky. The sky is the sky and that’s all. Strong declarative sentences, that’s what you do best. Stick to that.”

As Stein spoke Ernest’s face fell for a moment, but then he recovered himself. She’d hit on something he’d recently begun to realize about directness, about stripping language all the way down. “… leave only what’s truly needed.” She’d said.

Or this from Ezra Pound:

Cut everything superfluous… Go in fear of abstractions. Don’t tell readers what to think. Let the action speak for itself.

Hadley was with him all the way. When she was later pregnant, Hadley felt the need to go for better birthing care in Canada to deliver her child. I was amazed to read about such a currently hot issue in their time. They sailed to Canada in September, 1923. One month later, Bumby was born.

They lived on the fourth floor of an apartment on Bathurst Street. And since I’m in Toronto now as I write this review, I’m able to go over there and take these photos for my readers. Currently, the building at 1597-1599 Bathurst Street is a comfortable and elegant looking five-storey apartment aptly named The Hemingway. 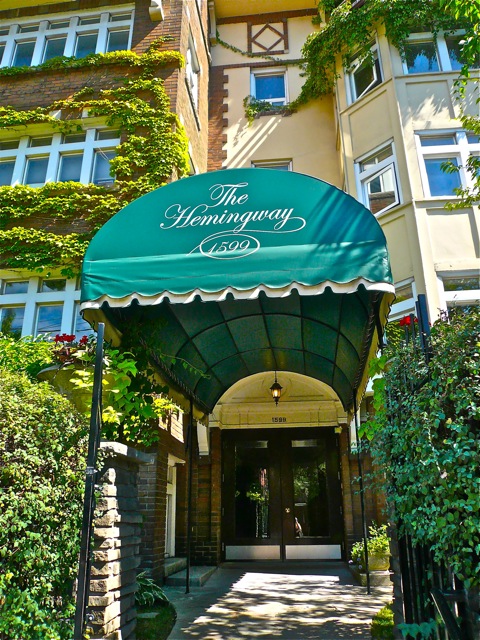 A plaque is placed at the entrance to mark this historic site:

American-born Ernest Hemingway (1899-1961), internationally renowned author, lived in this apartment building 1597-1599 Bathurst Street, in 1923-24, while working as a journalist for the Toronto Star, where he became friends with novelist Morley Callaghan and writer/broadcaster Gordon Sinclair. He returned to Paris, France, where he began his career as a novelist, producing such masterpiece as “The Sun Also Rises”, “A Farewell To Arms”, & “For Whom The Bell Tolls”

Ernest had worked for the Toronto Star before, and had developed an amicable working relationship with his boss John Bone. But this time he encountered tumultuous problems with his new boss, causing him to shorten his stay. This is what I found a block away from The Hemingway apartment:

Four months after their son Bumby was born, in January, 1924, the Hemingways sailed back to Paris. Upon seeing Gertrude, Ernest said:

I know we meant to be gone a year, but four months is a year in Canada.

I just can’t help but smile upon reading this. Interpret whatever way you will.

Once back in Paris, Ernest discarded his journalist hat and went all out to pursue his dream of a published writer, encouraged by his mentor Gertrude Stein. He began to be noticed and gain publishing success. And with success came fame, and fame, a different circle of friends, richer, more glamorous and drunk. Within their group of acquaintance, people were falling for each other’s spouses, messy and totally lost.

Hadley began to fall out of it all. One time at a tense exchange among the group, she was so fed up that she had to excuse herself and left early with Don Stewart, their writer friend. And here’s the sentence that leaves such an impression on me:

“Before we’d even gotten to the door, the gap had closed around the table and you couldn’t even tell I’d been there.”

The American journalist for Vogue magazine Pauline Pfeiffer soon became Ernest’s new preoccupation. She had not only won his heart, but Hadley’s trust and friendship. But the balance was bound to tip. Hadley’s innocence was soon shattered by betrayal from both her friend and her husband; her naivety ebbed away as she watched helplessly the painful disintegration of her marriage and small family.

I’d chosen my role as supporter for Ernest, but lately the world had tipped, and my choices had vanished. When Ernest looked around lately, he saw a different kind of life and liked what he saw. The rich had better days and freer nights. They brought the sun with them and made the tides move. Pauline was a new model of woman and why couldn’t he have her…

When I think back on Hemingway’s memoir of those Paris years, A Moveable Feast, in which he writes about his early love with Hadley, I can’t help but feel for both of them. How can we command our own feelings, passion, love? The bull fighting scenes in Pamplona which mesmerized Ernest so had become such an apt metaphor… the bulls charging madly through the narrow streets towards the ring, aroused by a mere spot of red, driven by brute instincts and raw impulses, yet all come to the same gory end in the ring.

In the book, McLain has their writer friend Don Stewart declared:

I can take the bulls and the blood. It’s this human business that turns my stomach.

You might ask: “But is this all true?” After all, this is only a novel. From his notes on A Moveable Feast, Hemingway stated that all was fiction. Conversely, in McLain’s The Paris Wife, she has this quote from Hemingway:

There’s no one thing that’s true. It’s all true.

Looks like it’s for us readers to pick and choose.

Midnight In Paris, a film by Woody Allen.