The discussion that follows involves major plot points. Spoiler Alert. If you have watched the movie, you’re welcome to share your views in the comment section.

The film begins with an excerpt from Henrik Ibsen’s play The Master Builder. In the context of the play, Solness, the Master Builder, is fearful of the young, specifically, the draftsman he has taken under his wings, Ragnar. Solness’ anxiety lies in his apprehension that one day, soon, the young Ragnar would open shop on his own as a full-fledged builder, surpassing him and rendering his life work obsolete. He has the following exchange with a young lady friend Hilda:

Solness: … Wait and see, the young will come here, thundering at the door! Breaking in on me!
Hilda: Then I think you should go out and open your door to the young.
Solness: Open the door?
Hilda: Yes. Let them come in to you – as friends.

Writer/director Noah Baumbach sets the stage for a contemporary story with the parallel of Solness in his main character Josh Shrebnik, 44, aptly played by Ben Stiller. Josh is a documentary filmmaker who may have passed the peak of his career, his latest project dragging on for ten years without new grant money coming in. In the continued education class where he teaches documentary filmmaking, he meets a hipster couple in their 20’s, Jamie (Adam Driver) and Darby (Amanda Seyfried). Jamie expresses great admiration for Josh, feeding him what he needs. Soon, Josh and his wife Cornelia (Naomi Watts) become fast friends with them, and begin to drift away from their peers, new parents Marina (Maria Dizzia) and Fletcher (Adam Horrovitz).

In Frances Ha (2012), Baumbach brought us a positive profile of youth embodied in co-writer and star Greta Gerwig. Gerwig grasped the gist of youth beautifully by portraying an aspiring young dancer in NYC finding her way to a career and to her own true self. In Frances we see a delightful image of the young. Here in While We’re Young, Baumbach presents another view on youth. He does it by juxtaposing hipsters with the middle-aged, leading the audience through a revealing and interesting story. While the brunt of the laughs falls on the older pair Josh and Cornelia, the ultimate revealing is on the younger generation. 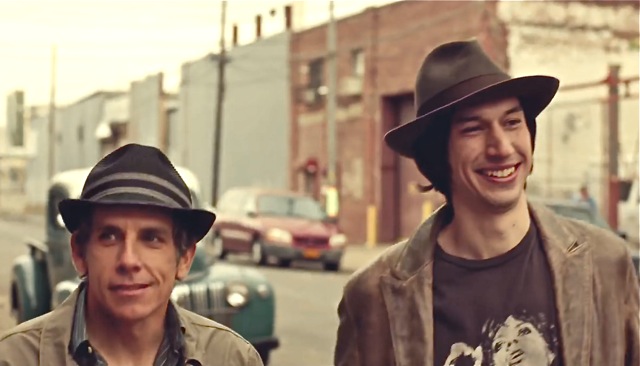 What makes the movie rich and intriguing is that what looks like a simple, single storyline embeds multi-layered thematic materials. On the surface, Baumbach lets us laugh at Josh and Cornelia, forty-something, childless, needing to come to terms with aging but not until one last attempt at rejuvenation. Hanging out with Jamie and Darby makes them feel young again. Josh dons a fedora hat, wears hipster shoes, rides a bike to keep up with Jamie. Cornelia goes with Darby to a hip hop dance class, and stressed herself out with the moves. For more flavour, both try the new experience of detoxing through a vomit inducing potion in a shaman party. Watts sure can keep up in her comedic act with Stiller, just right in juggling between depth of emotions and light-hearted fun. After St. Vincent, where she plays a small, funny role alongside Bill Murray, Watts has proven once again that she can wear the comic hat suitably.

On another level, we see Baumbach contrasting the ironic lifestyle choices in a sequence of fast cuts. We see the middle-aged couple using iPhone to Google once something comes up, while Jamie and Darby just try to remember and recall the info. Googling is too easy; they don’t want instant answers. If they can’t recall, they’re contented with not knowing. I can’t get enough of these subtly planted Baumbach jokes. As Josh listens to CD’s on his laptop, Jamie enjoys his wall to wall collection of vinyl records, played on a turntable. Jamie makes his own table, Darby makes ice cream from scratch. They ride a bike to get around. Their hipster lifestyle totally grabs Josh as genuine and cool; impressing him even more is their generous and open demeanour. A budding documentary filmmaker, Jamie invites Josh to co-direct his film. Josh is totally sold.

Ben Stiller is a natural when it comes to playing a clueless, de-valued character like this one. In Greenberg (2010), his previous collaboration with Baumbach, he plays a similar role, middle-aged and lost in the flow of life, also touched and changed by a youthful character (Greta Gerwig). It’s easy for us to laugh at Stiller, a greying forty-four-year-old hipster-wanna-be trying hands-free cycling following Jamie but only for a short two seconds before he twisted his back. The back will soon heal, but it’s “Arthritis” on the knees that the doctor is more concerned about. The joke there in the doctor’s office is just too good for me to include here. And, when did he last have his eyes checked?

As the story develops however, we begin to see Josh having second thoughts. Maybe Jamie’s work isn’t as authentic and spontaneous as it looks. Adam Driver is perfect in projecting a fused expression of innocence and mischief. His calculated moves startle Josh. Herein lies a crucial, contentious thematic element. There’s a fundamental breach of integrity. Is Jamie ignorant about ethics or is he simply amoral? Isn’t a documentary supposed to present truths? To what extent can it be staged or its ‘facts’ twisted? Nil, according to old-schooled Josh; such methods are fraudulent, crossing ethical boundaries, inexcusable. To Jamie, it’s no big deal, “it doesn’t matter that it’s fake.” To us the viewers, this third act is the juice in the meat. Josh’s indignation is justified.

But then, Baumbach pulls back, as if being too harsh on young Jamie. As I think about the notion of authenticity in the movie, I realize it comes in different forms, not only in documentary filmmaking, but with the actual life these characters are living. A love for retro and owning a collection of vinyl records don’t mean Jamie has real experience living in the 60’s. Or for Josh, imitating hipster fashion doesn’t make him young, as his friend Fletcher says: “You’re just an old man with a hat.” Taking an example from a recent real-life happening: when we see a veteran news anchor faking accounts to add glamour and self-importance to his reporting we know age is not the dividing line for authenticity. So maybe Baumbach has a point there by cutting Jamie some slack at the end. In the last scene, Josh, wiser now, utters: “He’s not evil; he’s just young.”