(It is impossible to review The Tree of Life without writing about what it is about, hence: Spoiler Alert for this post.) 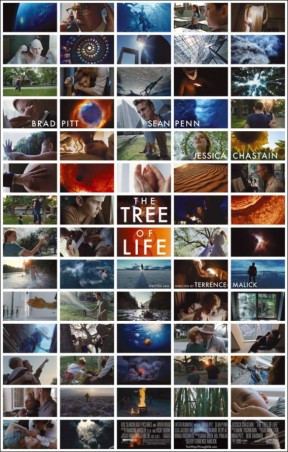 “The Tree of Life” is the fifth feature film in the forty-year career of the reclusive director Terrence Malick. It received mixed reactions at the Cannes Film Festival in May this year. There were boos and applause. That it finally won the top prize at the festival, the prestigious Palme d’Or, indicates which side was gratified. But, it is a film that needs to be experienced personally before one takes side, and maybe seeing it more than once.

Watching the film is an experience in itself. It starts off with this quote from Job 38: 4 and 7:

Where were you when I laid the foundation of the earth? When the morning stars sang together  and all the sons of God shouted for joy?

Upon such visuals we hear a voice over:

From the macro scale of the universe we now focus on the micro, something with which we can identify, a family. We see it from the point of view of Jack O’Brien (Sean Penn). An architect now, Jack is haunted by memories of his past, in particular, the death of his younger brother at age 19. We see scenes of his parents receiving the bad news. We hear his yearning for the people he loves through his whisper in voice over: ”Brother, mother.” We are then privy to Jack’s childhood days in 1950’s Texas.

From the O’Brien family we see how grace and human nature play out. Jack’s childhood in Waco, Texas, begins in innocence. With a capable father (Brad Pitt) and an almost angelic mother (Jessica Chastain) who is loving, nurturing, grace manifest, young Jack’s (Hunter McCracken) early days are blissful. Two younger brothers later, the siblings form a close bond. But as the boys grow older, the father becomes stern and strict, callous with his sons, demanding total obedience, expecting love where the seeds of fear are sown. From this character, we see human nature manifest in its destructive, self-seeking mode.

Other incidents further shatter the once blissful young life. Jack goes to town with his mother and brothers, he sees a crippled man make his way awkwardly across the street. He also witnesses the unlawful being arrested. While at the swimming pool, he watches a boy drowned despite frantic rescue. We hear young Jack’s whisper in voice over: “Was he bad? Where were you? You let a boy die.” The problem of pain, suffering, and evil begin to churn in his mind. Direct questions to God, not unlike Job.

Watching his father’s harsh handling of his sons, young Jack slowly discovers that he himself too has the latent capacity to not just think, but to commit wrongs, “I do what I hate.” In a moving scene, after he has hurt his little brother, Jack becomes remorseful and asks for forgiveness. We see the power of love at work. We also see his innocence slowly taken over by conflicts in his heart, love and hate, good and evil… grace and nature.  The second part. 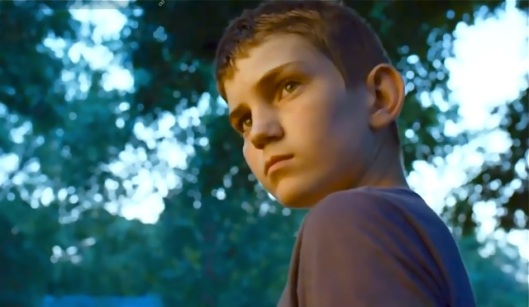 Jack’s father loses his job and the family has to leave town. The uprooting is the most painful the boys have experienced. Everything is lost, it seems, friends, the house, the neighborhood, memories, … But among the loss, we hear the graceful voice of Jack’s mother: “The only way to be happy is to love. Unless you love, your life will flash by… Do good, wonder, hope.” Yet poignantly, she experiences the most devastating blow later, the death of her own son. We hear her heartbreaking whisper in voice over: “Where were you? Did you know?” Again, reiterating the questions that were on Job’s mind.

But ultimately light takes over darkness. We are assured that all is not lost. We hear Jack’s yearning whisper, like a prayer: “Keep us, guide us, to the end of time.” In the eternal scheme of things, shown by the display of the magnificent cosmic visuals, we see all members of the O’Brien family reunite and bathed in a warm bright light. Jack once again embraces the ones he loves, his mother and his brothers. He also stands shoulder to shoulder with the one who has inflicted in him the mixed emotions of pain, anger and love, his father, now reconciled under the brilliant light.  The third part.

Yes, we have the big names. Sean Penn as adult Jack appears only sporadically. Brad Pitt nails his role as the stern and difficult father. The relatively new film actor Jessica Chastain is grace embodied. In an interview she recalls that director Terrence Malick had asked her to watch a lot of Lauren Bacall movies to prepare for her role. But the most impressive of all is Hunter McCracken playing young Jack. The casting is brilliant here. His mesmerizing portrayal of a conflicting boy incubating the later character of a tormented adult Penn is deeply moving, a reflection too of Malick’s sensitive direction. As with his other films, cinematography is superb. You’ll have plenty of time to savour the long sections of cosmic and natural wonders.

“The Tree of Life” is for the patient viewer. It is a slow movie, and rightly so. You have to take the two hours and eighteen minutes as a respite from your busy schedule, and experience the film as a quiet meditation on life, family, God, and relationship with Him. It is also a portrait of love, faith, doubts, and promise. It poses questions in whispers, and answers with majestic visuals in silence, and at times, in engulfing themes of torrential music. Smetana’s “The Moldau” still flows through my mind at 4:30 a.m.

Boos or applause, what does it matter? To quote Bresson: “All is grace.”

CLICK HERE to read my post on another Malick film, Days of Heaven (1978), which won an Oscar for Best Cinematography.

26 thoughts on “The Tree of Life by Terrence Malick”