On Dec. 29 of last year, I posted “Year End Tally and 2012 Outlook“, and I thought that would be it. The two challenges I’ve taken up for this year, the Graham Greene and the Ireland Reading, would be sufficient in lieu of any new year’s resolutions. Further, there will always be movie reviews and other choices in reading on the spur of the moment.

Along came the new year and another opportunity. Thanks to Mrs. B of The Literary Stew, who suggested to me a read-a-long of Salman Rushdie’s Midnight’s Children, I gladly accepted the idea. We’re excited that Bellezza of Dolce Bellezza and Colleen of Books in the City will also be joining us. I know that on Bellezza’s blog, she has a few who have shown interest. You’re invited to hop on as well.

Salman Rushdie’s Midnight’s Children won the 1981 Booker Prize. In 1993, it was awarded the Booker of the Bookers trophy, the best novel to have won the Booker Prize for Fiction in the Award’s 25-year history. I admit I haven’t read any Rushdie before, so I just thought this would be a good one to start. Do click on the link above to Booker’s website for the synopsis and bio.

Another major reason for my interest in reading it this year is that its film adaptation is currently in post-production. Acclaimed Canadian director Deepa Mehta (Water, 2005) is at the helm of the production. Rushdie is closely involved in the process with Mehta in condensing his novel into 130 pages of screenplay. Filming has already been completed in Sri Lanka. According to IMDb, it will be released this fall. 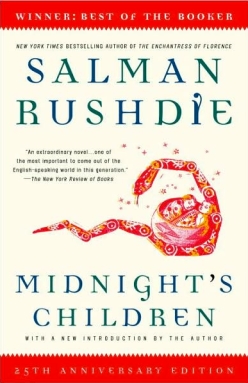 My copy is the 25th Anniversary Edition. It has 533 pages. Considering the dense writing and the historical backdrop of the novel, it sounds like a book that calls for reading camaraderie and dialogue. Also, we’ve decided to take it slow. By so doing, we can also pursue other readings or blogging activities while doing this.

So here’s our plan. The novel is divided into 3 sections, with the middle the longest, so we’ll split it in two. We’ll begin reading in March. One month for each part. Review posts are to be posted according to the following schedule:

You’re welcome to join us in this slow read. Just indicate in the comment section and leave a link.